Meliá proud of its upscale presence in Punta Cana 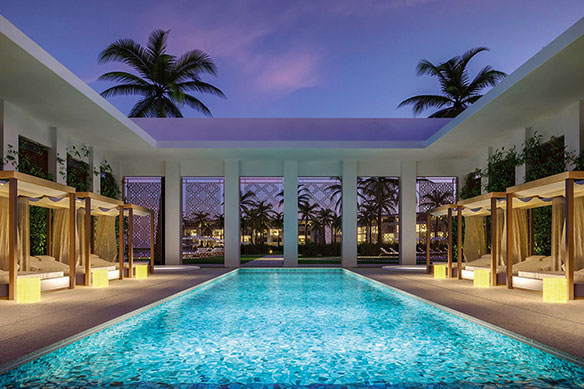 (Photo above: The Grand Reserve)

The Grand Reserve among other things has 108 guest units with swim-up pools for those eager to experience a luxury vacation in the Dominican destination.

And says Alan Duggan, Melia’s regional business development VP for the Americas, the property is the hotel company’s most upscale all-inclusive in the Americas and reflects a growing trend in Punta Cana.

“We are seeing Punta Cana slowly going luxury,” he says, adding The Grand Reserve – which opened in December – is “specifically focusing on families and leisure travellers, not groups.”

John Iannini, Meliá Hotels International’s VP of business travel/ meetings & events America, says The Grand Reserve has something of a “residential feel” to it, “so you feel like you’re in your home.”

“We’re delivering a luxury product to a niche market,” he continues, among other things citing a particularly high staff-guest ratio.

The hotel is physically separate from the Paradisus Palma Real.

Meliá is a major presence in Punta Cana. Among its properties is the 544-room, adults-only Meliá Punta Cana Beach Resort, which was recently relaunched after a $30 million renovation.
The Meliá Caribe Beach, also in Punta Cana, welcomes people of all ages.

Meliá now has 42 properties in the Americas – excluding Cuba, where it has 34 and is a dominant presence among foreign hotel companies – with those properties ranging from the United States all the way south to Argentina.

Among the multiple Meliá brands found in this hemisphere is Paradisus, its luxury all-inclusive offering. Duggan says Paradisus is increasingly “focusing on nature, including sustainability,” and citing the plan to have the new Playa Mujeres in Cancun enable those who have just stepped inside the hotel to be “exposed to nature, whether it’s jungle or sea,” thanks to an open-air lobby design.

Meliá is also attaching more importance to what Duggan labels experiences that can provide the likes of a food station in a lobby, for instance or coffee outside of restaurants. Outdoor food stations and Illy coffee corners can be found in Paradisus resorts.

Technological investments are taking place as well, with those attending a outdoor business gathering at a Meliá property in Punta Cana and then forced indoors to a conference room because of inclement weather able to see images of the beach they were viewing outdoors appear on the conference room’s white walls, thanks to three-dimensional video mapping. “We bring the beach inside,” Duggan said.

Duggan says Paradisus is enjoying “strong recognition” in the Canadian market. He says the luxury properties aren’t inexpensive, but states they provide “value for money.”

Those opting for an added degree of luxury at a Paradisus can choose the adults-only Royal Service or the Family section, he continued.