Minor brings a touch of Thailand to Portugal 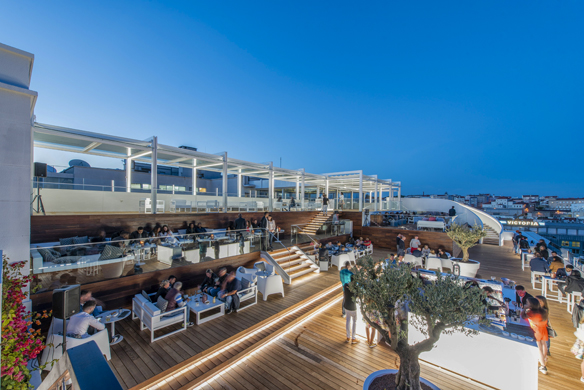 Pictured above: The Sky Bar at Tivoli’s flagship hotel in Lisbon serves drinks in a lofty setting.

The hospitality industry in the most westerly country in continental Europe is now being shaped in part by the Far East.

Minor converted a Tivoli Algarve property to the Anantara Vilamoura, making Portugal the first and to date only European country to have a resort by Thailand’s Anantara chain, known for its upscale retreats.

“We are very proud [of Portugal being Anantara’s first European destination],” Cristina Borges of Minor Hotels’ Algarve office told Canadian Travel Press of a property in which guests can find the likes of Portuguese and Thai restaurant dishes, Thai massages in the spa and even a couple of tuk tuks – smallish, open-air, three-wheeled vehicles that normally serve as taxis on Bangkok streets – to carry people between the resort and the ocean-fronting beach and beach club. Regular shuttles are also available.

Big investment
The Anantara Vilamoura is about five minutes from the beach and surrounded by an Arnold Palmer-designed golf course.

The course has an individual offering golf instruction, but who is called a guru “because he knows a lot.” There are also experience and wine gurus on hand for guests.

Minor promotes the hotel as one of the top five in the Algarve.

The Algarve is seen as a year-round destination, with its mild winters meaning that visitors can play the likes of golf any month. Tourism officials add that the region – known primarily for its beaches – is also culturally interesting, among other things having architecture that tells of the long Moorish presence there. 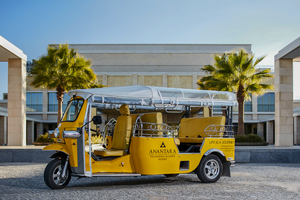 The only Anantara property in Portugal and indeed all of Europe has tuk tuks to shuttle guests to the beach.

Andrea Granja, spokeswoman for Tivoli, said Minor has invested a lot of money in its Portuguese operations, with, for instance, the Tivoli Avenida Liberdade Lisboa seeing major renovations that were completed last year and included the redoing of guest rooms and the lobby, and the addition of a restaurant. The five-star hotel is Tivoli’s flagship, found on a trendy Lisbon street and dating back 85 years. “It’s where the Tivoli brand was begun,” Granja says of the hotel, which includes the rooftop Sky Bar among its amenities. Opera singer Maria Callas and pop singer Beyonce are among notables who have stayed in the hotel.

Acquiring more
Another Tivoli property is found in Sintra, a town close to Lisbon that served as a retreat for Portuguese royalty, which is reflected in its having royal structures, and which also enchanted famed British poet Lord Byron. The 30-room property “could be your grandmother’s house if she was a queen,” Granja says.
Tivoli has over 10 properties in Portugal, about half in the Algarve. The brand also has five-star properties near the coastal Brazilian city of Salvador and Sao Paulo, Brazil, as well. The Salvador-area resort is in a sparsely populated area, and the builder was conscious of the environment, with the structure not rising over a mature palm tree and having a program to help safeguard endangered sea turtles. The Sao Paulo hotel, in turn, has a 750-square-metre presidential suite, reportedly the largest presidential suite in all South America.

Tivoli also has properties in Qatar – two in its capital of Doha – with visitors able to experience both modern and traditional.

Among other brands Minor has acquired is Spain’s nh Hotels.