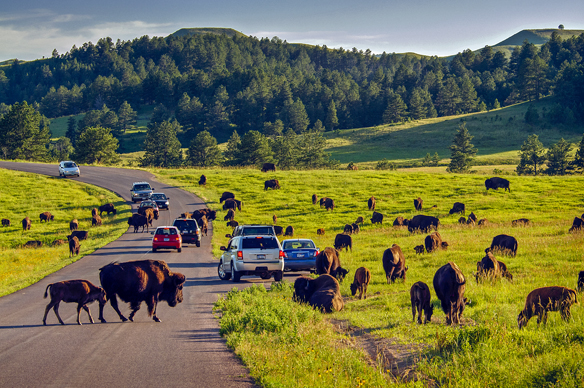 Pictured above: Free-roaming bison can be seen in Custer State Park.

In fact, they’re actually an intriguing sort of place that have landscapes that often seem lunar-like and are marked by buttes, canyons, pinnacles and spires, says South Dakota Department of Tourism spokeswoman Richter, noting the state’s Badlands National Park is marking its 80th anniversary this year.

The Badlands were so named by area Indians before European settlement because rugged, often dry terrain could be challenging to cross.

But that’s no longer the case, Richter says.

“The nice thing about the Badlands is you can go out and touch and feel and climb in them,” said Richter, adding visitors can opt for easy or extreme experiences, with the latter including multi-day hikes through terrain that are inhabited by the likes of bighorn sheep, bison, bald eagles, coyotes – whose eerie howls can be heard after sunset – and a host of other creatures.

“It’s like you’re on an underground sea bed or on the moon,” Richter said of the “very jagged, rugged” and changing terrain.

Badlands National Park is only one of a number of showcases for South Dakota wildlife, with Richter pointing to Custer State Park as another locale home to various creatures, including a herd of 1,300 bison, as well as elk, speedy pronghorn antelope and mountain lions, with those elusive cats hard to see.

Those seeking a subterranean experience can opt for visits to Wind Cave National Park, described as one of the world’s longest “complex caves” and which has a “maze of passages.” Jewel Cave, a US national monument, has hundreds of miles of mapped and surveyed passages and can be explored in different ways, including lantern tours. Richter said some cave tours are relatively easy, while tighter squeezes await serious spelunkers.

But Richter added that South Dakota has a sub-surface attraction not related to Mother Nature, with Minuteman Missile National Historic Site allowing people to descend into a reminder of the Cold War. The site once housed intercontinental missiles, and visitors today can ride by elevator to a suspended capsule, in which personnel once sat before switches that could activate a missile. The capsule itself is suspended by “massive chains,” a engineering decision aimed at absorbing the shock of any Soviet attack on it, Richter reported. A shovel was also placed there to allow people to try to dig themselves out if any attack led to rubble collapsing on top of them.

Other features include a code-burner used to destroy the daily codes delivered to the missile site. The area has another site that enables visitors to look through plexiglass onto the top of a now-deactivated missile.

Richter added that her state is associated in part with Mount Rushmore, which has the images of four US presidents carved from a side of the mountain. But another project begun by the man responsible for Mount Rushmore will feature an image of Sioux [Lakota] warrior Crazy Horse and will actually dwarf Mount Rushmore when the decades-old project is completed, she said.

Indians account for much of the state’s population, and many communities are interested in sharing their heritage with visitors, Richter continued.