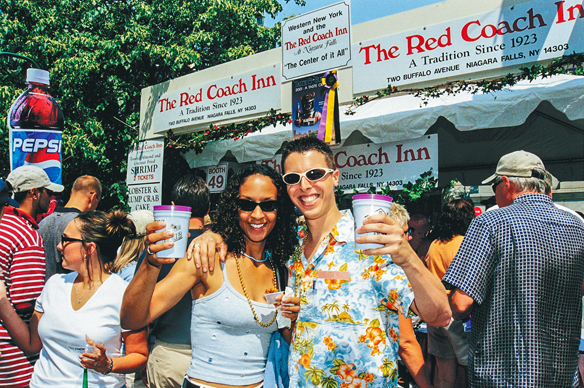 Pictured above: Buffalo has a lively culinary scene.

“Everyone has heard about Times Square and the Statue of Liberty,” Markly Wilson, the division’s director of international marketing, told a recent Toronto gathering. “But I’m not quite sure how many know about Genesee [County].”

Among those in the delegation was Monica Stage of Buffalo’s Martin House, which she labelled a “beautiful, unique, historic house museum” that was a “wonderful masterpiece” by famed architect Frank Lloyd Wright. Wright himself labelled the residence a “domestic symphony.”

Dan Pawlowski of Buffalo River History Tours, in turn, told the gathering that his firm’s waterborne tours “focus on the past, present and future of Buffalo. You see Buffalo from a different perspective – from the water.”

Vibrant arts scene
Buffalo has seen “a lot of revitalization within the last 10 years,” he continued.

The eastern terminus of the Erie Canal is in Buffalo, added Pawlowski, who said Buffalo River History Tour’s Spirit of Buffalo is the “flagship” of his city.

Leah Mueller of Tour Buffalo Niagara noted the city’s attributes include a wings trail that features around a dozen restaurants offering a type of dish first created in her city.

The evening also heard from Rachel Laber Pulvino of Visit Rochester that Rochester’s George Eastman Museum – named after the founder of Kodak – is “the oldest museum dedicated to photography in the world.”

Laber Pulvino also praised the “vibrant” arts scene in her city and said the city’s Strong Museum National Museum of Play – which showcases toys – is the “ultimate play destination for all ages.”

Museum visitors can see the likes of the first Monopoly board.

Meanwhile, Greg Stanford, the US consul-general in Toronto, praised the “many exciting and diverse attractions of New York State,” adding that over three million Canadians visited it in 2016.