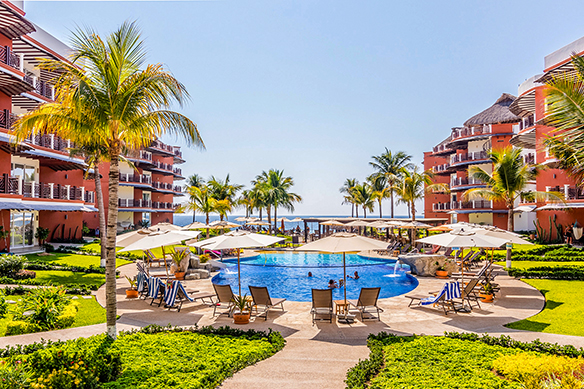 Former national ski team member Cary Mullen has gone from life in winter’s extremely fast lane to now hosting winter-weary refugees in a sun-soaked part of the world that will never experience the sort of snow Mullen saw growing up in Banff.
Mullen – whose resume includes 11 years on the national ski team, which led to him competing in the Albertville and Lillehammer Winter Olympics; winning on the World Cup circuit; and setting a skiing speed record of 151 kph in Kitzbuhel, Austria – is the developer and president of Vivo Resorts Mexico, which offers both homes and vacation stays in in quaintish Puerto Escondido, on Mexico’s Pacific Coast.
Vivo Resorts is billed as a $200-million, 75-acre, gated beachfront community within 10 minutes of downtown Puerto Escondido, among other things viewed as one of Mexico’s top surfing spots.
So how does someone who was born in Calgary, grew up in Banff and made a name for himself in ski racing adapt to dividing his time between a Mexican development where winter’s unheard of and Calgary?
Actually, quite easily says Mullen, who says his entrance into real estate development isn’t all that remarkable.
Mullen notes that he comes from a “third-generation” real estate family, got his realtor’s licence at 19 and began making real estate acquisitions when he was 21.
He later decided he wanted to build a resort in a sunspot, after having experienced “snow 12 months a year for 15 years” thanks to a national ski team regimen that has members training year-round. That was tantamount to having seen “as much snow as a 90-year-old man.”
Mullen visited 12 countries looking for a suitable resort locale and found it in Puerto Escondido, a place he states has the best weather in North America. Visitors will find temperatures in the 80s every day, ocean water that is warmer than that in the Caribbean or Hawaii and rainfall is a rarity in Puerto Escondido, he adds.
Vivo Resorts Mexico opened six years ago, and those staying at it are offered an all-inclusive option.
Those guests will also find a destination that Mullen says is free of the “hustle and bustle” that many better-known and larger Mexican resorts areas have, and also has 12 miles of beach that provides what he labels a “real serenity. It’s just a great place to come and rejuvenate.”
Among those who have stayed at the retreat are other former national ski team members, who joined Mullen at a warm-weather reunion.
Mullen – who has dabbled in surfing while in Puerto Escondido and still skis while in Alberta – says his ski team past bolstered confidence among others when the Puerto Escondido property was being considered.
And he adds he doesn’t regret that overseeing a Mexican resort development receives more of his attention these days than schussing.
“I’ve done so many miles on the hills,” he notes. “I’ve got other passions now.”