A sure winner at sea 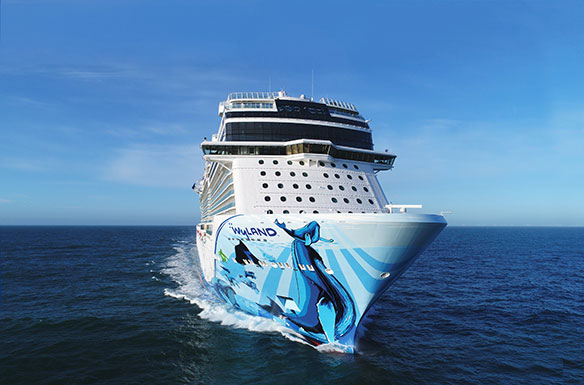 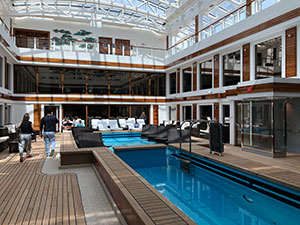 As the first cruise ship specifically designed with features and amenities for sailing in Alaska, Norwegian Cruise Line’s (NCL) new Norwegian Bliss is taking the cruise experience up a notch.
The 4,000-passenger Bliss is the third ship in the line’s Breakaway Plus class and 16th in its fleet. Unique features include a large, 180-degree Observation Lounge – perfect for Alaska cruises – the largest race track at sea and the line’s most extensive Haven to date.
Speaking with Travel Courier during a recent inaugural event aboard Bliss in New York City, Andy Stuart, president and chief executive officer of Norwegian Cruise Line, said he’s very pleased with the ship and the initial feedback from guests.
“I’m absolutely thrilled. The reception to the ship has been equally positive from media, travel partners and the guests who sailed with us across the Atlantic,” he said. “I’ve had only really positive feedback on the experience, both the look and feel of the ship and the team that’s on board [as well as] the dining experience and entertainment – I mean, every element of the ship.”
Norwegian Bliss features the best of other NCL ships, as well as several new experiences.
“We have elevated Norwegian Bliss’ on-board experience to new heights, bringing the best features from across our fleet plus exciting new first-at-sea activities like the largest race track and new dining concepts to create the ultimate cruising experience.”
Continuing its tradition of featuring original artwork on its ship’s hulls, NCL commissioned Wyland, one of the world’s premier marine life artists, to design the hull art for Bliss.
The attention to detail on board is evident throughout, from unique pieces of art and sculptures to the lighting and fixtures, including one of the most impressive chandeliers at sea.
One of the ship’s most unique features is the largest competitive race track at sea, a first for any North America-based cruise ship. The two-level electric-car race track sits at the top of deck 19, offering guests great views, while they twist and turn at speeds of up to 30 miles per hour.
The electric cars run silent, but guests still get the full racing experience while channeling their inner Andretti, as the sounds of a race car engine are piped in through speakers in the cars’ headrests. Guests get eight laps of racing fun for US$7.
Other entertainment features include an open-air laser tag course, the Aqua Racer waterslide at the expansive Aqua Park, highlighted by two multi-storey waterslides, one of which extends over the edge of the ship and loops down to the deck below. There’s also an expansive pool and sundeck with two pools and six infinity hot tubs.
Junior cruisers can splash their way to fun at the Kids’ Aqua Park, a watery wonderland of splash pads, water cannons, tipping buckets and slides. The little ones will also have a blast at Splash Academy, the fleet’s complimentary youth program.
Teens aged 13 through 17 can enjoy their own space aboard Norwegian Bliss on deck 5, at Entourage, adjacent to the ship’s arcade. The exclusive teen space features plush lounge furniture, gaming stations, foosball, air hockey and a dance floor.
Culinary enthusiasts can take in new specialty dining and bar concepts such as the Texas smokehouse – Q, where guests can indulge in authentic Texas barbecue. The new à la carte restaurant offers a selection of brisket, ribs, chicken and sausages, freshly smoked over hickory, oak and pecan woods.
At Los Lobos, flavours travel south of the border with Mexican cuisine, which made its debut in 2016 aboard Norwegian Dawn. Los Lobos offers an upscale, modern take on traditional favourites like fresh guacamole prepared table side, al pastor tacos, enchiladas de mole, handcrafted margaritas featuring private-label Patron Barrel Select, Norwegian’s own tequila blend, and more. Featuring indoor and outdoor seating located on Deck 8, Los Lobos is located adjacent to Cagney’s Steakhouse. 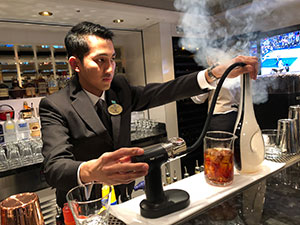 Making the perfect ManhattanOther signature à la carte restaurants include French cuisine at Le Bistro; the tastes of Tuscany at La Cucina; fresh seafood at Ocean Blue; global fusion cuisine featuring sushi, dumplings, handhelds, and more at Food Republic (highly recommended); Cheeseburgers in Paradise at Jimmy Buffett’s Margaritaville at Sea; Teppanyaki, the Japanese hibachi steakhouse, and handmade cupcakes and macarons at The Bake Shop.
In a new complimentary dining concept, The Local offers guests pub fare in a relaxed neighbourhood atmosphere 24 hours a day.
Bliss also features the line’s first full-service Starbucks at sea, and Coco’s where sweets and treats are served up day and night.
At The District Brew House, guests can enjoy a variety of craft cocktails and beers, including local Seattle favourites from Red Hook Brewery.
The Cellars, A Michael Mondavi Family Wine Bar, offers a curated wine list featuring 35 grape varietals including top selections from Washington-area vineyards, Tuscany and Michael Mondavi’s own Napa Valley Estate, as well as light bites from La Cucina. Interactive educational seminars and tastings are available daily.
New programming aboard Bliss includes the Tony Award-winning Broadway musical, Jersey Boys, and ¡Havana! – an original musical theatre show created and produced specifically for Bliss.
The new ship also features a new theatrical cocktail hour experience, Happy Hour Prohibition – The Musical that transports guests to a New Orleans speakeasy on the eve of the Prohibition era. At The Cavern Club, guests can enjoy their favourite Beatles songs live with a very talented cover band, in a setting inspired by the Liverpool Club where The Beatles famously performed countless times. For fans of The Beatles, this is a must-do.
The fun continues in Bliss’ expansive casino featuring hundreds of slot machines and table games. In a first for Norwegian, the casino offers smoking and non-smoking areas.
For agents with guests looking for a more luxurious experience at sea, there’s The Haven, NCL’s exclusive ship within a ship concept, featuring butler service and private key card access. Situated on Decks 17 and 18, The Haven has 80 rooms and suites, as well as its own concierge, private restaurant, lounge and pool area. Note: a few Haven Suites are also located on Deck 15, with guests having full access to The Haven Enclave.
Other accommodations include studio staterooms for solo travellers, featuring virtual ocean views, and plenty of connecting staterooms, ideal for large groups and families.
In keeping with luxurious experiences, the ship’s Mandara Spa, located on Deck 16, offers the ultimate in pampering with 24 treatment rooms, a full-service salon and barber shop, fitness centre, and thermal suite. In addition to the spa, adultsguests are able to unwind in two private lounge spaces, while at Vibe Beach Club and Spice H2O.
Beginning June 2, Norwegian Bliss will cruise seven-day voyages to Alaska from Seattle with featured calls in Ketchikan, Juneau, Skagway and Victoria, BC. It will then sail select voyages to the Mexican Riviera from Los Angeles and for the fall/winter season sail to the Eastern Caribbean from Miami.
In 2019, Bliss will return to New York City and sail seven-day voyages to the Bahamas and Florida, the Southern and Western Caribbean.
(www.ncl.com) 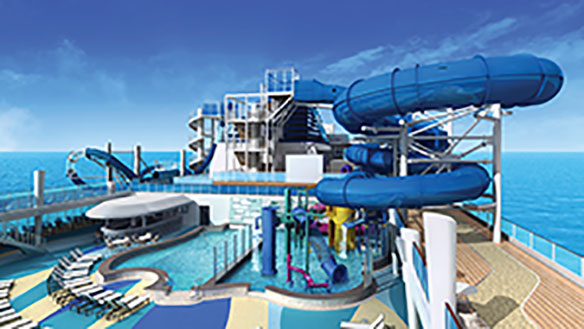