Jet lag lessened on Lufthansa A350 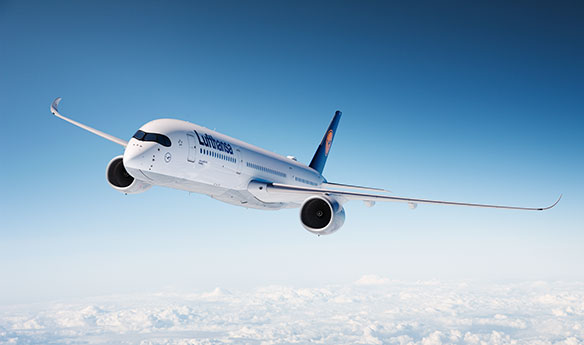 (Photo above: The new Lufthansa Airbus A350-900 inflight)

Flights from Vancouver to Germany are long, at about 9.5 hours, so Lufthansa has eased the jet lag stress by assigning a new Airbus A350-900 aircraft to the Munich route.

With a recently awarded five-star rating for Lufthansa by Skytrax, passengers can expect a top shelf level of service and amenities on board the flight. But, in addition, the A350 offers a benefit that can’t be seen, but will be felt by all those aboard, regardless of their assigned cabin class.
That is, new technology delivers more comfortable pressurization levels within the aircraft. Special materials and construction techniques give the A350 a cabin pressurization rate that is equivalent to a lower altitude than in many current commercial jet liners. With this, passengers are transported in a cabin environment that is pressurized to the equivalent of about 1,800 metres, as compared to 2,400 metres in many others. Due to this, passengers reach their destination feeling more rested and less affected by jet lag.
The Airbus A350-900 is regarded as the world’s most advanced, environmentally friendly long-haul aircraft, says Lufthansa. It consumes less kerosene fuel and produces fewer emissions than other commercial passenger jets – and is quieter on take off – says the airline.
May 1 marked the first day of Lufthansa A350-900 services between YVR and MUC, and the flights are operating on a daily basis until Oct. 27.
With the new aircraft comes new seating capacity. It has 38 more seats, up by 15% as compared to the A330 that previously operated on the summertime route. The YVR-MUC service has been in operation for about five years.
The new aircraft has space for 293 passengers, with 48 seats in business class, 21 in premium economy and 224 in economy class. At just under 5.6 metres wide, the cabin of the new Airbus is more spacious than comparable aircraft.
“Placing our A350 flagship aircraft on the Vancouver route during the busy summer travel season shows how greatly we value and are committed to this market,” said Tamur Goudarzi Pour, Lufthansa Group VP of airline sales for the Americas. “Vancouver passengers will also encounter a significantly enhanced travel experience with many state-of-the-art features and an elevated level of comfort on board the A350-900.”
Lufthansa is the only European airline to have earned a five-star rating by Skytrax. It recognizes a very high overall quality performance in ground and inflight products provided by the airline. A core feature in scoring the rating is a consistency in staff service quality across front-line customer touch points, says Lufthansa.
Skytrax also awarded a five-star rating to Munich Airport – another first for Europe, says the organization. Combined with flights on Lufthansa, the trip to Munich from Vancouver can be regarded as “a 10-star experience,” says Hans DeHaan, senior director Canada for the Lufthansa Group,
The assignment of the A350-900 to Vancouver helps bump overall capacity for western Canada by 7.1% for the year by the Lufthansa Group. This includes the operation of Edelweiss Air flights between Vancouver and Zurich.