Luxury for all budgets 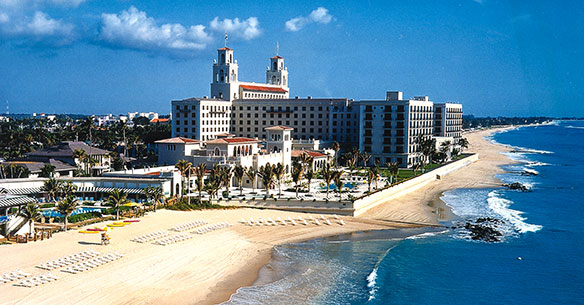 The Breakers is a landmark resort in Palm Beach County.

Tourism officials in Florida’s Palm Beach County want to dispel any notion that the oceanside jurisdiction is a retreat for the rich and famous alone.

The destination does have wealthy areas, but Veronica Arrieta, spokeswoman for Discover The Palm Beaches – the county’s tourism promotion board – says those who have relatively modest travel budgets will be easily accommodated there as well.

“There’s so much more beyond the luxury aspect,” she says, citing the likes of hotels that fall under the Best Western and Hilton Garden Inn brands.

But those who wish to go the high-end route on their vacation will certainly be able to do that as well, with the county having “signature properties,” among them The Breakers, a structure that dates back to 1896 and each year invests at least US$30 million to maintain a fresh appeal. This year saw its lobby redone.

The sprawling county is home to 39 cities and towns, encompasses 2,300 square miles and has 47 miles of beaches.

There are over 17,000 hotel rooms and more than 100 family-friendly attractions.

Arrieta notes that visitors will also find 160 golf courses in Palm Beach County, about half open to the public. Those courses include The Breakers’ Oceanside Course, the oldest course in Florida.

Water sports enthusiasts will also find a 900-foot-long mapped snorkeling trail that enables people to see the likes of fish, manatees and sea turtles, and the county also has 150 diving sites, some of them scuttled ships used to create artificial reefs.

Those interested in wellness will find opportunities for the likes of pilates and yoga, with “twilight yoga” held every Monday under a banyan tree found by a lighthouse dating back to 1860.

Arrieta says summertime visitors will find hotel rates are dramatically lower than winter ones, and 12 to 14 county hotels take part in a June-September promotion that offers three free nights for those who pay for three others.

She adds that the county – which she labels the “breadbasket of Florida” – has “fantastic dining.”

As well, area parks have banned balloons, seen as a threat to marine life.

Meanwhile, Palm Beach County is slated to gain six more hotels, among them ones falling under the Mandarin Oriental, Marriott and Hilton banners.

As well, other tourism infrastructure is being upgraded, with the likes of the Kravis Center for the Performing Arts having begun work on a $50-million expansion.

Arrieta notes that October will see Air Canada increase Palm Beach County service to daily departures from Toronto, and there will also be five-times-a-week service from Montreal.