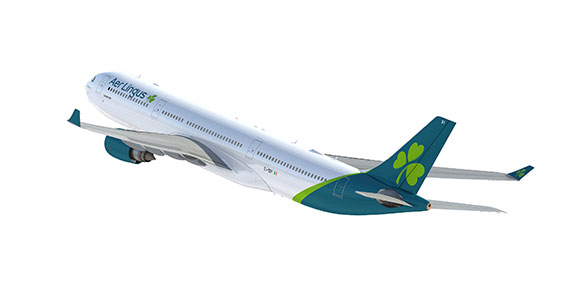 Yvonne Muldoon, director of global OTA’s & regional Sales (EU/NA) for Aer Lingus, leaves no doubt about it, travel agents are a crucial part of the carrier’s distribution network.

In fact, Muldoon was in Toronto recently to meet with Aer Lingus’ travel trade partners here and update them on what’s been going on at the carrier these days.

“The main objective of the visit here in Toronto is to spend some time with our trade partners and let them know the kind of investment we’ve put in place for our Toronto-Dublin service,” Muldoon told Canadian Travel Press.

“We continue to get a huge proportion of our business through our travel agency partners and we’re very appreciative of that business,” Muldoon added.

Muldoon, accompanied by Aer Lingus’ regional sales manager for Canada, June Tiffney (pictured below),  told CTP that the carrier is also committed to further increasing its presence in the Canadian market – whether it’s B2B or B2C – to make sure that “Canadians understand that they have an option of flying across the Atlantic and into Ireland or beyond and on Aer Lingus.”

Muldoon continued: “We may not always be the obvious choice, but we’ve been flying out of this market for a number of years, and we’ve carried close to 600,000 guests over that course of time from Canada into Ireland and beyond.”

Of that number, Muldoon pointed out that “over 35% of Canadians are travelling onwards to Europe with Aer Lingus,” seamlessly transferring through the carrier’s Dublin hub, with the top destinations that they’re going on to including the United Kingdom, Germany, France, Italy, and Spain.

Which leads Muldoon to point out that: “We’re not just an Irish airline serving point-to-point, we’re a global carrier that gives [passengers] the ability to transfer onwards from our hub.”

Out of Toronto, the carrier’s service is year-round – daily in peak season, five times a week during the off-peak season – which has been a critical factor in the growth of Aer Lingus’ transatlantic market.

“That consistency of service year-round is really important, particularly for the corporate market,” Muldoon told CTP.

She continued: “We’ve got a business class cabin and we’ve got an economy class cabin and to have that continuity of service year-round is really important because foreign direct investment is quite big. There are about 75 Canadian companies that have offices in Ireland, so it’s important to provide that frequency in order for the corporate market to be able to fly back and forth between Toronto and Dublin or beyond easily.”

Also of note is the fact that Aer Lingus has recently refreshed its brand for the first time in something like 20 years, with Muldoon observing that it was all about having “a new kind of brand identity to support our ambition to be the leading carrier across the Atlantic.”

But not to worry, while the carrier’s iconic shamrock logo has been updated displaying a slight tilt to represent how dynamic the carrier is, its heart-shaped style still reflects the kind of Irish hospitality that Aer Lingus and the Island of Ireland have long been known for.

And good things have been happening for Aer Lingus since it became part of IAG – which owns such airlines as British Airways and Iberia to name just two – that’s enabled the carrier to invest in its product and in new assets, including new aircraft.

Muldoon observed: “We have to be accountable to our shareholders, so it’s vitally important that we run Aer Lingus as a value carrier and as a very lean kind of operation. As a value carrier, we’re continually ensuring that the cost is at the right level because we’re competing with low cost carriers, but making sure that we’re not compromising on service; ensuring our service is at that four-star level.

Clearly that strategy seems to be working, with Muldoon telling CTP that “our balance sheet has been extremely healthy over the last number of years.”

That’s a good thing as the carrier has an ambitious plan for growth as it looks to increase its transatlantic fleet from the 17 planes it operates today to 30 planes by 2023. 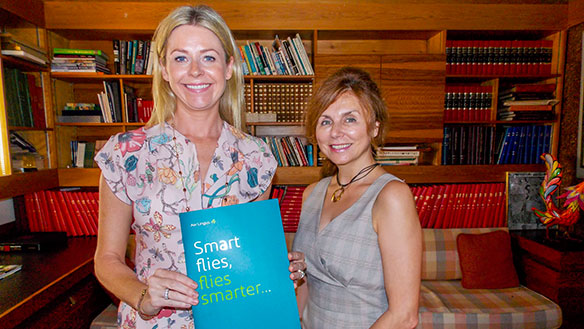 That kind of expansion always suggests it’s time to ask about competition, and out of Canada, there are certainly a good number of carriers operating flights into Ireland.

She continued: “Aer Lingus is a value carrier across the Atlantic. I think our price points are certainly valuable and offer value-for-money, while still providing that exceptional four-star, SkyTrax service. I believe the difference is the fact that we have Dublin as a hub, and it allows our Canadian guests to seamlessly transfer through Dublin onto our short, haul network, and the 35% plus [of passengers] that I mentioned earlier on is allowed that seamless transfer through Dublin on to Europe. So, we’re not just a point-to-point carrier – we really open up Europe to the Canadian market.”

But Aer Lingus’ director of global OTA’s & regional sales for Europe & North America also observed that: “It’s all about supply and demand, and I think there’s enough business here for everybody, and each airline will have their own kind of strategy on what way they fill their aircraft.”

Muldoon said: “For us, it’s part of our Dublin Gateway initiative to connect Canada with Europe, and I suppose that’s our secret sauce. It’s not just about point-to-point traffic. We have the ability to tap into some of those Canadian customers that may have considered going direct – but there’s opportunities to go via Dublin as well and that part of the market is increasing.”

As for the travel trade, Muldoon again emphasized how closely Aer Lingus worked with them, whether the business is coming through the traditional travel agency distribution network – retail agents, TMCs – or through consolidators and wholesalers or through OTAs.

“So, it’s really about leveraging each channel and trying to increase the business through all channels and because it’s really the guest that makes the decision on how they want to acquire their ticket. Whether it’s through an OTA, whether it’s through AerLingus.com or whether it’s going into a traditional travel agent, there’s certainly no particular vertical that is excluded from our remit anyway,” she said.

As for her message to the trade, Muldoon said: “First of all, we certainly appreciate the business from the Canadian travel trade, and we don’t take it for granted. We certainly want to work really closely with the travel trade across Canada and we’re very proactive on the ground and we have a local sales manager here – June Tiffney – who works hand-in-hand with our travel trade partners.”