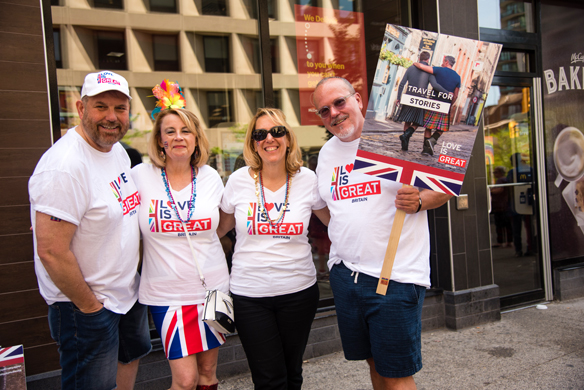 The latest night clubs, art galleries, theatre productions and dining rooms are not the only motivators for Canadian LGBTQ holiday-makers planning a trip to Great Britain.

The LGBTQ Leisure Travel to Britain has revealed that the country’s historical attractions are, in fact, the top travel motivators overall for LGBTQ visitors, with 76% sightseeing at famous buildings and monuments, and 68% visiting castles, historic houses or historic attractions on their trips.

The survey also found that Britain’s countryside and outdoor activities appealed strongly to LGBTQ travellers. Two-thirds of those surveyed were interested in exploring small towns or the countryside in Britain.

The survey also confirmed that many of these travellers do indeed enjoy the vibrancy of Britain’s cities, with London, Edinburgh, Glasgow and Manchester the top four cities for overnight visits. Fashionable London neighbourhoods like Hoxton in Hackney and “Voho” in Vauxhall are favourites for LGBTQ travellers.

Going to the theatre was also cited as a motivator, particularly for gay male visitors, and also for repeat visits to Britain. Plays that are popular in London theatres at the moment include Everybody’s Talking About Jamie, The Inheritance and The Tina Turner Musical.

Gay pride parades in various British cities are also considered travel motivators, and this year the parade in Cardiff, Wales is getting particular attention, as it celebrates its 20th anniversary. Well-attended Pride parades are also held in cities like Brighton, Manchester and Glasgow. And Birmingham, Leeds and Newcastle are amongst the cities that are very gay friendly, said Paul Gauger, senior VP for the Americas for VisitBritain.

“It is no wonder Britain is such a popular destination for the LGBTQ community with our vibrant cities, unparalleled cultural offerings, stunning countryside and world-class attractions,” said Gauger.

“We also know that global competition for visitors is fierce and people have a lot of choice. We must continue to highlight the equality and openness of Britain, while addressing barriers to travel, promoting our message of welcome and value and highlighting experiences that appeal to LGBTQ visitors from Canada,” he said.

New research figures by VisitBritain give Great Britain the number-one ranking amongst seven other European countries for popularity amongst Canadian LGBTQ holiday-makers. Britain came out ahead of Spain and the Netherlands tied in second place, then Ireland, France, Germany and Italy.

The survey also indicated that Britain was one of the most welcoming countries for Canadian LGBTQ travellers, with 95% agreeing that Britain is an “LGBTQ-welcoming place to travel.”

The British government is celebrating LGBTQ+ rights by marching in Pride parades and hosting LGBTQ+ events in 29 cities across the Americas this year, including five cities in Canada. In doing so, it is supporting the Love is GREAT campaign by VisitBritain.

This will be the first year for the VisitBritain will march in the Calgary Pride parade, and it will also host an LGBT film event in Calgary. It recently took part in the Pride Toronto parade, and brought a colourful double-decker bus to party, staffed by sixty VisitBritain participants, including the British High Commissioner.