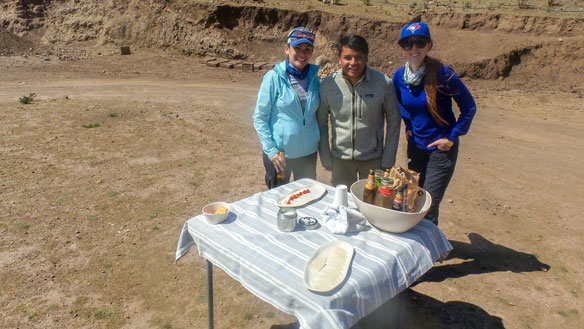 Pictured above: Veronika Macas (r) of Butterfield & Robinson joined explora’s Lucy and Julio for refreshments after ompleting a hike in the Andes offered by explora Valle Sagrado.

Chilean resort company explora, which has a lodge in Andean Peru’s Sacred Valley, has teamed up with a prominent Peruvian chef who has created a menu featuring many Andean ingredients that reflect the valley’s biodiversity.

Virgilio Martínez, one of the best-known masters of Peruvian cuisine worldwide, and a graduate of Ottawa’s Le Cordon Bleu, says he appreciates the explora philosophy.

“We think we should work on projects that are unique and not replicable. The opportunity offered by explora Valle Sagrado, in that location, in that environment and with that nature, is very motivating and enriching. What inspired me the most to work together was the philosophy that explora has as an experience, this is very much in tune with what I feel, do and say,” said Martinez.

Local flavour
This menu was created jointly with a local identity that conveys the area’s biodiversity and was achieved thanks to Martinez’ knowledge about the Sacred Valley, supplies, techniques and tools. It was five months of work in the planning phase, which, for the chef, represented the least difficult part of the process.

“At explora, we design unique explorations, so that travellers can experience a real discovery and, without a doubt, gastronomy is not separate from this concept, everything has the same consistent message. For us, food is one more point of immersion in the area. With Virgilio we always talk about a curious phrase that defines our concept quite well, people have to feel that they are eating the environment, that’s what we aim for,” commented José Rosemberg, general manager of explora Valle Sagrado.

Explora will begin offering the new menu in May.

Ideal option
explora’s Sacred Valley lodge, which is near Machu Picchu, is promoted as the ideal option for all travellers who want to get to know the region in depth. The “stunning lodge architecture and all-inclusive rates create an ideal base camp for exploration,” explora says. Chef and restaurateur Martinez is the creator of Central Restaurant, which has been on The Best Restaurant in Latin America three years in a row, as well as two years on The World’s 50 Best list. He also owns one-Michelin-starred restaurant Lima in London. Also featured on Season 2 of Netflix Chefs Table, Martinez, graduated from both Le Cordon Bleu Ottawa, Canada and London, England.

explora Valle Sagrado was designed as a headquarters from which to explore a remote destination: Machu Picchu and the Sacred Valley of the Incas. Its explorations aim to design memorable experiences both indoors and outdoors. All its programs include lodging, transfers, meals and drinks, and a selection of daily explorations which are chosen by travellers on a daily basis.