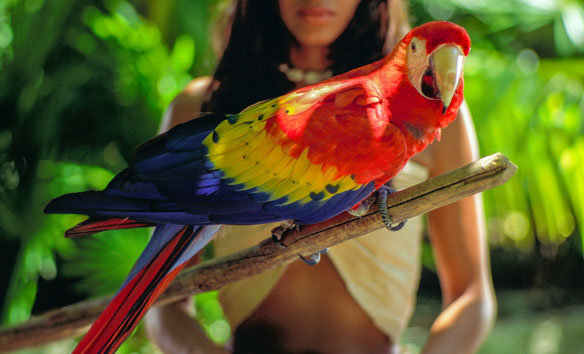 Carlos Joaquin would like to see those vacationing in Caribbean Sea-fronting Cancun and Playa del Carmen step inland for part of their holiday.

Joaquin, governor of the state of Quintana Roo, home to Mexico’s most popular beach destinations, says his jurisdiction has a host of other tourism attributes in addition to its famed sandy shores.

Joaquin labels those beaches “amazing,” but he also points to the likes of jungle home to exotic wildlife; cenotes, the underground water bodies found throughout the Yucatan Peninsula, some of which have been turned into tourist attractions and can be explored by scuba divers and snorkellers; and the Maya influence, a reminder of an ancient civilization, which left a legacy that remains very visible in today’s Quintana Roo.

“The history of Quintana Roo is the Maya Zone,” Joaquin says of a corridor running from the seaside Mayan ruins of Tulum – found on a bluff overlooking the Caribbean – to coastal Chetumal, a city slightly north of Mexico’s border with Belize.

The corridor is home to numerous archeological sites, and Joaquin notes that Quintana Roo continues to have many people who speak Mayan dialects and Indigenous women who wear Mayan clothes.

Cancun has seen scattered violence linked to the drug trade in recent years, which has generated international attention. Tourism authorities answer that that violence occurred in parts of the city that tourists don’t frequent, and no tourist has been harmed by it.

Joaquin says his administration takes tourist safety seriously, with 400 security cameras having been installed throughout Cancun and 1,600 more planned.

As well, a military police battalion is now based on the nearby island of Cozumel and can respond to any trouble anywhere in Quintana Roo.

“You can visit Cancun safely,” says Joaquin. “The reality is it’s more about perception [when it comes to concerns about security].”

Joaquin says Quintana Roo state police are increasing their cooperation with their federal counterparts and Mexico’s military. He adds his administration is strengthening the state police.

“We have so many areas people don’t even know we have,” Joaquin says.

Popular coastal resorts increasingly have hotels that are for adults alone, while others welcome children. The adults-alone options in Cancun are seen by some as a sign that Cancun has shed its spring break reputation.

Scuba diving is another area Quintana Roo has made inroads in, including Joaquin’s home island of Cozumel, known for its dive operators and coral reefs and other marine life found off of its shores.