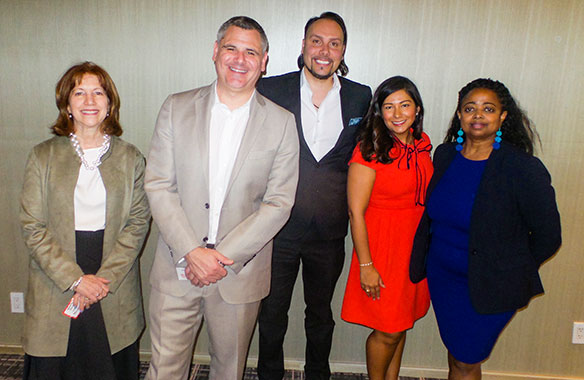 Philadelphia’s hotel scene is on the verge of reaching new heights.

A Four Seasons will be opening in the city in mid-August, occupying the 48th to 60th levels of a 60-floor building.

Jeff Guaracino president of Visit Philadelphia, told a Wednesday Toronto gathering that hotel guests will have the “most gorgeous views of the city,” adding those guests will head to their floors in a “totally glass elevator.”

Hotel spokeswoman Melissa Quinones in turn promised the hotel will have “incredible chefs”who will be offering new dishes, and visitors will also find a “sky-high bar” on top of the hotel.

The impending hotel is also being welcomed by Visit Philadelphia spokeswoman Donna Schorr: “We’re very excited because it’s going to bring true luxury to the city of Philadelphia.”

Meanwhile, Guaracino among things praised Philadelphia for being a great sports town, and said the cost of a Philadelphia visit is likely to be lower than one in such East Coast US cities as New York and Boston.

He also said his city is proud of its diversity and visitors “will find a place that warmly welcomes you.”

Visitors can also enjoy festivals and live concerts, he continued.

Meanwhile, Guaracino praised Philadelphia as a walkable city, drawing comparisons between his city and Montreal in that regard.