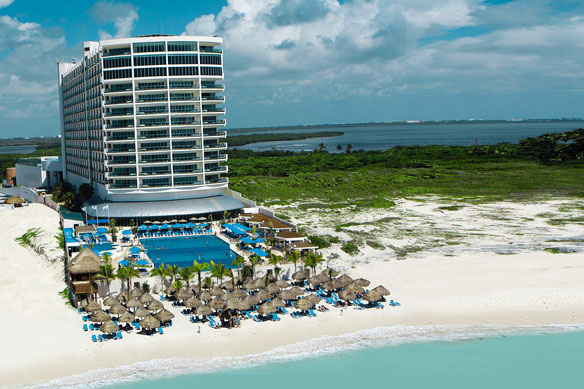 The Seadust Cancun resort
is one Cancun option.

Israel Urbina says the district will be seeing steady hotel openings as developers look for new area sites as the hugely popular hotel zone in Cancun has been running out of space for some time.

Indeed, Playa Mujeres is expected to see some 15,000 more hotel rooms in the next five years, he notes.

“Playa Mujeres is going to be a huge destination,” Urbina states.

Urbina says Playa Mujeres – found just north of Cancun – has the same type of beaches that have long wowed those visiting Cancun, and visitors will find a wave-free destination that Urbina compares to a pool.

Among upcoming hotel additions to the Cancun-area scene will be a Planet Hollywood, which will begin welcoming guests either late this year or in 2020. The celebrity-affiliated brand will “be interesting for us,” Urbina says.

Spring saw the opening of the Atelier Playa Mujeres, an all-inclusive which now has 430 rooms.

Cancun has seen the major brand hotel names establish a presence there, and there are other hotels that visitors shouldn’t expect to find outside of Mexico. For instance, Senor Frog’s, best known for building up a network of clubs both within and outside of Mexico, has the Senor Frog’s Hotel & Hostel, with guests able to choose between private and shared rooms. Senor Frog’s clubs have always been known for their lively atmosphere, and the Cancun hostel/hotel is in Cancun’s hotel zone and promotes itself as a “fun-inclusive” retreat that has the same “classic high energy” found in Senor Frog’s clubs.

Urbina says those visiting the Cancun area will be able to choose from modest accommodations to high-end luxury stays.

The destination sees large numbers of families and couples, and the groups market is growing fast, with Cancun having largely shed its reputation as a spring-breakers haven, although some hotels continue to welcome them.

Urbina says area beaches continue to be a huge draw, but the three communities association hotels are found in have moved well beyond being just beach retreats, adding visitors will find an array of cultural and natural attractions there as well.

More information on the association can be found at resortscancun.com.