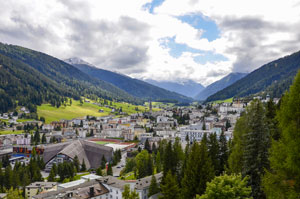 Although Switzerland is in the middle of a period of steady growth in tourism from overseas markets – including Canada – the European country is consciously not appealing to the masses.
“In Europe, there’s a new buzzword – overtourism – this is a hot topic here,” Jürg Schmid, the CEO of Switzerland Tourism said at the recent Switzerland Travel Mart held in Davos, Switzerland. “It’s a serious challenge and, if you don’t feel comfortable any more to live in your own city, if people start to leave the city, at the end of the day, you start to leave tourism because tourism needs the population and interaction with the [local] people.”
Positioned as an alternative to overtourism, the destination is highlighting authentic experiences that await travellers, from scenic hikes to active adventures, as part of an ongoing campaign called “Nature wants you back.”
“This shift from group travel – we call is mass tourism – to individual travel is one of the most amazing and fundamental shifts we see… Switzerland is a small country. We’re not prepared for masses. We will definitely not prepare for overtourism, we don’t want to be. This is why we decided we won’t promote group travel anymore in Switzerland,” he said, noting they are targeting small to mid-size groups, as well as individual travellers. “We are a quality destination, we want to be, and this is what all our efforts go in to, and we believe this is what Switzerland is.”
Citing an ongoing trend for travellers seeking authentic and experiential experiences while in Switzerland, not to mention a significant portion of inbound overseas bookings coming from the trade, he said travel agents and tour operators are as important as ever.
“In Switzerland, roughly one-third of the hotel overnights [are] generated through the indirect channel, through tour operators, through the travel trade sectors, so this shows and demonstrates very clearly it’s an important viable part of Switzerland’s business,” he said.

The main event
This year’s Switzerland Travel Mart (STM), the most important trade show for Switzerland’s travel and tourism products, had a record attendance welcoming 480 representatives from 50 countries – including first-time delegations from Albania, Costa Rica, Iran, and Mongolia.
Schmid said the biannual event provides operators and buyers from around the world the chance to meet and connect with 350 Swiss destination and hotel suppliers.
“Those 480 buyers, they are very important business partners, they are really the top companies in the world’s travel sector,” he said. “On a worldwide basis, they represent an annual revenue of $25 billion dollars. For Switzerland, they represent roughly a billion dollars of yearly income and revenue to our tourism sector.”
Alex Herrmann, director North America for Switzerland Tourism, told Canadian Travel Press the show can get into first talks for future business agreements.
“The goal is to bring these people together and provide a platform for tour operators to learn more about Switzerland, about new products in Switzerland, and the destinations,” he said.
“You really have the Swiss partners listed up and the international tour operators, the buyers that visit them and package their products, and enhance their offering and learn as much as they can of possible new trips and tours through Switzerland,” added Schmid.

Oh, Canada
During a pre-tour gathering for the North American trade delegation held in Basel, Switzerland, it was announced that Pascal Prinz, the previous trade manager east coast for Switzerland Tourism in New York, will be taking over for Evelyn Lafone as the new market manager Canada. 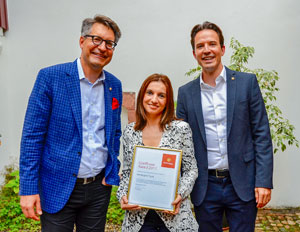 Prinz, who takes on the new gig as of Nov. 1 as Lafone settles into a new post with Switzerland Tourism in Stuttgart, Germany, was also on hand to announce the winners of this year’s Gold Flower awards, which recognize top tour operators featuring tours to Switzerland within the North American market.
“The awards are basically a recognition of outstanding achievement from tour operators that we hand out every two years,” he said.
Along with Alpine Adventures and Europe Express of the USA, Canada-based Kensington Tours was recognized as an important and innovative partner for Switzerland Tourism in Canada.
“It is an honour for Kensington Tours to be awarded such a prestigious award and of course a great feeling to be recognized among so many tour operators specialized in the destination,” said Dana Toma, senior product director at Kensington Tours. “It means we need to continue our efforts to promote the destination even more.”
Representatives from Switzerland Tourism also highlighted the launch of a new Switzerland Travel Academy, which allows members to become certified Switzerland travel experts.

Trade take-aways
As a product buyer, Toma said STM gave her an opportunity to network with various suppliers in the industry to better understand future opportunities for the luxury market.
“It’s important to always be aware about the new trends and products available on the market to better promote the destination,” she said. “In the last year, we’ve completely revamped our product and itineraries, and we will continue to do so in the next few months. Our effort was rewarded with a huge increase in sales.”
In attendance for the first time, Molly Danner, program director for National Geographic Expeditions, said Switzerland has been a really popular destination for the tour operator.
“I came because I think it’s important to keep the connections with tourism boards, I found that they really support us,” she said. “People think Switzerland is beautiful and feel safe travelling there, so it was important to keep the connections with the destination, learn as much as I can, and hopefully improve the experience for our guests.”

By the numbers
According to the latest figures, Switzerland is booming for North American travellers. Compared to 2016, the first seven months of the year saw a 6.8% increase in Canadian overnights and in July alone, a significant 16.3% increase was recorded over the previous year. 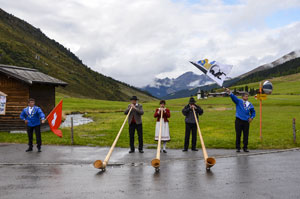 Entertainment during the closing party for STM 17.

“The overseas markets are by far the fastest-growing markets when it comes to tourism to Switzerland,” said Schmid. “We have this year tremendous growth from, I would say, all of the overseas markets, seven years in a row the US market is growing at a speed of 4% to 8%, so the US market is really booming to Switzerland… We had a nice increase from Canada as well.”
Over the past five years, Herrmann said the combined arrivals from Canada and the US have grown by 30%.
Overall, tourism in Switzerland has blossomed to 92 million overnights and 60 million international arrivals.
“We’re only eight million people living here,” said Schmid. “Eight million people with 60 million guests shows to you that we’re a tourism nation.” Talking travel and trends in Switzerland with Jürg Schmid,
the CEO of Switzerland Tourism:
Groups from overseas markets are getting smaller. “We see a big change from mass group travel to more individual to smaller and mid-size groups. They still travel in groups, but it’s more eight to 15 people than the 55 packed coaches that travel through the country.”
It’s all about the experience. Schmid says many travellers are moving away from a European vacation that combines 10 countries in eight days, and opting for more in-depth trips centred around two to three countries. “We see that trend already outlined from sight-seeing tourism to experiences, people want to discover more individually, want to have an experience, want to see a country, its people, its culture, its nature, its gastronomy, and not just rush through a country,” he says.
River cruises are big for North Americans. “One of the biggest trends we see from the US and Canada is the river cruise… In Basel, this is where the Rhine is big enough to have the ships, so many of the North American travellers that do the river cruise, they then add on some individual trips to Switzerland.”