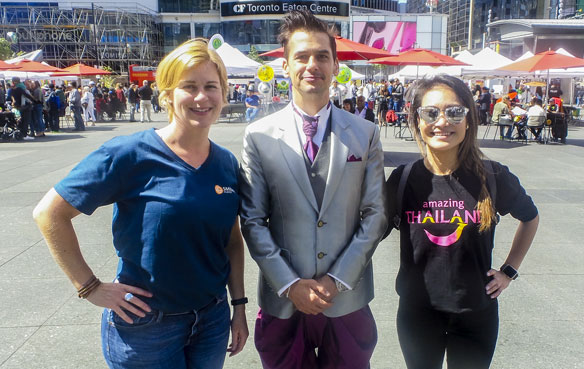 Tourism authorities promoting the “Land of Smiles” believe they have every reason to be smiling about Thailand’s tourism prospects in this country.
Thailand hosted more than 200,000 Canadians last year, and authorities note that the Tourism Authority of Thailand is preparing to open its first actual Canadian office this fall that will be staffed by several people. The tourism authority has long had Canadian representation, but current representative Kayla Shubert works from home, as did her predecessor. Shubert is currently the tourism authority’s only full-time Canadian staffer.
Thailand will be bucking a trend at a time when many tourist boards closed Canadian offices.
Tida Harnpanpongse (pictured above right, with Sue Fraser-Kuipers (l) and Daniel Fraser of Smiling Albino) of the tourism authority’s New York office says the upcoming Toronto office will be a clear plus, serving as a “gateway” to Thailand.
“It’s really going to open the door for more promotions and marketing,” she told Travel Courier during Saturday’s Destination Thailand festival in downtown Toronto.
“The fact we’re opening it shows we see the potential [for growth in the Canadian market].”
The festival was hosted by Daniel Fraser, a Calgarian who’s lived in Bangkok for 17 years, runs Bangkok-based Southeast Asia tour operator Smiling Albino, and is also a TV host in Thailand.
“Most Canadians don’t know much about Thailand,” he said, attributing the limited knowledge to what he says has been limited tourism authority marketing in Canada in the past.
His long involvement in Thailand’s tourist trade leads him to believe most tourists tend to visit a handful of Thai locations while vacationing in the country, bypassing the likes of small villages that he says they would likely find fascinating. Fraser adds that the “99% of the real Thailand hasn’t been explored” by foreign tourists.
Meanwhile, Thai Airways International, which had largely withdrawn from the North American market, is rebuilding a presence on this side of the Pacific, including the opening of a Toronto office last fall. The airline has hired airline industry veteran Jon Murray as a Toronto-based business development manager, and Murray says the carrier’s long-term goal is to restart North American service. Thai Airways International now has aircraft in its fleet that can reach this continent.
Murray labelled Thailand an “easy destination” for travel agents to sell as it’s a “bucket-list” destination for many Canadians.
www.smilingalbino.com
www.na.tourismthailand.org