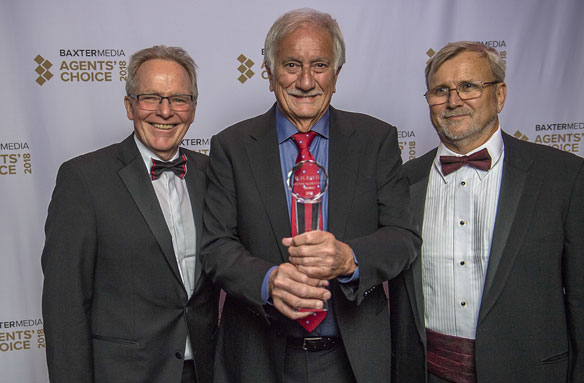 Bruce Hodge, who founded Toronto-based Goway Travel nearly 50 years ago, received the W.H.Baxter Lifetime Achievement Award at the Agents’ Choice Gala, an award that paid tribute to a man who has been shaping travel in this country for nearly half a century.
Hodge, who announced earlier this year that he’s begun preparing his company for his eventual retirement, initially worked in banking, but made the transition to tourism. “I just want to tell you I’m a very fortunate person. I’m very grateful I chose the travel industry for a career,” said Hodge, who declared himself “humbled” to have won the award. “It’s an awesome business to be in.”
Hodge’s tourism career began in Europe. He launched Goway after relocating to Toronto, and for a long time, many associated it with Hodge’s native Australia and other South Pacific locales.
But Goway has greatly broadened its program over the years, demonstrated by Agents’ Choice 2018 voting, with the company named Best Tour Operator to both Africa and Asia Pacific.
Hodge also used the event to praise his wife, travel agents and the Goway staff, several of whom were on hand to witness him receiving the award. Among those Goway employees was Aubrey Schmidt, who was “delighted” to see Hodge recognized for his contributions to the travel industry.
Hodge added that he’s made “awesome friends” thanks to his long tenure in travel. Hodge’s contribution to the industry was later applauded by Baxter Media president David McClung. “He is a pioneer in the industry, innovative and very committed to the travel agent community,” McClung said.
It was noted during the tribute Hodge himself has been an indefatigable traveller over the decades, undertaking such challenges as climbing Tanzania’s Mount Kilimanjaro, the highest point in Africa; seeking mountain gorillas in East Africa; and running the Athens Marathon.