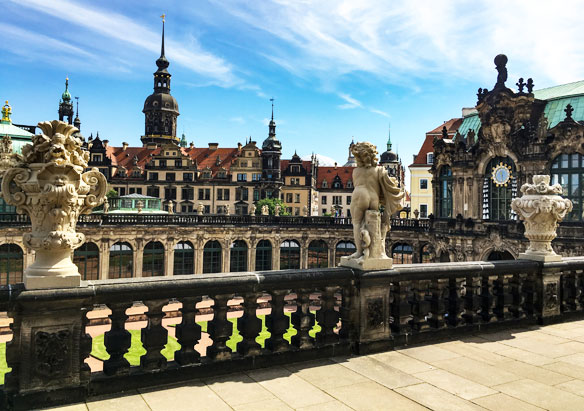 Standing on the cobblestoned streets of Dresden, it’s easy to see why the massive dome of the Frauenkirche is one of the city’s most famous landmarks, even though it went 60 years without being part of its iconic skyline.
Destroyed most recently when the gutted ruins of the church collapsed following bombings in the Second World War, the reconstructed Frauenkirche (Church of Our Lady) is intricately linked to the reunification of Germany, and is now recognized as a symbol of unity and peace.
Through donations from 600,000 people from around the world, including citizens of Poland, Austria, Switzerland, France, and Czech Republic, the baroque-style church reopened in 2005 and has since received millions of visitors. 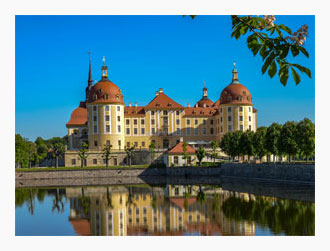 For Reverend Sebastian Feydt, it’s a prime example of civic engagement, and “what’s possible when citizens take matters in their own hands.” Since the reconstruction incorporated original blackened stones into the design, he believes it also serves as a tribute to the past.
“The old dark stones on the outside keep memories alive and the new light stones build a bridge to the future,” he says.
The city itself is a blend of old and new, as the capital of the eastern German state of Saxony experienced remarkable growth and renaissance since the fall of the Berlin Wall. While other historic buildings such as the Zwinger Palace and Semper Opera House were previously rebuilt to match their former glory after the war, other sections paved the way for complexes built in the Socialist Modern style. Today, the city, which is located along the River Elbe near the Czech Republic border, is a cultural hub, and hopes to earn the title of European Capital of Culture 2025.
With 4.43 million overnight stays, Dresden currently ranks among the top city travel destinations in Germany, and one of the magical cities of Germany.
“It is today a city that simply has to be seen on a trip to Germany,” says Dirk Hilbert, the mayor of Dresden. “A city which reflects German history in a fascinating way.”

Things to experience in and around Dresden

Located 18 km from Dresden, Bastei (pictured on the cover) is a top draw of the Elbe Sandstone Mountains and a must for photographers. Featuring panoramic views of Saxon Switzerland, the area rose to popularity during the Romantic period, with artists such as Caspar David Friedrich depicting the rock formations in his work.
Another draw for photographers is the Königstein Fortress, one of the largest hilltop fortresses of Europe, situated 247 metres above the river Elbe. Along with culture, nature, and history, tours of the fortification include a 1.7 km panoramic walk along the fortress wall, with scenic views of Saxon Switzerland National Park and Bohemian Switzerland National Park. The unconquerable fort was considered to be the safest place in Saxony. 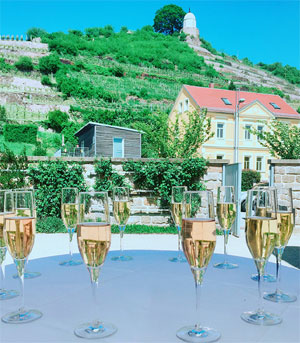 Meanwhile, wine lovers can enjoy a distinctive 850-year-old winemaking tradition throughout the region. Visitors to the Schloss Wackerbarth winery can learn about the fermentation process and discover why bottles of wine in Saxony’s oldest sekt (sparkling wine) cellar are gently rocked and never shaken, in accordance with French tradition. For groups of 15 or more, individual guided tours can be booked, ranging from a vineyard hike to a sparkling wine tour. Another winery to discover is Hoflössnitz, the first wine estate in Saxony to be certified as organic.
Those interested in architecture will enjoy the contrast between the Altstadt (Old Town) and the Neustadt (New Town). A popular example of baroque architecture, Dresden’s Zwinger Palace was built in 1709 during the reign of Augustus the Strong.
Another popular draw is the world-famous Semper Opera House, whose orchestra, the Dresden State Orchestra under chief conductor Christian Thielemann, is internationally renowned.
For an example of a repurposed industrial site, head to Kraftwerk Mitte, which is described as Dresden’s new arts centre and creative hub. The old power plant has theatres, a music school, nightclub and a café. For those looking for a night on the town, head to Neustadt for lively bars and a thriving club scene.
To see the city from a different perspective, clients can take a ride on the world’s oldest and largest paddle steamer fleet, while taking in attractions like Pillnitz castle during a ride on the Elbe. Another recommendation is the picturesque Moritzburg Palace, the former hunting lodge and summer residence of Augustus the Strong, which is set on an island at the centre of a lake. Located on the outskirts of Dresden, the castle has many unique features like a collection of 71 red deer antlers, which of all places are housed in the dining room.