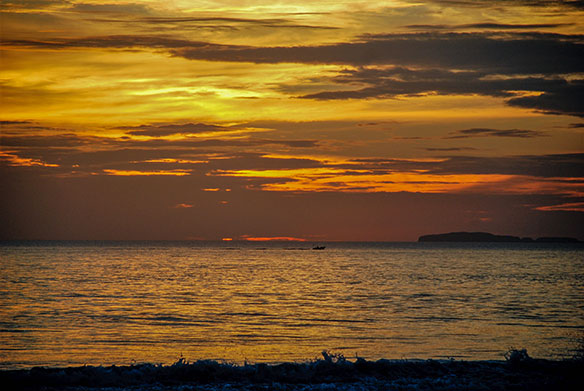 (Photo above: Watching the sunset from Riviera Nayarit beaches is always dramatic.)

The aircraft that transports visitors may land at the PVR airport, but Riviera Nayarit tourism officials draw a clear distinction between it and the city of Puerto Vallarta.
Like so much of Mexico where Canadian tourists congregate during winter, the beaches that lie along Riviera Nayarit’s more than 100 kilometres of Pacific coastline will always be a prime attraction. But there is something more unique about the multiple destination options in this fascinating area.
Upon return from my recent tour of the region, I began to try and encapsulate the area into a singular conceptual framework to which travel agents could relate. The more I tried, the more I realized that as I travelled through the communities that straddle the beach areas of the Pacific Ocean and Banderas Bay, a number of distinct personalities emerged from town to town, making it much more of an interesting destination to visit. 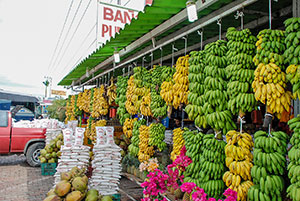 One of the stops on the road along the Riviera Nayarit

Sayulita Beach
Some of the best casual restaurants of the area are situated on the shore along Sayulita Beach. Here, diners watch the surfers and paddle boarders, as they catch waves that carry them several hundred metres towards the shore, greeting the sunbathers who, if not watching them, are enjoying the beauty of the hillsides that encase the beach.
Once known as a bit of a hippie haven, that easy-going personality still exists in Sayulita. But its popularity has shifted it from an inexpensive haven to a high demand growth region. Today, it is filled with the kind of people who are looking for somewhat more upscale accommodation, but are totally comfortable with intermingling with what might be termed “the old guard.”

Punta de Mita
Further down the coast in Punta de Mita, any pretenses of quaintness would be harder to find. It is fast becoming the centre for an increasing number of luxury condos, high-end boutique hotels, and a growing collection of shops and art galleries.
Here too, however, surfing and snorkelling are bringing more and more water babies to revel in those experiences.
While dotted all along the coast, many of the major all-inclusive brands can easily be found in the area starting in Nuevo Vallarta and going up to and beyond Bucerias.
One of my most enjoyable days was on the whale-watching tour with Punta Mita Expeditions. I had controlled expectations going in, as I did not want to be disappointed if we did not spot any, or only saw them at a great distance.

Banderas Bay
As it turned out, I need not have worried. It was a dynamic four-hour experience, as these beautiful creatures, who travel annually from Alaska to the warm waters of Banderas Bay, put on a series of lengthy shows. After cavorting with each other for a period of time, they let us know they’d had enough with a wave of their tails and a splash, as they dove below the surface.
Tourists will often inquire about different things to do on their vacations. Try this option. Few people have the opportunity to go on a holiday and attend polo matches, of the horse and rider variety, that is. Not only can you do that in the town of San Francisco, but this past December it held an international competitive polo event which attracted some of the best players in the world.

San Blas
For those who revel in spying on the smaller living creatures of our universe, a must stop is at the small town of San Blas. Dedicated bird- watchers will already know that close to San Blas is one of the best birding areas in the world. But for the rest of us who choose the tour along the mangroves by boat, the reward comes in spotting some of the over two hundred species of migratory birds which move from north to south and back again with the changes of the seasons.
From the small walk-up accommodations of San Blas, to the sprawling spaciousness of the Grand Serenis Matlali Hills Resort, to the luxury of the recently opened W property near Punta de Mita, there are quality accommodations to suit everyone’s style and price ranges. And, when it comes to food, this is a region that satisfies.
At more than one restaurant, I sampled some of the best Ceviche dishes I have ever tasted. For seafood dishes with a Mexican flair, you won’t find better. And even the one steak I had
was terrific.
For more information on the ins and outs of this truly excellent area, go to www.rivieranayarit.com .
Ron Pradinuk is the host of Canadian Travel Press’ Voices of Travel podcast feature. He is a veteran of the Canadian retail travel industry, and over the course of his career, he has been a pioneer in finding new ways to sell travel. He has served as president of ACTA National. And he also writes a regular travel column for the Winnipeg Free Press. 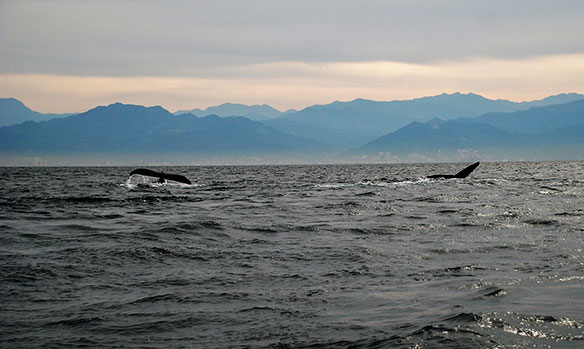