Sailing Away With The Moorings 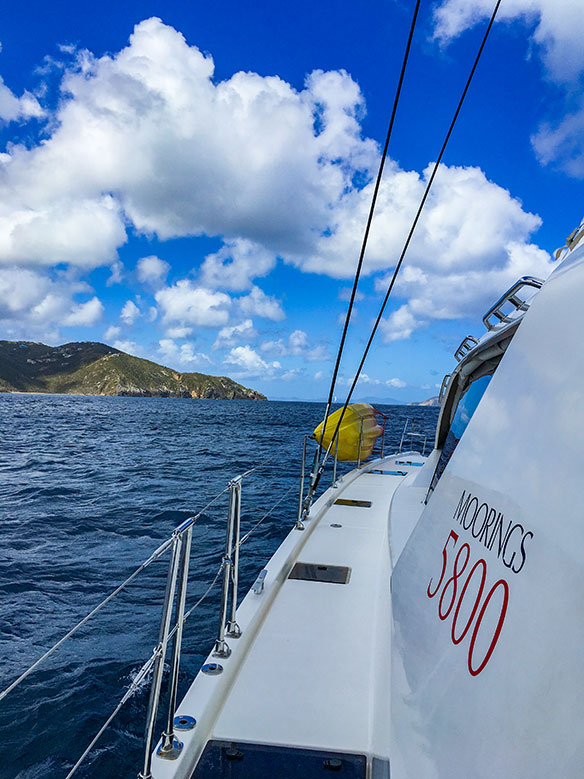 “There are two sides to the British Virgin Islands,” our captain Martin Street says after we’ve settled aboard The Moorings 5800 Legacy Edition catamaran at sunset, explaining that the archipelago is known on one hand for its idyllic scenery, secluded coves and snorkelling spots, and on the other a beach-side party scene. “What do you want to see?”
As first-timers do we need to explore some of the most unique attractions of the Caribbean destination like its swimmable caves and the granite boulders at The Baths? Absolutely.
Is soaking up the sun a must after months of enduring the long Canadian winter? No question.
Do we need to try a Painkiller, the drink concocted in this very location? I think yes, maybe even twice in the name of research.
So, like a choose your own adventure novel, we opt to experience both.

Going back to the start

It’s fitting that our journey starts in Tortola, as it’s the spot Navy veteran and sailing enthusiast Charlie Cary launched the premier yacht charter company nearly 50 years ago. What started with a fleet of six has grown into a worldwide venture with 400 boats across more than 20 destinations in the Caribbean, the Mediterranean, the South Pacific and beyond.
“We were established in 1969 by the Carys,” says Ian Pedersen, marketing manager, North America for The Moorings. “They saw an opportunity for the yacht charter industry and started with six boats at the same location that the marina is currently located in Tortola back in 1969. It was the fourth of July actually. We will be celebrating our 50th anniversary next year, so there are big plans for that.”
Over the past (almost) half a century, The Moorings’ offering has expanded from solely self-skippered monohulls to include sail and power catamarans and all-inclusive packages complete with a captain and chef, like ours.
“There’s a boat for every budget, there’s a different type of charter vacation for anything that you want from sailing on your own for someone that loves to go sailing, we have a boat for them,” he says. “We have 58-foot, crewed all-inclusive yachts for a large group that wants something more luxurious and everything in between, so you can just hire the skipper or you can just hire a cook, if you want to captain the boat yourself.”
With commission rates starting at 5% and increasing based on the number of bookings made per year, he says The Moorings is an option for clients who are looking to try something new and have a fully immersive vacation experience or for those looking for an alternative to a classic all-inclusive vacation or a cruise.
“It’s for people willing to take that jump and try something different. It’s definitely a unique experience,” he says. “It’s a totally different way of prioritizing what you think is important. It’s a totally unique type of vacation that may change the way you think of any other vacation.”

Although the BVI is one of the territories still rebounding from the impact of last year’s hurricanes, the destination has reopened for business, especially for charter vacations.
“There’s really a push to get things back to business,” he says. “People just want to start looking forward, but in order to do that we need people to come back and take that leap of faith with the islands and just go back on vacation because tourism is a huge part of the industry down there.” 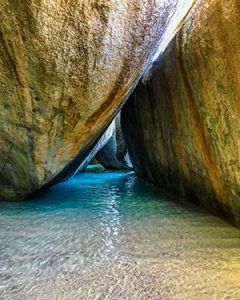 By the next morning, as we awake to breakfast overlooking a secluded stretch of white-sand beach in a bay of turquoise water on Guana Island, our course has already been charted.
As promised, the next few days are filled with snorkelling the caves of Norman Island, taking in The Baths on Virgin Gorda, enjoying countless secluded white-sand beaches, lounging on yellow floats attached to the catamaran, and daily excursions to the shore.
It’s on Jost Van Dyke, which pre-Irma had some 36 bars to 120 residents, where we truly feel the vibrant signs of recovery. Although there is still work to be done, restaurants and bars are open and welcoming guests.
Here, we head to White Bay to finally try the famous drink invented on this island in the 1970s.
According to our bartender at the Soggy Dollar, aptly named because visitors have to get wet as they wade from their boats to the shallow shore, a Painkiller is made with “pineapple, orange, coconut, nutmeg, and lots of rum!”
It’s safe to say there’s something special about this island, as it’s also what drew our captain in after many years of sailing around the world.
“I’ve been here seven years now,” says Street. “I sailed into Jost, and I thought this is pretty nice.”
www.moorings.com/

SETTING SAIL WITH THE MOORINGS

THE DIGS: Our yacht had a split-level floor plan with two cabins opening to a forward cockpit and four rooms below, all with private ensuite baths. There were lots of places to hang out like an upper deck with 360-degree views, and indoor and outdoor dining options. The boat was also outfitted with everything one needs for fun in the water from stand-up paddleboards and a kayak to
snorkelling gear.

TAILOR MADE: The Moorings caters to a group’s drink and food preferences, as well as their interested activities while on board. Our chef seamlessly brought out meals for a variety of dietary restrictions and food preferences, including a vegan. We enjoyed three meals a day with nightly sunset cocktails and canapés before dinner. Dishes, made from scratch, ranged from teriyaki salmon fillets with orzo salad to homemade coconut pancakes and chocolate chip muffins to lamb gyros.

BOOKING WINDOW: Trips should be booked at least four to six months in advance. For the American market, the typical trip length is between five and seven days.

RECOMMEND THIS: For clients looking for a one-of-a-kind holiday and to try something a little different.

SOMETHING NEW: “Any boat that you take with The Moorings are guaranteed to be five years old or less,” says Pedersen. “We’re constantly coming out with new product to replenish the boats that are phased out after five years, so we’re really just trying to keep up that level of quality.”

With over 50 picturesque islands filled with pristine beach coves and ample opportunities for snorkelling and diving, it’s no wonder why the BVI is a popular choice for travellers and sailors alike.
“USVI doesn’t have the line of sight sailing like we do,” says Street, adding that the businesses are all mom and pop shops. “Here everything is line of sight so you can easily island hop. It’s protected so the water is calmer.” 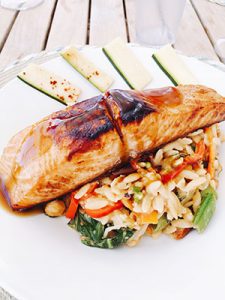 EAT THIS: Try the lobster on Anegada. “The way they prepare it there is unlike nowhere else on earth,” says Pedersen. “There’s a specific type of wood that grows on the island that they use to grill it that gives it a unique flavour. You can only ever taste that on that island.”

THE BEST SNORKELLING SPOTS: “There are The Baths on Virgin Gorda, that’s really cool to actually snorkel, not just climbing through the rocks, but to actually go and snorkel on the outside,” he says. “Then there’s the Indians, which is a really cool rock formation just in the middle of the water, which makes it pretty unique. And the Caves, on the island itself, which is right next to The Indians, you can go back and forth all day, snorkelling to your heart’s content.”

BE SURE TO: Hike to the top of the hill on Norman Island by Pirates Bight for 360-degree views of a stunning turquoise bay on the windward side and a panoramic view of the many ships in the area on the leeward side. Norman Island is said to be the inspiration for Robert Louis Stevenson’s Treasure Island.

THE PEOPLE: “No two trips down there are ever the same, you can visit completely different spots every single time and not get bored,” he says. “I think the main thing that always stands out to me – and what everyone always says – it’s the people there that make the difference. Going back and seeing what really becomes old friends, they recognize you from last time you went, and you talk about all the old stories and the times you had with the locals down there.” 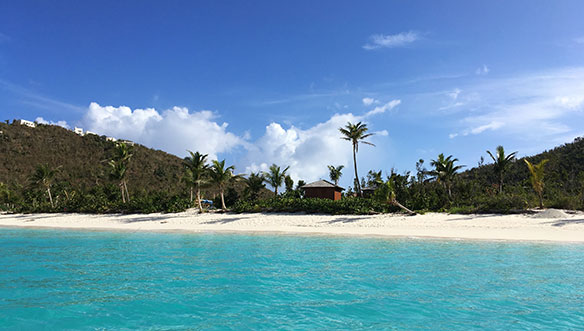