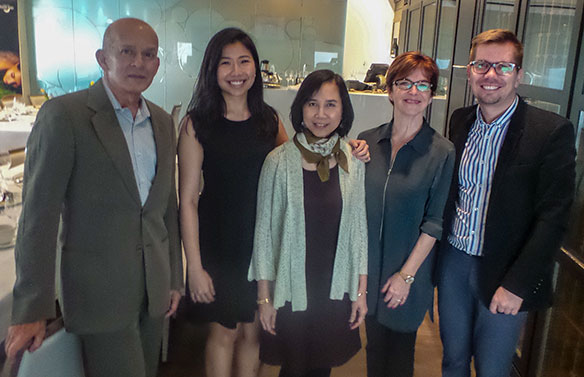 There’s always something new under the sun when that celestial body is shining over tourists exploring Thailand, famed in part because of its tropical beaches, but offering numerous other tourist experiences as well.
Kayla Shubert, marketing manager for the Tourism Authority of Thailand’s newly opened Canadian office, told a May 24 Toronto gathering that Thailand is “very, very diverse. It’s a small country, but every region is distinctly different. You’re always guaranteed to discover something new.”
The tourism authority has adopted the promotional slogan of Open to the New Shades, which touts the diversity found in the country’s tourism trade.
Shubert praised Bangkok as a cosmopolitan city that has “iconic sites,” such as the dramatic Grand Palace.
Those visiting Bangkok will also find numerous shopping opportunities and can tour the city’s famed night markets, she said.
The northern city of Chiang Mai, in turn, is home to what Shubert labelled “beautiful temples,” and visitors will find “incredible handicrafts.”
Shubert said Chiang Mai also has an “array of wonderful markets,” and the Chiang Mai area is also home to elephant camps where visitors can see the pachyderms up close.
Among other parts of the country Shubert said are deserving of tourist interest is the north’s Chiang Rai, once known for opium production, but which now has locals growing tea and rice. A museum tells of the history of opium, she said.
Sukhothai was the first capital of Siam and has UNESCO World Heritage Site status, and is the “cradle of Thai civilization,” Shubert continued.
Northeastern Thailand’s Udon Than, in turn, has an excavation site in which artifacts dating back over 5,000 years have been found.
Other Thailand attributes cited by Shubert included the tropical country’s long coast, more than 200 golf courses, opportunities to learn to cook Thai dishes and practice yoga and meditation.
Shubert added that festivals and events can be found in the Asian nation “almost every day of the year.”
Meanwhile, Chris Mustachi told the gathering that 137 Pillars Suites & Residences Bangkok provides accommodations in a lively part of Bangkok.
137 Pillars also has a Chiang Mai property that’s the “ultimate in luxury,” he said, and plans to open a Phuket property as well.