Home › Digital Post › SeaWorld San Diego gets back to its roots

SeaWorld San Diego gets back to its roots 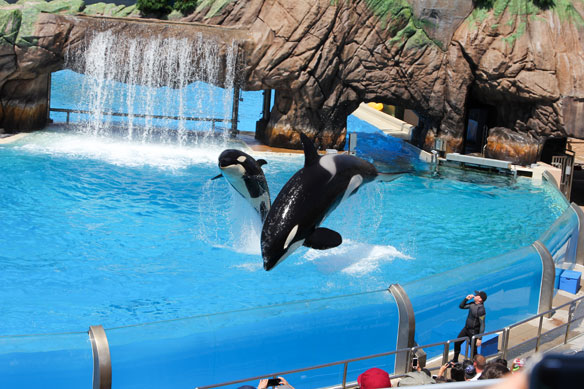 In a year in which it is celebrating its largest expansion ever, SeaWorld San Diego is also getting back to its roots – education and conservation – and adding a much more educational element to its shows and attractions.
“That’s how it all started. We want people to have fun, but also leave feeling inspired, feeling that they’ve learned something,” SeaWorld Parks & Entertainment’s Suzanne Pelisson Beasley told Travel Courier. “SeaWorld was founded on education.”
Key to this is SeaWorld San Diego’s all-new Orca Encounter, focusing on natural orca encounters, rather than the theatrical. The encounter showcases SeaWorld’s killer whales in a documentary-style format, supported by a three-storey, high-definition infinity screen with a natural, rugged coastline setting.
Using a combination of a live presentation layered with a digital environment, the new Orca Encounter allows SeaWorld to share its 50-year knowledge of killer whale behaviour and care. While the fun is still there, and yes patrons still get splashed, they also leave with more knowledge and fun facts about the majestic mammals.
“By combining a live orca presentation with an extraordinarily enhanced and augmented digital environment, we immerse our guests in the mysterious world of the killer whale, which most people would never get to experience,” said Brian Morrow, SeaWorld’s vice-president of theme park experience and design.
A specialized team of orca behaviourists, engineers, researchers and writers spent nearly a year creating the new Orca Encounter.
“Guests may see a natural breaching behaviour by the whales, and then on our new massive infinity screen they’ll see the same behaviour by a killer whale in the wild enabling them to draw an even deeper connection to the orcas,” says SeaWorld San Diego orca behaviourist Kristi Burtis. “Our visitors also hear how scientific research on killer whales at SeaWorld is benefiting wild populations.”
The nearly 140-foot-wide screen gives guests unique facts about the whales while showing off their intelligence and characteristics, from their pectoral flipper to tail flukes and more.
“The latest technology and educational techniques now allow us to also witness the amazing bond between humans and our orcas,” added Burtis. “It’s so important for as many people as possible to understand and appreciate orcas, which is key to the conservation of these extraordinary creatures in the wild.”
SeaWorld has also made a commitment to ending its killer whale breeding program, making the orcas in its care the last generation.
SeaWorld parks in Orlando and San Antonio will be adding the new Orca Encounter by 2019. 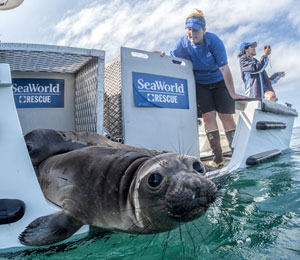 SeaWorld plays a vital role in wildlife rescue and rehabilitation.

Rescue and rehabilitation
For more than 50 years, SeaWorld Parks & Entertainment has played a vital role in the rescue and rehabilitation of injured and orphaned wildlife and recently hit a sobering milestone – surpassing 30,000 animal rescues.
SeaWorld San Diego has been an integral part of this and a global leader in marine animal care and welfare, education, conservation, research and rescue for more than five decades. As of July 11, SeaWorld San Diego rescues – just this year – included 124 California sea lions, nine harbor seals, 29 northern elephant seals, six fur seals, six whales and dolphins, two sea turtles and 480 birds.
The park’s Rescue Team also routinely comes to the aid of dolphins, whales and sea turtles. Most injuries are from human interaction (fishing lines, etc.) and shark bites. Rescues are cared for at SeaWorld and the vast majority are returned to the wild.
SeaWorld San Diego’s Animal Health and Rescue Centre has a full-time staff of three veterinarians and is equipped with state-of-the-art facilities, including a laboratory, examination room, critical care unit, surgical suite, which includes custom surgery table, X-ray, ultrasound, endoscopy and anesthesia equipment, and recovery areas, including pools and enclosures tailored to meet the specific needs of each rehabilitating animal.
“When it comes to aquatic medicine we’re literally a gold mine of information for the world to use,” noted veterinarian Todd Schmitt “and when people buy tickets to the park they’re helping support these efforts.”
Park guests can learn more about SeaWorld’s rescue program by visiting the Rescue Plaza, where video screens play footage of marine animals that were given a second chance at life.
SeaWorld has also partnered with the Hubbs-SeaWorld Research Institute, a non-profit research organization committed to conserving and renewing marine life to ensure a healthier planet. HSWRI provides innovative and objective scientific solutions to challenges facing ocean health in our rapidly changing world.
HSWRI’s research takes its scientists to ocean basins and coastlines in the US and around the world, but some of their most important work has been done at the SeaWorld parks.

Ocean Explorer
New to SeaWorld San Diego is Ocean Explorer, featuring multiple aquariums and five rides for children. These include Submarine Quest, an interactive submarine ride, and Tentacle Twirl where guests fly in chairs suspended from the tentacles of a giant jelly fish. Aqua Scout, a jump-around ride, OctaRock, a happy swing ride, and Sea Dragon Drop, a free-fall tower, round out the fun.
Guests can also get up close to giant Pacific octopuses, Japanese spider crabs and California moray eels in three uniquely designed aquariums. For those brave enough, interactive surprises like pop-up bubbles and crawl tubes inside the actual octopus and crab aquariums are a must.

Aquatica
For some fun in the sun – and water – there’s Aquatica combining high-speed thrills with the amenities of a beach-side resort and up-close animal encounters.
From serene to extreme, it’s all here. Experiences range from lounging on sandy beaches and splashing and playing in heated pools to journeying down high-speed water slides, all set in a South Seas-themed, resort-style environment.
A highlight of the waterpark is one of the largest wave pools in Southern California. Guests swim in more than 500,000 gallons of water with periodic swells of up to five feet. A white sandy beach (43,000 square feet) allows visitors to relax on lawn chairs or luxuriate in nearby cabanas.
At Loggerhead Lane, guests can enjoy a winding 1,250-foot-long lazy river, as well as an up-close view of dozens of pink flamingos. 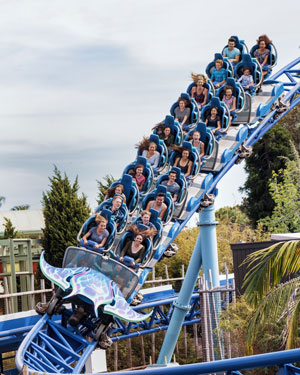 Manta coaster thrills riders with twists and turns and a 54-foot drop.

Other attractions
Manta features a 100,000-gallon, marine-life habitat with California bat rays that guests can touch and feed. Manta also includes a double-launch roller coaster with a 54-foot drop and twists and turns that make riders feel like they’re soaring and diving like a giant manta ray.
Otter Outlook features a display of California sea otters – listed as a threatened species by the U.S. Fish & Wildlife Service – taken in by SeaWorld through the Sea Otter Research and Conservation program at the Monterey Bay Aquarium. At specified times each day, keepers treat guests to an otter presentation during which they educate guests about the species and demonstrate enrichment activities for the otters.
A sure hit with patrons of all ages is the Penguin Encounter featuring nearly 400 penguins, representing six Antarctic and sub-Antarctic species (gentoo, Adélie, chinstrap, macaroni, king and emperor). Guests get a close-up look at these cute animals as they swim and waddle in the 25-degree, snow-filled habitat. SeaWorld San Diego has one of the world’s only successful emperor penguin breeding colonies outside the Antarctic, with 21 successful hatchings since 1980. 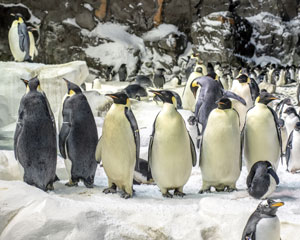 The Penguin Encounter is also home to nearly 90 puffins and murres, and to warm-weather Magellanic penguins, native to South America, who live in a habitat outside the Encounter.
Shark Encounter takes SeaWorld guests under water with sharks and tropical fish. The 280,000-gallon attraction features a 57-foot acrylic tube running the length of the sharks’ habitat. Sand, tiger, bonnethead, blacktip and whitetip reef sharks are among the species living in this popular attraction.
Turtle Reef features several rides and a 280,000-gallon, coral reef-themed aquarium with dozens of threatened loggerhead, hawksbill and green sea turtles, as well as thousands of tropical fish.
Other fun activities (advance registration required) include:
Dine With Orcas, a dining experience on a private poolside patio where guests get to meet trainers and see killer whales in a whole new light. Breakfast With Orcas Talso is offered on select days.
The Dolphin Encounter at Dolphin Point is ideal for those wanting a more personal experience with bottlenose dolphins without getting in the water. During this 10-minute, trainer-guided experience, guests get to touch, feed and help train bottlenose dolphins, while also learning about their natural history, conservation and training.
For an exclusive behind-the-scenes view of SeaWorld, Guided Tours gives guests the chance to learn fascinating facts about the animals that most people don’t know. Participants get up close and personal with bottlenose dolphins, or interact with other animals such as threatened or endangered sea turtles or penguins. Guests may even discover unique creatures in the park’s behind-the-scenes Aquarium Lab.
https://seaworldparks.com