A new era for Palladium 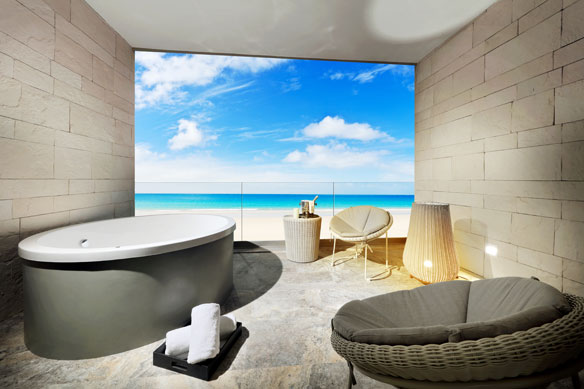 Being in a competitive industry vying for the vacation dollars of travellers with ever-changing wants and needs, Jacques De Paep, Palladium Hotel Group’s commercial director for North America, believes businesses can’t afford to stand still.
“You either innovate, expand, move ahead and renovate, or you die,” he tells Travel Courier. “That’s the way it is in our market because the cycle of a hotel is getting shorter and the experiences that the customer expects changes quicker than ever before – and that’s because we’re living in an information era, and people learn quicker than our parents did.”
With an ongoing $21-million investment to upgrades across its properties in the Dominican Republic, Jamaica and Mexico; the rebranding of its adults-only resorts from The Royal Suites by Palladium to TRS Hotels, and the upcoming opening of its most luxurious resorts to date, the company is certainly continuing to evolve.
“Palladium is actually moving ahead, very, very fast and very securely in its footsteps to be a luxury chain,” he says. “We are moving ahead to improve all our products.” 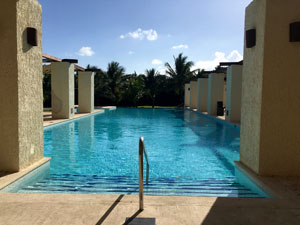 The pool at Zentropia Palladium Spa & Wellness in Riviera Maya

A new level of luxury
Along with recent upgrades and renovations at many of its properties, such as the Grand Palladium White Sand Resort & Spa in the Riviera Maya, the company is currently converting the Grand Palladium Riviera Resort & Spa into an extension of TRS Yucatan Hotel in Mexico.
“It’s an adults-only hotel with 454 rooms, totally new concept including private pools in front of the ground-level rooms, four restaurants including a cabaret dinner and a show restaurant all exclusive to TRS guests,” he says.
Once renovations are complete in late fall, 108 rooms in the adult-only property will feature swim-up pools, while all 454 rooms will have premium amenities and services. The property will also feature an adults-only beach club and a new infinity pool.
“We have super premium level offerings behind the bars at all TRS, combined with a higher number of staff in every resort, about 14% higher, and a rigorous program of training for all this new staff, so we can elevate our product and cross the line into the new Palladium,” he says, noting TRS Turquesa Hotel in Punta Cana is also undergoing changes. “All of that was basically pushed ahead by a young team at the helm of the group that said we need to move ahead, we need to create the trends, we need to be ahead of the expectation of the customer.”
Another innovative project will come to life with the opening of two resorts just north of Cancun in October 2018 with the launch of the family-oriented 750-room Grand Palladium Costa Mujeres and the 473-room adults-only TRS Coral, each with a balcony or furnished terrace.
“We try to anticipate the trends rather than follow the trends, and Palladium Hotel Group at the core has an extremely young team of executives and owners,” he says. “And these owners are enthusiastic, and they see the need to create the experience rather than follow behind, hence the revamping of the adults-only [hotels].”
Although they previously had an adults-only focus, De Paep said it was more a like a section at the hotel rather than stand-alone resorts, and the product will now also be elevated as today’s discerning travellers have higher expectations.
“Palladium Hotel Group, specifically the Grand Palladium hotels in the Americas and now the TRS, Yucatan, Coral and Turquesa, will make a huge difference in the offering of Palladium and make for a jump ahead of what Palladium was known for,” he says. “We are crossing the line into the new era of Palladium.”

What’s in it for agents?
According to De Paep, the trade plays a critical role for bookings at Palladium.
“For us, about over 75% of our reservations are still made by travel agents,” he says. “So, we recognize that the travel agent is not only the most important driver, we believe that the travel agent in our product is now more important than ever.”
In addition to fam trips and free night stays, the company has a travel agent loyalty reward program called Palladium Connect. Through pre-loaded credit cards, agents can collect their booking rewards in the form of money.
“That’s the way we think we should incentivize or thank the travel agents for the loyal Palladium bookings,” he says.
Keeping agents educated is important, which is why Palladium has eight BDMs in North America to meet with agents, run lunch and learn sessions, attend seminars and trade shows, as well as host webinars. There’s also Palladium University, available on Palladium Connect, through which agents are also rewarded.
“You can learn about our product and you earn points for that, or rather you earn dollars for that, so you actually get paid for learning about Palladium,” he says.
With its products being offered at different price points, for example TRS rooms come at a higher level than rooms at Grand Palladium hotels, he says the rewards are also on a gradual scale.
“In other words, the higher price the room that the agent sells, the agent will get a higher reward,” he says. “I think that’s important, you get more money for selling a higher priced product. So, the selling opportunity is there, of course, we sell a better product, a higher level product, not only that your reward is high.” 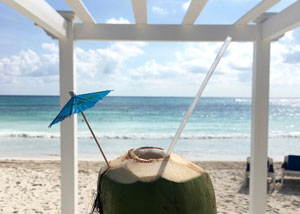 Tips on selling Palladium
When it comes to selling Grand Palladium hotels in Jamaica, Punta Cana, and Mexico to clients, one of the stand-out offerings at the family-friendly properties are kids programming for ages two to 17.
“Kids’ Clubs are open until 11 p.m., so I think that for the family enjoyment, if the parents want to enjoy part of their vacation, even a dinner by themselves, if they have two kids with them, the two kids can go to the kids’ club and they can pick them up after dinner, that’s all fine,” he says.
Because of recent updates, all properties now have improved services, rooms and amenities.
“The most important part of the vacation, of course, is the service, the quality of the food and the beverage, the entertainment, which is hugely important for us and is constantly being adapted,” he says.
For those with dietary restrictions, Palladium’s allergy card program will ensure guests with allergies/food intolerances receive meals that cater to their needs.
“At all our hotels, we are very conscious of the fact that people maybe allergic to certain food, so we have developed a food-allergy program where the guest can let us know beforehand or even at check-in, and we’ll develop a whole menu for the guests,” he says. “So, he doesn’t have to suffer, in theory, from eating salad all the time.”
As for the adults-only TRS, The Royal Suites, he says not only has the concept evolved into a luxury offering, part of what makes it special is the focus on the individual needs of the guest.
“There is a huge difference from what we were to where we are today,” he says. “Our idea is that you have to be able to dive into the experience of luxury and pampering yourself. We’ve done that with much improved furnishings, much improved architectural concepts and totally self-contained adults-only hotels, which have the privacy of no intrusions from anybody or anywhere, but with the added opportunity of trying all the facilities of the Grand Palladium hotels in amenities such as bars and restaurants.”
In terms of the Canadian market, De Paep says it’s extremely important for the Palladium Hotels & Resorts.
“So much so that in volume in the wintertime, when Canadians traditionally travel south, it rivals the US,” he says. “It’s very important for us and how is it performing? For 2018, things are looking up. Really looking up, so we’re happy there.”
www.palladiumhotelgroup.com 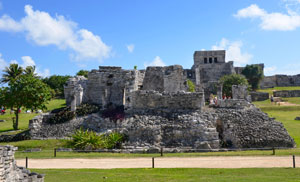 Off the resort experiences
From enjoying the services at the Zentropia Palladium Spa & Wellness or discovering the on-site secret pool, to taking part in a tequila tasting session or a range of activities for all ages, there’s plenty of options for clients to see, do and taste at the newly renovated Grand Palladium White Sand Resort & Spa in Riviera Maya, Mexico. However, its proximity to Tulum and nearby cenotes means there’s also lots to discover on day trips for those who want to experience some life off the resort. Here are just a few excursions: 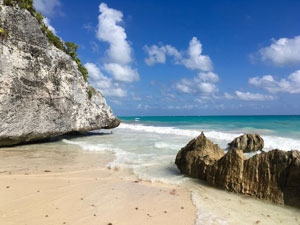