Selling the ever-changing magic of Disney 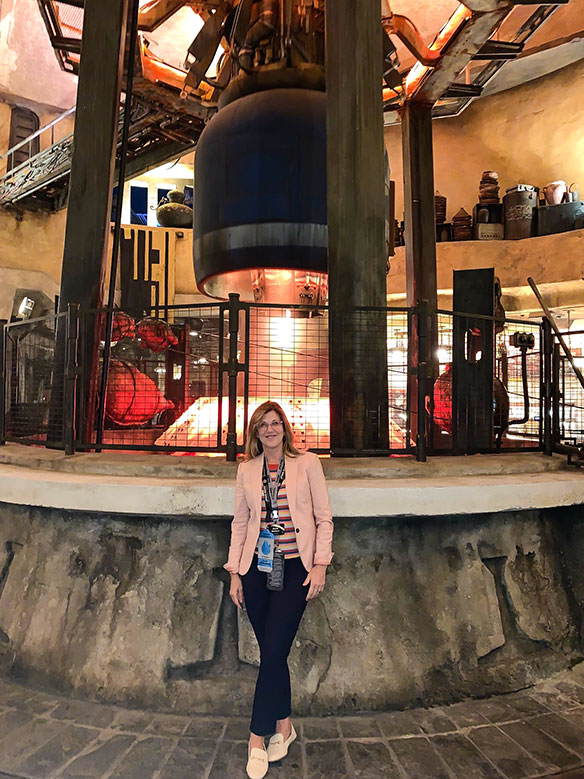 (Photo above: Marlie Morrison at Ronto Roasters, locatedin the Black Spire Outpost, during the opening of Star Wars: Galaxy’s Edge at Disneyland Resort.)

Leading Disney teams across Asia Pacific and Canada, Marlie Morrison says the factors that drive respective markets to travel to its theme parks vary like night and day.

“It’s so different, which is fascinating. I sometimes don’t think I’m in the travel industry,” Morrison, the managing director, marketing & sales, Canada & APAC, Parks & Resorts, tells Canadian Travel Press from The Walt Disney Company (Canada) Ltd. office in downtown Toronto. “I really do believe we’re in a consumer industry. We’re an entertainment company and you have to really understand your guests no matter what you might be selling – be it travel, toys, theatre, movies. I really love learning about all the different nuances in all these different countries and the consumer insights and how you really have to listen to the market.”

For example in Japan, the target customers are young adult women who tend to travel to Disneyland or Walt Disney World with their best friends.

Meanwhile the Australian market considers coming to Disneyland or Disney World as part of an overall visit to the US because they’re coming such a distance.

“For Australians, it’s what does that experience look like that they’re not going to get at home and how does it complement their US trip,” she says, adding that guests typically are a mix of families and young adults. “They’re more interested in our Disney Springs shopping area or it’s more about the attractions.”

Having recently started to work on attracting travellers from South Korea and understanding how Disney speaks to consumers there, she says the consumer profile changed again.

“In South Korea, Star Wars is not on their radar so Star Wars: Galaxy’s Edge to them, that new land of ours, yes it’s interesting, but it’s not on their radar – they love Marvel characters,” she says. “So when we’re thinking about creative choices for South Korea, it’s all about Marvel, and what can they do and how they can interact with Marvel when they come to one of our theme parks.”

Describing her team’s role within the Canadian market as being there to, “inspire, excite and motivate Canadians to take their family vacations with us to Disney World, Disneyland, on a Disney cruise, Adventures By Disney, or Aulani,” she says it’s important to never assume consumers know about what’s new.

“You could say Star Wars: Galaxy’s Edge, it’s going to be an amazing experience and everyone’s going to talk about it so we shouldn’t need to market it but that’s not the case,” she says. “You need to let Canadians know all about Star Wars: Galaxy’s Edge at Disneyland and World and what it is. It’s 14 acres of land never seen before so it’s our job to be able to tell that story in the market. My role is to rally the troops and make sure that we’re telling the story and we’re doing it in a way that’s relevant to the different market segments.”

Having recently attended the opening of Star Wars: Galaxy’s Edge at Disneyland Resort, which is soon forthcoming at Disney’s Hollywood Studios at Walt Disney World Resort, she says seeing the project come to life after years of working on it was memorable – along with getting up close and personal with Harrison Ford and Mark Hamill.

As for her start in the industry, Morrison says she didn’t know she was destined for travel, but had a good idea of what she didn’t want to do.

“I saw myself doing anything besides selling photocopiers,” she says. “I didn’t know what to do but I knew I wanted to sell an experience versus a thing.”

Her first foray into the field was as a sales rep for Carnival Cruise Line, where she worked for over a decade.

“I was lucky enough to have a really good friend, who is actually in the travel industry, Wendy Davis, she owns Zebrano Travel and at the time she was working for Carnival Cruise Line,” she says. “I got the interview and I got the job and the next thing you knew I was driving all over Southern Ontario and Atlantic Canada selling Carnival Cruise Line. That’s how I got into it, realized from then on I loved it because it was basically putting on a show being a cruise rep there was a lot of opportunity to do all sorts of events, public speaking with the famous cruise nights, so I really loved that aspect of it and loved being in the travel industry.”

Although she had loved all the travel associated with the gig, things changed after she had her daughter and then “like fate” Disney was looking for someone to head up the sales team in Canada.

“They thought of me and called and I said I have a daughter now and they were thrilled,” she recalls. “The thing I love about Disney is it’s so family friendly.”

Having worked at Carnival at a time when the cruise line was growing by leaps and bounds, she maintains that entrepreneurial spirit to this day.

“We’re a big company Disney, and a lot of people always say to me well why do you need to market?” she says. “We can’t rest on that because you just can’t take it for granted with what our competition is doing and how smart they are and how innovative they are. We have to always be on our game and be entrepreneurial. Never think that you’re just a big company and that’s fine. It really has helped in this role to take risks to really push the team here on let’s look for something new, don’t rest on your laurels.”

Looking back on the past 17 years with the company, she says getting the two WestJet planes custom painted is among some of the many highlights.

“Working with the great WestJet team on coming up with concepts for the Mickey plane and the Frozen plane and launching those with the big reveal parties that we had, that’s definitely up there,” she says.

Another was being part of the team responsible for the opening of Shanghai Disney Resort in China.

“I would say another thing that’s a big plus in the career is fighting for the Canadian marketplace and what we need when it comes to Disney,” she says. “We know that we’re a premium vacation and we know that it’s an investment in a family vacation with us, but also recognizing that our currency when it’s down it can hurt Canadians travelling to the US so fighting for the market and coming up with Canadian ticket offers and getting those into place I would also say that’s a big accomplishment.”

On a personal note, Morrison is currently in the process of getting a certificate through The Conference Board of Canada and the DeGroote School of Business at McMaster, which is centered around being on a board.

“It really helps you understand what it means to sit on a board be it public, private, volunteer or paid. And what’s your responsibilities and what’s your impact, so that is what I’m planning to do down the road, is think of how I can contribute, how I can sit on boards, and have a voice,” she says. “I think it’s really important that women get more involved in companies that we personally are invested in.”

Although women often have the purchasing power within a household, and decide on many factors from where to shop or where to study, she says they are not well represented on boards.

“Even the Canadian government has mandated that 30% of any board should be made up of women,” she says. “I think we should have our voices heard.”

When it comes to how the company stays ahead of the curve in a competitive industry, she points to Star Wars: Galaxy’s Edge as a perfect example. Not only are they always adding something new, they are constantly appealing to new markets and demographics.

“Working for Disney, what I love about the company is they’re investing in finding companies that complement us like Pixar, and then bringing Pixar to life at the parks, I mean that is fun,” she says. “Like Toy Story Land – how cool is that? You’re the size of a toy! It’s fun and innovative and purchasing Star Wars the company and now being able to play with all that great product. So that’s the thing with Disney. It’s not the same Disney of 20 years ago. There’s always something new for different lifestyles, different ages, different families.”

The ever-changing environment is also part of why she’s been with the company for 17 years.

“A lot of people ask me why stay? There are so many great companies you can work for. It’s not the same company. Every year there’s something new,” she says. “And you get to play with the most amazing assets like Star Wars: Galaxy’s Edge I mean how cool is that that we actually get to build creative advertising campaigns around Star Wars and actually be on phone calls with Lucas and people who built Star Wars. We’re talking to the actual set designers, or we’re talking to the marketing people at Lucas about what BB-8 would do or not do. And that’s what I mean when I say we’re not just in the travel business, we’re in the entertainment business.”

Did you have a Disney experience growing up?
I did. Growing up in Owen Sound and made the trip down by car. I think my first trip to Disney World was when I was 11 and who knew that I was going to go back and work for the company, but it’s been great.

What’s your favourite attraction?
I usually say Tower of Terror, but I think I have to switch it now to Flight of Passage, our Avatar in Pandora in Animal Kingdom. You feel like you are flying.

What about your favourite thing to eat?
Dole Whip. Pineapple Dole Whip.