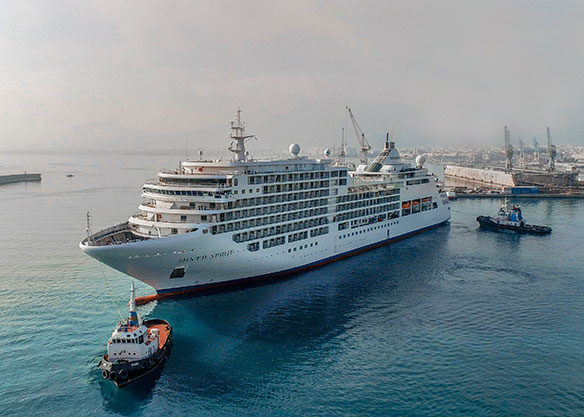 Royal Caribbean’s June acquisition of some 70% of ultra-luxury Silversea Cruises is already paying dividends for the Italian line, with the recent announcement that three fleet additions are in the works – two Evolution Class ships and a 100-passenger expedition vessel, with delivery to begin in 2022.
Making the announcement, RCCL chairman and CEO Richard Fain stated, “We are excited to get to work helping Silversea grow and realize its ambitions. There is tremendous potential in the ultra-luxury and expedition markets of the cruise industry.”
Silversea executive chairman Manfredi Lefebvre d’Ovidio added, “With our guests in mind we are pushing the boundaries of ultra-luxury and expedition cruising.”
And, on a recent tour of the Silver Spirit during a Quebec City stop en-route to Montreal, company spokesman Brad Ball had good news for Canadian customers who can pay in their own currency but who get a super-attractive exchange rate of 1.13% against the greenback.
Ball understated, “It’s a huge value and it’s locked in for the balance of the year” and added, “The rate will probably increase for 2019 but it will definitely remain below par.”
Given the size of the market versus the US, Silversea is “doing incredible business in Canada,” said Ball who explained, “Canadians want value. They don’t want sticker shock and they appreciate the fact that they may pay more but they get more.”
He pointed out that the product is 100% all-inclusive save for a modest $60 surcharge at two specialty restaurants among the eight dining options on board the Spirit.
This spring the Spirit underwent a two-month dry dock renovation That involved cutting the ship in half and adding a 15-metre midsection, providing increased space and enhanced amenities inspired by the line’s flagship Silver Muse, which joined the fleet early last year.
As a result of the lengthening, the deck nine pool space has been significantly enlarged, adding a large beach area and more sun-deck relaxation room for the vessel’s 600 guests.
Guest accommodation options were upgraded and, besides implementing décor enhancements throughout the ship, the renovation improved the layout of the Spirit’s public spaces and the reformatting of dining choices to the eight restaurant layout.
During the ship tour Ball pointed out, “Unlike other lines, we never lose the connection with the outdoors because there’s no atrium and no inside cabins.”
Silversea’s nine-ship fleet currently sails to some 960 destinations on all seven continents. From Jan. 6 to May 25 next year the Silver Whisper will be scoring an industry first by calling at 62 of those ports on a world cruise, touching each of those continents, including Antarctica.
As a heads-up for retailers, Ball explained that the line caters to well-heeled baby-boomers – not millenials. “We do welcome children but we do adult programs well and we won’t reduce their space to cater to kids,” he stressed.
And, in another heads-up, he recommended booking early for the accommodation of choice noting that, unlike other lines, the most expensive suites on Silversea are the first to sell out.