Home › Digital Post › The sisterhood of the travelling women

The sisterhood of the travelling women 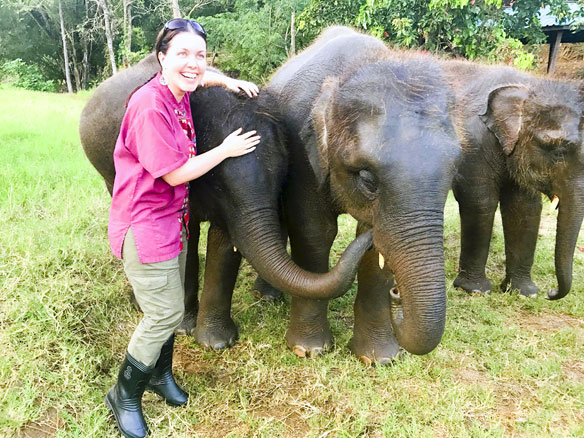 They’re movers and shakers. Their contributions have changed and continue to change the nature of travel, both in Canada and around the world. In this week’s issue, Canadian Travel Press’ monthly series of profiles on women in travel, continues with Jennifer Haddow, the owner and director of Wild Women Expeditions.
Wild Women Expeditions – the world’s largest women-only tour operator – may take travellers on trips to ride horses in Iceland, trek Machu Picchu or see the Pyramids in Egypt, but for owner and director Jennifer Haddow, it goes far beyond curating travel itineraries.
“I sometimes joke that I don’t really feel like I’m in the vacations business,” she tells Canadian Travel Press from the company’s headquarters in Corner Brook, Nfld. “I know what it looks like we offer – we offer active adventures. All of our trips are outdoor-oriented, all of them are active, whether it’s cycling, horseback riding, trekking, kayaking or canoeing, but I really feel like I’m in the business of helping women connect with themselves, with other women and with nature.”

In the beginning
Founded in 1991, Wild Women Expeditions (WWE) initially offered canoeing trips on remote Ontario waters before expanding to include wilderness trips across the country. After 20 years of operations in Canada, Haddow bought the women-only travel company in 2010 as the previous owner was retiring, and set her sights on global growth.
“A lot of women had Machu Picchu on their bucket list and to climb Kilimanjaro and they wanted to go to Thailand so I was just completely inundated with requests from women to offer these new tours,” she says. “I think we’ve been really led from the inside of listening to our clients and that guides a lot of how we’ve developed and grown.”
Additionally, Haddow says her background in international development, social justice and environmental conservation also played a hand in the process.
“I really wanted WWE to be contributing more to sustainable tourism and community development and having an impact in those ways,” she says. “Part of the choices that we’ve made as we’ve grown is where can we be bringing value to communities, where can our tours have an impact on helping protect wild places, so sustainable tourism is very much at the heart and soul of what we’re all about.”
By 2018, the company will operate tours in 26 countries, including new itineraries in India, Patagonia and Costa Rica.
While they were trail blazers of women-only adventure travel in the beginning, she says today the niche is very much recognized in the industry. 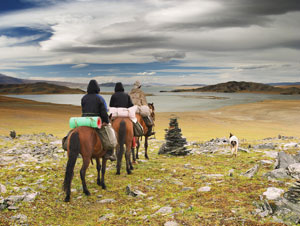 Mongolia is one of the best destinations to experience on horseback.

It’s all about the sisterhood
Although there are a myriad of reasons why participants opt for a women-only adventure – such as feeling the support of being surrounded by other women or being more comfortable trying a new activity without having men around – she says one of the main takeaways is a sense of sisterhood.
“We’re not anti-men at all, but I think there is a space for women to just gather together, as there is for men. You know how it feels like when you have a group of women and have a girls’ night out. It’s just different,” she says. “I think when women go out and they have a challenge together, climb a mountain or whatever it is, there’s this bond and trust that develops. I’ve had so many women say these women that were strangers on day one were sisters by the end of the trip, and I feel so much support and safe. They come back and say one of the best parts was the friendships that they made, this bond, the sisterhood.”
While she doesn’t discourage solo travel, Haddow says many of its tours run in places some travellers may not necessarily feel comfortable going to on their own.
“There’s a lot of fear around travelling alone. We provide that kind of resource for them that they can go to the back country of Mongolia, they can go into rural Egypt, and they don’t have to be afraid. I think that’s really valuable, so that’s why we’re here,” she says. “We want to get women out to places they probably wouldn’t get to on their own. We take women into the Great Bear Rain Forest, and places that I think a lot of women dream of going to, but you’re not just going to go pick up and go trekking in the back country of Mongolia by yourself.”

The power of travel
Whether its mothers whose kids have moved out of the house, recent retirees or those who are widowed or divorced, she says many women who go on WWE adventures use the trip as a stepping stone to making changes and embarking on a new chapter in their lives.
“If they’re recovering from illness or going through some kind of transformation, when they go on a trip to see Mount Everest or climb Mount Kilimanjaro or whatever the challenge is, I think they come back from these trips having a whole new lease on life,” she says. “I think that for a lot of women doing an epic adventure like some of the ones we offer can usher in this sense of okay, ‘Stella’s got her groove back and I’m 50 and fabulous.’”
Even though being active is at the core of most itineraries, she believes the experiences transcend beyond being on a fun vacation.
“It’s really about the adventure and the experience that you bring back with you and how you use that to fuel the changes you want to make in your life and the work that you want to do on yourself or in the world,” she says.
Although some travellers are worried they aren’t active enough to go on one of the journeys, she’s hoping to change the narrative.
“I think women set up a lot of barriers for themselves – I get women asking me if they are fit enough – I just want to inspire and encourage everyone and say you are so enough,” she says. “You can do more than you think you can sister, and women get really excited about being in that kind of motivating group. They cheer each other on.”
While the majority of WWE travellers are typically between 40 to 60 years old, Haddow notes a recent participant skewed a little bit older.
“There was a woman who was 80 years young who did one of our canoe trips – I would say a pretty advanced canoe trip. And she was a very, very experienced canoeist, but she was 80,” she says. “I’m half her age and I thought I can’t wait to get older and be this badass.”

What’s selling well?
The most popular destination that we have – I can’t believe this, but it’s true – is Mongolia. We’ve been selling out trips over a year in advance. We’re running two different tours in Mongolia. A horse trip, so Mongolia is one of the best destinations for horse culture and they have some of the original wild horses. Then we have more of a multi sport tour, which is hiking and kayaking, and cultural activities where you’ll stay with nomadic families in the yurts.

If you had to pick just one, what’s a destination you’re really passionate about?
Egypt. I’ve lived in Egypt, I’ve travelled there many times over the last 20 years, and it’s a very special place for me personally. After I bought the company I wanted to introduce an Egypt tour because I knew how much fear mongering there is about travel to the Middle East in general. My experience with Egypt has always been so beautiful and so positive and I really wanted to share the experience of Egypt that I had with women. Of course, who doesn’t want to go and see the Pyramids or sail on the Nile. Offering a tour in Egypt became very personally important because Egypt is a country that relies on tourism. People live and die by the tourism industry and when tourism shuts down people suffer immensely.

What do you say to those who ask if it’s safe?
Just to illustrate, I brought my young son to Egypt last year and so obviously if I thought it wasn’t safe, I wouldn’t bring my child. So I definitely walk my talk on that one. There are very specific areas that we don’t go to and I would say are dangerous because there’s an active conflict, just like there’s also active conflict in parts of Turkey and a lot of places in the world. But these are big countries. You have to look at it as objectively as possible and say just because there’s a conflict in North Sinai doesn’t mean that has anything to do with how safe people are in Luxor.