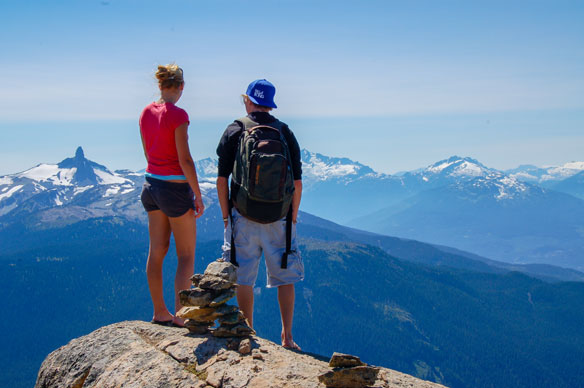 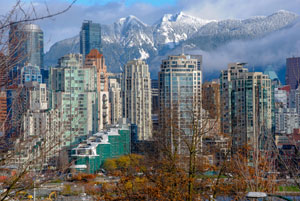 The Vancouver skyline in winter, with the North Shore Mtns. as a backdrop.

The hard lessons of overtourism experienced by destinations around the world found their way into the agenda of the recent BC Tourism Industry Conference, as stakeholders sought future directions for their businesses. Information about overtourism trends, plus some solutions, were tabled by Stewart Moore, founder of Earth Check, during the conference in Vancouver in early March.

Overtourism is starting to have more relevance in Canada’s comparatively less populated destinations, including B.C. and Alberta, as the first waves impact places like Banff, Jasper and the Colombia Ice Field, to name a few.

Moore did not make specific references to Canadian destinations, but instead gave delegates lots to ponder based on his experience of other world tourism hotspots. Moore is also the executive director of the APEC International Centre for Sustainable Tourism (AICST). 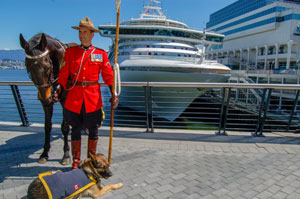 As one potential strategy, Moore suggested that tourism stakeholders should extend their planning horizons and look further down the road – not two or three years ahead, but on a quarter-century scale. By setting goals with a 25-year timeline, tourism business operators will be able to make better plans from a business, operational and environmental standpoint, he said.

“That was a big takeaway,” said Walt Judas, CEO of the BCTIA, who welcomed about 550 delegates to the JW Marriott Parq Vancouver hotel for the three-day event. “We tend to look at three- to five-year increments, but his advice is to look 25 years ahead to plan for how the destination will be experienced by visitors at that time, and also to plan for its livability by residents. We need to work with government and our partners to achieve this outlook.”

Tourism bullish in B.C.
Moore made his presentation at the same time as the province was celebrating milestones in arrival and tourism receipts. British Columbia’s tourism industry is outpacing provincial economic growth, contributing $9 billion to the gross domestic product in 2017, said Lisa Beare, the minister for tourism, arts and culture. That amounts to a 6.7% increase over the previous year, a pace that puts tourism ahead of the 4% provincial average, she said. 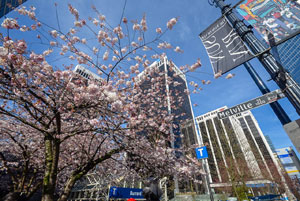 The stats demonstrated that tourism had added the largest value to the provincial economy between 2007 and 2017, relative to industries like oil and gas, mining, forestry, logging and fishing.

B.C. greeted nearly 6.1 million international visitors in 2018, an increase of 6.4% in twelve months, which the ministry says is a new record. Marsha Walden, the CEO of Destination BC, said the trend for the coming year appears to be on the same track.

“By all accounts, 2019 is going to be another strong year for tourism across the province, bringing jobs and opportunities to communities across British Columbia,” she said.

At the same time, the ministry announced a new strategic framework that is designed to guide year-round tourism growth, while protecting the province’s natural environment.

Judas says the framework will allow the industry to reach its full potential as one of the province’s leading business sectors. “The new strategic framework for tourism provides a blueprint for both the growth and sustainability of B.C.’s visitor economy for the foreseeable future,” he said.

The Golden story
Looming with immediate proximity is the coming season of spring/summer/fall tourism in Canada. But these months now have an ominous aspect to them, as suggested by the ever-present possibility of wild fire outbreaks – especially in the wilderness of Alberta and B.C. The past two years have seen wild fires scorch thousands of hectares of forest in the two provinces.

In fact, wildfires burned through 12,000 sq. km. of B.C. territory in 2017 and a further 13,000 sq. km. in 2018. Wildfires are getting more intense and starting earlier, due to drier climate conditions and the greater accumulation of dry fuels, says a report by the University of Alberta. It says that the wildfire season in Alberta used to start around April 1, but it is now beginning around March 1, and that a third bad wildfire season could be in the cards for the West this year.

The subject of wildfires, however, did not make it on to the presentation agenda at the conference. This is consistent with the surprising stats posted by Golden, B.C., indicating that arrivals in the mountain town had actually risen during the smoky 2018.

New statistics by Tourism Golden show that the town’s tourism revenues grew by 7% from January to December 2018 (to over $32 million) – despite a record year of wildfires in the province, says a recent release.

The growth can be attributed to factors like marketing efforts that targeted the shoulder seasons, plus winter, resulting in higher occupancies in all months except April.

Led by the 2018 Freeride World Ski and Snowboard Tour, occupancy rates for January and February rose by 12.1% and 13.8%, respectively. Occupancy rates did, however, dip in July and August, due to wildfire publicity symptoms – even though Golden was not threatened by any fires.

It’s this kind of information blowback, as a consequence of rapidly spread misinformation, that will keep the wildfire issue on the agenda of tourism stakeholders and authorities, said Judas. Strategies are now being considered that will help negate the impact of the fires on tourism arrivals, to be implemented this year.

The crisis response file is a priority at the BC ministry of tourism, and a tourism emergency response committee has been formed.

One tool that he cited as successful in the recent past is the #RealTime used by Travel Penticton, which quickly tracked and reported on the progress of wildfires, smoke levels, etc. for real-time consumption online, including photo sharing. “It was simple but innovative, and really helped deter cancellations,” said Judas. “But there is still lots of work to be done.”

Sustainability priorities
Sustainability continues to be high on the agenda for many tourism businesses and organizations in B.C., and efforts on that front were recognized as this year’s BC Tourism Industry Award winners. 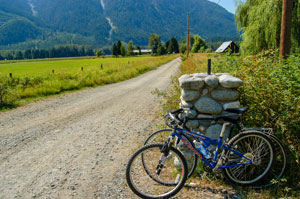 For instance, the Thompson-Okanagan Region of B.C. was a winner of the Innovation Award for having successfully achieved the Sustainable Tourism Destination accreditation from Biosphere International and the Responsible Tourism Institute. It is the first destination in the Americas to have earned this certification.

To get it, Thompson-Okanagan had to provide answers and evidence for 137 questions covering the 17 United Nations Sustainable Development Goals (SDGs). This was followed by an on-site audit to confirm the evidence, complete the documentation and launch an ongoing action plan for continued certification. The next steps include the implementation of this annual action plan.

Thompson-Okanagan tied with Fishing BC in earning the Innovation Award, which recognizes innovative initiatives or marketing campaigns that drive more visitors to or within British Columbia.

In the case of Fishing B.C., a collaborative marketing campaign brought together over 300 fishing resorts, guides and charter operators under one provincial marketing effort, to better align the fishing sector with federal, provincial and regional strategies.

Fishing B.C. shifted the whole sector away from traditional marketing tactics to the use of inspiring digital content and targeted digital campaigns, said TIABC in its award judgment.

“They implemented a data-driven marketing approach, as well as industry leading photo and video techniques to showcase the true nature of B.C. fishing experience,” stated TIABC. 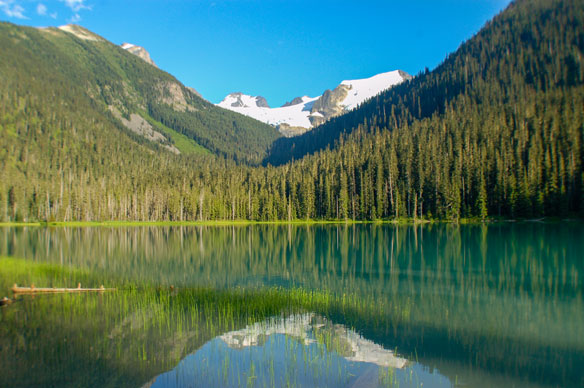