Home › Digital Post › So amazing, visitors can hardly bear it

So amazing, visitors can hardly bear it 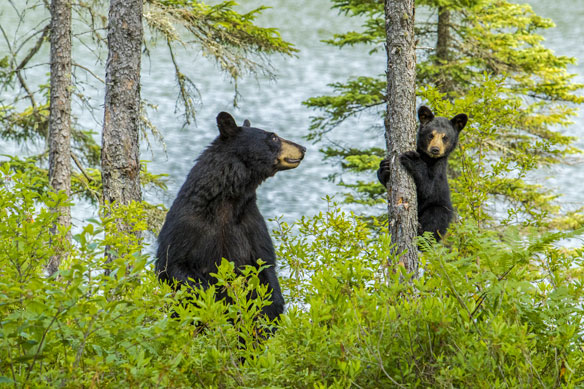 Jacinthe Doucet says the part of Quebec she promotes is offering those who would be absolutely giddy about the prospect of seeing free-roaming bruins in the wild an opportunity to grin and bear it.

Among wildlife living in area forests are healthy numbers of black bears, which Doucet reports are now attracting steady streams of bear-curious tourists from other parts of Quebec and elsewhere during the May to mid-October period, with animals known for hibernating in winter regularly up and about in those months.

Some big surprises
Some six area hotels now have guided bear-viewing tours, with participants first travelling by vehicle and then hiking to shacks from which they’re almost certain to see bears, thanks to “niblets” of corn and perhaps molasses placed near the structures to attract the animals, which have strong senses of smell.

The bruins love both corn and molasses but Doucet says those offering the tours are careful to not place enough of the bear treats to interfere with bearsʼ natural diet.

“You can see them very clearly. Bears are all over in our region,” Doucet says, adding viewers may be around 100 feet from both adult bears and cubs.

The tours start a little before sundown and before darkness sets in, with Doucet reporting that the bears are more active then. Tour participants usually see four or five bears.

“Some of them are big,” Doucet continues, adding the tours – which usually provide viewings of 30 to 45 minutes – are safe.

Personality galore
Curious cubs may begin to approach a viewing shack, but will be quickly intercepted by their mothers, who are wary of a human scent.

Doucet says each bear has its own personality, and viewers will not only see them snacking, but interacting with each other, enabling tourists to gain insights into bear behaviour.

Doucet adds that the bears remain wild, free to come and go as they please, and the viewings should never be compared to a zoo visit.

But it is remarkable that viewers can get so near to wild bears, she says.

“It’s amazing,” Doucet adds. “You never believe that you can see them that close.”