St. Vincent and the Grenadines’ tourism takes off with new airport 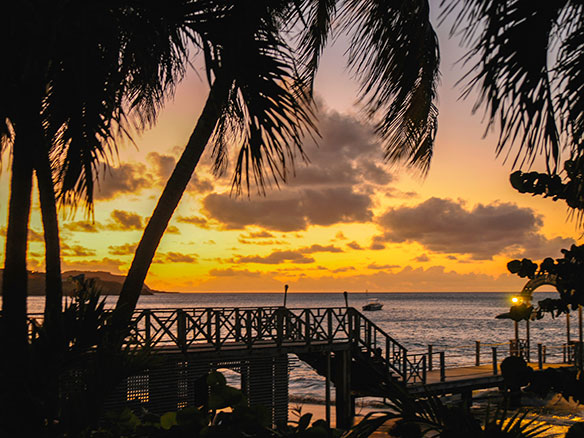 (Photo above: Dramatic sunsets await those visiting St. Vincent and the Grenadines.)

Last year’s opening of Argyle International Airport has given the tourist trade in St. Vincent and the Grenadines a major shot in the arm, with Canadians among others giving more attention to a destination that has become easier for us to reach.
The facility has meant the island of St. Vincent is now able to host larger planes, making it considerably more attractive to those who previously had to opt for more roundabout routes to reach the destination. “Accessibility had always been a challenge for us. Now that we have the airport up and running, we have seen improvement in the arrival numbers,” Cecil McKie, St. Vincent and the Grenadines’ minister of tourism, sports & culture, said during a Toronto visit.
Sunwing is providing a summertime Toronto-St. Vincent connection, while Air Canada rouge will offer the same route starting Oct. 25, with service reaching twice a week on Dec. 16 and continuing through April. Other carriers that have decided to serve St. Vincent include American Airlines, which will arrive there Dec. 15.
Much of St. Vincent and the Grenadines’ tourist trade has traditionally revolved around sailing, with Glen Beache, CEO of the St. Vincent and the Grenadines Tourism Authority, saying tourists wanting to sail in an area where there’s always an island in sight can set off in a rented boat by themselves if they’re skilled mariners or hire someone to skipper the boat for them if they’re not.
An Easter Regatta is an annual fixture.
The island of Canouan last year saw the opening of the Glossy Bay Marina, which Beache labelled “the best of its kind” in the area, adding it can host “98% of the world’s styles of yachts.”
Tourism officials add that ecotourism enthusiasts will be in their element in St. Vincent and the Grenadines, which has green landscapes suited for the likes of hiking trails that will enable them to see, among other things, a volcano. Indeed, St. Vincent landscapes appeared in all three Pirates of the Caribbean movies, they note.
Sea turtles and different birds, including parrots, can be found there.
The destination is also home to botanical gardens that date back 250 years.
Another option for those visiting St. Vincent and the Grenadines is Mustique, which regularly hosts celebrities, including British royalty.
Meanwhile, the destination sees an annual carnival that begins in late June and continues into early July, with next year’s starting June 28.
“We’re unique in the energy and the intimacy that we pack into carnival,” said the carnival’s Ricky Adams, adding participants can opt for an experience that delves into the carnival’s cultural side or one that largely focuses on partying.
Carnival organizers are looking at creating packages for foreigners wanting to attend the event.
Other events include an October tennis tournament that will have input from a senior official in this country’s Rogers Cup, a February music festival in part showcasing blues, and an August festival that will be a showcase for folk music.
Beache added that Canouan has the only Mandarin Oriental hotel in the Caribbean, and St. Vincent is slated to gain an upscale resort called Black Sands, which will first open with five villas.