Little works are a big deal for elephant conservation 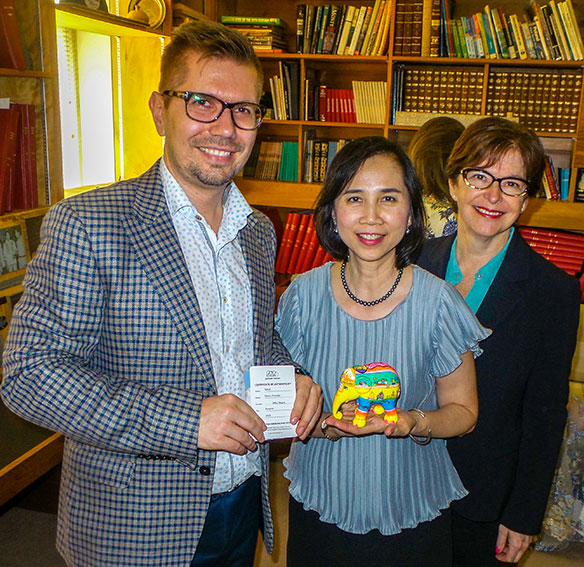 Small Thai carvings can help safeguard large Thai creatures.
Thai tourism authorities say those who visit Thailand and are sympathetic about the welfare of the country’s elephant population can help protect the creatures, in part by purchasing colourful replicas of elephants produced in the northern Thai city of Chiang Mai by Elephant Parade, started around 12 years ago by a father and son who visited Thailand and decided to help raise funds to assist the creatures.
Elephant Parade has since been placing life-size replicas of baby elephants – sizable creatures, despite their youth – in cities around the world, helping raise awareness of elephant conservation; and its other works include creating what’s believed to be the first prosthetic leg for a pachyderm, in this case a young Asian elephant that stepped on a land mine, but which is now leading a healthy life in a Thai sanctuary.

Dwindling populations
Elephant populations have dwindled in most of the African and Asian countries in which they’re found, as the likes of poaching and human encroachment take their toll.
Viktor Spysak of the Tourism Authority of Thailand’s Canadian office says elephants are somewhat iconic of Thailand, and tourists are often fascinated by them.
Southeast Asia has attractions offering tourists the likes of elephant rides, rides which have come under criticism from animal rights activists, who say pachyderms shouldn’t be used for human entertainment.
But Spysak adds many elephant retreats in Thailand are completely altruistic.
“Numerous farms and camps now take care of old, sick and [previously] abused elephants by creating special clinics and other care facilities, engaging domestic and foreign volunteers to work at these farms and assist in preserving and reviving the elephant population in Thailand,” he reports. “Foreign tourists can visit ethical elephant farms to help them generate revenue, so these projects can follow their missions.”

How to help
Tourists help in part by feeding and bathing elephants under supervision of Thai caregivers.
Andrew Clark of Bangkok-based Smiling Albino, which offers guided tours in Thailand and other Asian countries, says his company has “always been a champion of ethical elephant treatment” and supports several Thai elephant sanctuaries.
“The Elephant Parade enterprise began well over a decade ago, and we attended the first Thai exhibition,” he says. “We fully support Elephant Parade and all other endeavors that support sustainable, ethical elephant camps and refuges.”
Clark says tourists who are sympathetic to elephants’ well-being can “contribute to ethical elephant enterprises, camps and foundations.”
Those wanting to so should do research into the project they’re considering helping or consult a DMC to “make sure their contributions lead to the animals’ well-being,” rather than questionable operations, he cautions.
Information on Elephant Parade can be found at elephantparade.com. Smiling Albino’s website is smilingalbino.com.