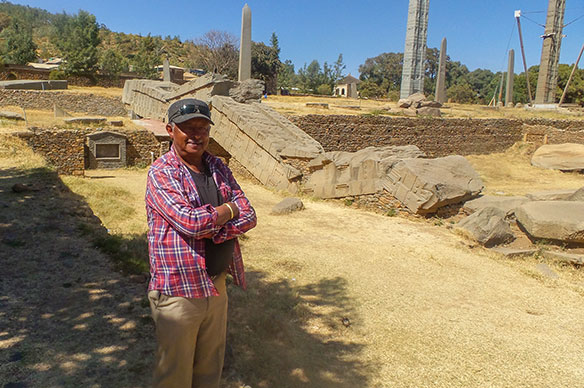 (Photo above: Tour guide Chanyalew Gebremdehin stands besides a fallen obelisk in the city of Axum.)

Ethiopian tourism officials are inviting tourists to follow in some regal footsteps they proudly state also belonged to a storied Biblical figure.
Those officials boast that the city of Axum stands on a site where the Queen of Sheba once held sway, and those visiting it will see long-standing reminders of its past greatness – along with another reminder of its glorious history that unfortunately is no longer standing.
The Axum area – mentioned in ancient Greek and Roman literature – is home to an archeological site that has several obelisks, with two that are still upright reaching heights of 26 and 23 metres, while another that toppled and broke was 33 metres high and likely weighed 520 tonnes, says tourism guide Chanyalew Gebremedhin.
The latter obelisk is marked by intricate carvings on its sides that are readily visible to visitors to the site. Gebremedhin says some believe it was deliberately knocked down by a monarch who opposed the Orthodox Christianity that had taken hold in Ethiopia, while other speculation has it that it fell immediately after being erected because it was improperly balanced.
The Axum area, excavated in part by a British archeologist, is also home to several ancient subterranean tombs skillfully carved from rock that tourists can enter, and a local guide says most of what those who inhabited the region long, long ago created still remains hidden from sight.
“Only 5% has been excavated,” he says. “Axum history is [mostly] still underneath the ground.”
Addis Ababa-based Gebremedhin praises the Queen of Sheba for reaching out to other parts of the world and notes her visit to Jerusalem saw King Solomon father a child with her.
Meanwhile, the Queen of Sheba’s name brings instant recognition around the world, but Gebremedhin says that, while Ethiopians are hugely proud of her, they don’t refer to her by the moniker Westerners do.
“Her real name in Ethiopia is Makeda, but internationally she’s known as the Queen of Sheba,” he reports.
Ethiopian Airlines has non-stop Toronto-Addis Ababa service. More information can be found at ethiopianairlines.ca.
The airline is promoted by RadonicRodgersStrategy in this country.