Using the power of indigenous craft and art to reach people 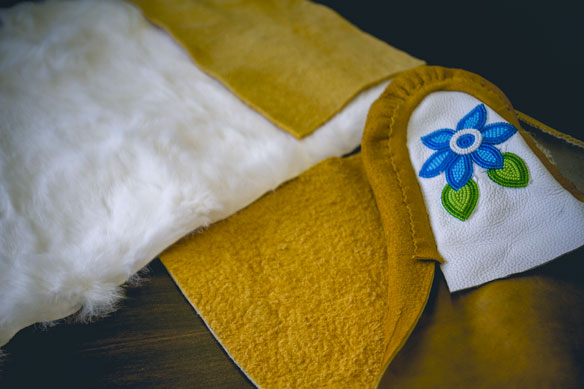 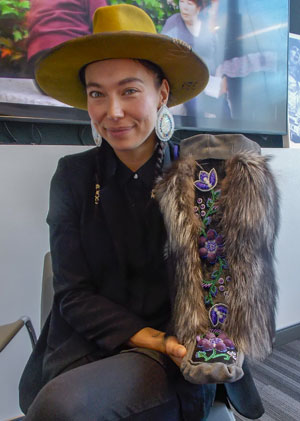 Sarain Fox with a exquisite example of one of the Storyboot School’s mukluks.

Ask Sarain Fox what the Manitobah Mukluks Storyboot Project is all about, and she’ll tell you the following: “It’s really all about people. Indigenous people and the commitment to ensuring that indigenous craftsmanship and the art of mukluk making and moccasin making continues long into the future.”
But perhaps more importantly, Fox said the Storyboot School “is also about the economy – creating a meaningful, micro-economy for indigenous communities – and the Bata Storyboot School, in partnership with [the] TreadRight [Foundation], is really about expanding that and opening it up to the public to see the potential of meaningful relationship, meaningful partnership and, quite frankly, the power of craft and art to reach people.”
The story of the TreadRight Foundation’s involvement with the Manitobah Mukluks Storyboot Project began a couple of years back when it provided a grant to establish the Storyboot School at the Bata Shoe Museum in Toronto where indigenous artists and artisans teach the heritage art of mukluk and moccasin making to both indigenous and non-indigenous students. 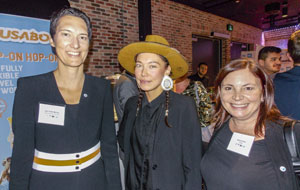 Celebrating the TreadRight Foundation’s 10th anniversary at the ME to WE Global Learning Centre in Toronto, from l to r, are Insight Vacations’ CEO, Ulla Hefel Bohler, Sarain Fox, and Trafalgar vice-president, Anita Emilio.

As well, many of The Travel Corporation’s brands feature the Storyboot School at the Bata Museum in their itineraries that include Toronto.
And just in case any readers think there’s a typo here, it is Storyboot, not storybook. Fox explains: “I think that one of the things that happens at Storyboot school is that people tell their stories. It’s not just indigenous people learning, it’s also settlers who get the opportunity to partake in the conversations that happen when you’re using your hands to physically make things.”
In fact when the Storyboot School at the Bata Museum was originally launched, TTC’s chief executive, Brett Tollman observed that the initiative is “an excellent example of the ability artisans have to help sustain and promote invaluable cultural and heritage traditions, while at the same time empowering individuals by providing a livelihood.”
Said TTC’s chief executive: “Artisan activities like these are an essential component to many of the local economies in the places we visit. TreadRight and TTC believe it is of the utmost importance to be active in the strengthening of this indispensable heritage sector.”
Fox, who is a brand ambassador for Manitobah Mukluks, told CTP that: “I think that the really incredible seed that has been planted at the BATA is not only that it’s in this incredible metropolis [Toronto] and that visitors get to come and experience the work, but we also have Storyboots for sale there, so they get to take a piece of [the story] home.”
She continued: “This is our third year, and the important thing about TreadRight partnering with Storyboot School is that they also partner with Manitobah Mukluks. I think that it’s important for people to acknowledge authentic indigenous businesses. Without the global success of Manitobah Mukluks and the platform that they create, [the Storyboot School] just wouldn’t have that reach. We have the ability to reach into [Manitobah Mukluks’] networks and to reach into TreadRight’s networks and really create something that’s sustainable and, I think, it has reached an impact. I think there are lots of ways that TreadRight could have partnered and done something similar that wouldn’t have had that reach and that impact. And I think that it’s absolutely necessary for this program to continue.”

So what about travel agents, where do they fit in all of this?
“Well, I love TreadRight’s new hash tag – #MAKE TRAVEL MATTER,” Fox told CTP, before continuing: “I think when you’re literally the person that is curating someone’s experience – like a travel agent – letting them know that there is a wealth of knowledge that exists in the places that maybe aren’t the first look, look deeper, and make the choice to create a travel experience that has a real meaningful presence. I think in order to do that you have to see people and places through the land on which you are standing. So, in North America, that’s through the eyes of indigenous people – which might mean that you have to walk with us; put on a pair of moccasins and experience it.”
Observing that “travel agents are in an interesting place,” Fox said that’s because “they have the opportunity to put people’s eyes in different places because people really trust that they’re going to curate something special. They might not necessarily know what that means and so you really have the opportunity to say: Hey, this is a way to see this country that maybe isn’t based so much on commercialism and exploitation.”
Yet as an indigenous person, Fox pointed out that: “Quite often the events that are curated feel like travellers are just seeing us like we’re on display, and I think we’ve had enough of that. I think the time is now for people to come in and to hear our stories and to let our stories be a part of their story.”
(www.treadright.org/project/storyboot-school)

Reconciliation or Reconcili-ACTION?
You use the word ‘Reconcili-ACTION’ quite a bit. Can you explain it?
Absolutely.
Many people talk to me about reconciliation, and I tell them, listen, I’m kind of over that word. I think that real reconciliation is about the truth of where we’ve been and the reality of where we are now and the opportunity to go forward in a new way and so “Reconcili-ACTION” is ACTION.
In terms of [the travel] industry, this partnership [with TreadRight and TTC] is a perfect example. It’s not talking about what we could do, it’s about investing in things we actually can do.
I think it’s about settlers being a part of that as well – the ACTION part. We’ve been talking about reconciliation for a long time, [now] it’s time to make things happen. Make Travel Matter. Make Indigenous Storytelling Matter.

So how can the industry get involved?
They can invest in indigenous storytellers and people who are putting indigenous storytellers first, but they can also partake in some of the existing programs.
I think that often the industry puts themselves above programming, which puts them in a place where they actually don’t have any of the tools to even start.
So take a class. Go to the Storyboot School. Go down to the Native Centre and meet the people. Do some of the research. Do some of the work, so that you’re able and ready to take up the Action.
It’s a long learning curve, and I think the more that industries and settler communities and the population does their own work, the better they’ll be to talk to indigenous people.
I spend so much time educating people, and I would love to start the conversation where we’re both on the same level. 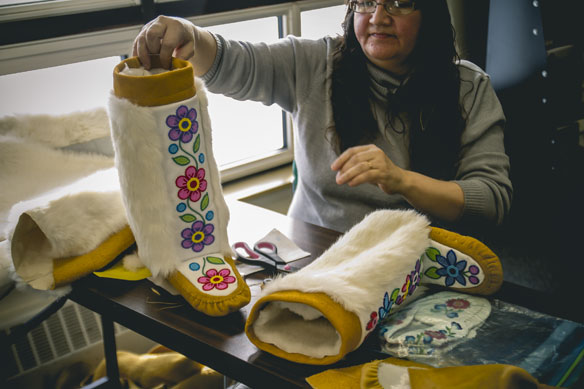