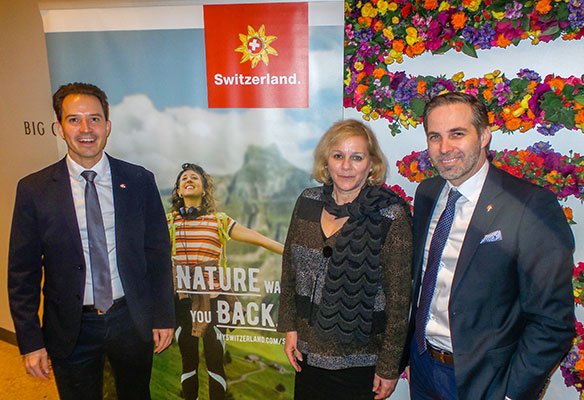 Swiss tourism officials are inviting those who like to go “a-wandering” along a mountain track to do so with alpine peaks whose names draw instant recognition worldwide as a backdrop.

Switzerland Tourism is promoting hiking opportunities in the alpine nation, with CEO Martin Nydegger noting during a recent Toronto visit that his homeland has 65,000 km of marked hiking tails, which nearly matches the 70,000 km of roads in the country and, if linked together, would circle the globe 1.5 times.

Nydegger said that hikers can opt for “once-in-a-lifetime” experiences in Switzer-land, such as hoofing it across a glacier or traversing the world’s longest hanging bridge, which is 494 metres.

“Hiking [promotion] is not new, but we’re going to give it new appreciation,” Nydegger said.

He cited three “iconic” hiking trails, among them the Via Alpina, which can actually have people end their trek by Lake Geneva, with the multi-stage trek covering 390 km. Participants can overnight in hotels or tents and can afterwards boast, “I’ve hiked the Alps,” he continued. The Eiger can be sighted on route.

Jura Crest is the easiest of the trio. Hikers will be able to see mountains from a distance.

Nydegger says Switzerland’s size means those who tire of being on foot will easily be able to find nearby transportation to continue their journey.

Meanwhile, Switzerland’s following in Canada is on the rise, with the country seeing 270,000 overnight hotel stays by Canadians last year, a 9.5% increase from the previous year. The actual number of Canadian visitors would be above that as some stayed in non-hotel accommodations.

Those same tourism authorities note Switzerland is easily accessible for Canadians, with SWISS linking Montreal and Zurich, while Air Canada connects Montreal and Toronto with Geneva, and Toronto with Zurich. Air Canada also has Vancouver-Zurich service from June to October, Air Transat has summer Montreal-Basel service and Lufthansa Group member Edelweiss provides summer flights from both Calgary and Vancouver to Zurich.