There’s more to Florida than meets the eye 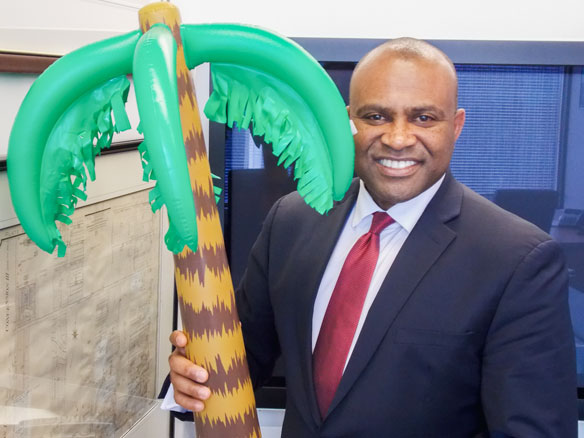 Ken Lawson (pictured above) isn’t shy about telling you that Canada is Florida’s No. 1 international market and that the Sunshine State is about to double-down on its activities here.
Lawson, who took over as president & CEO of Visit Florida in January of this year, was in Toronto this month to meet with key suppliers and let them know exactly how committed Florida is to the Canadian market.
“This past year, we had 3.2 million Canadians come to Florida,” Lawson observed in a conversation with Canadian Travel Press and that’s obviously a good thing.
However, he qualifies that, pointing out, “We’ve seen a decline in Canadians coming to Florida over the last 12 quarters. Now that’s still good for us, in terms of numbers, but it means other [US] states are going after Canadians, and, perhaps, we took our eye off the ball for a period of time.”
He explained, “We need to make sure that our message not only penetrates the snowbirds who are coming down, but [penetrates] new Canadians. We recognize there’s diversity in Canada – people look different than they did in the past.”
Along with recognizing the changing demographics of the Canadian market, Visit Florida’s boss also wants Canadians to recognize that: “We have more in Florida. We have diversity. And we want to make sure Canadians know about it. You can swim with the manatees. See a rocket ship go up. Go to a great restaurant. Have an adventure.”
Lawson also told CTP that Visit Florida – which made its biggest spend in Canada this past year – is looking to hire a group here to educate Canadian travel agents about the diversity of the Sunshine State’s tourism offerings and the range of selling opportunities that are available to them. The hiring process is expected to be completed some time in September.

Fully funded
Obviously, the battle over the funding of Visit Florida was a hot topic this spring, and Lawson was happy to talk about how it came about and how it was resolved.
“I think a couple of things led to the [funding] situation, and there are several things that led to the positive resolution. On the first point, although we had great results. Last year, we had our highest number of out-of-state tourists come to Florida. 112.3 million tourists came to Florida, and these people spent US$109 billion in our state – that’s 11.3 billion dollars in tax revenue captured by the state.”
And Lawson noted that Florida’s governor, Rick Scott, has put money into Visit Florida, and “every year he’s done that, we’ve seen an increase in tourism.”
However, Visit Florida’s president & CEO continued: “At the same time, as an organization, we failed to really communicate with the legislature the scope of our activi-ties. And then by virtue of not having a regular dialogue – we have partners that talked to the members, but we [Visit Florida] didn’t – I think although we had success, we didn’t really explain our processes.”
The result he said is that there was some things that made state legislators “scratch their heads and say what’s going on, because strategically, we may not necessarily have used metrics to drive our marketing decisions.”
As an example, he pointed to some of Visit Florida’s one-off marketing decisions that got results, but raised questions about why money was being spent in certain areas that seemed excessive.
“That raised questions,” Lawson told CTP, “and due to that lack of communication and not really being strategic about our actions that helped lead us into what I called the Age of Turbulence.”
And in the fight for full fund-ing, Lawson pointed out that the industry came together, “because one narrative from those who opposed Visit Florida was that Visit Florida only benefited larger attractions and industry partners, but what the industry was able to demonstrate clearly and to educate the members about was that ‘no,’ Visit Florida actually benefited small- and medium-sized industry partners.”
The result, he said, is that “with that continuous drumbeat by the governor and the industry, we were finally able to bring the House together and reach an agreement on full funding.”

Moving on
With full funding in place, Lawson said that Visit Florida’s board has just approved its marketing plan, and, for the first time in history, “the abundance of our state funding is going into marketing.”
“[We’re] decreasing sponsorships by US$11 million. We’re also decreasing overhead costs to under 10%.
We are focused on ensuring that each marketing strategy is based upon some type of metric that has a good return on investment for the state and our partners.”
As for Canada, Lawson said that “what’s really important is talking about market diversity – understanding the diversity of the Canadian marketplace and understanding the diversity of Florida.”
Going back to an earlier point in his conversation with CTP, Lawson said that “with Canada I think that we kind of thought that Canadians came in one shape, size and formation – but it has changed. We have our baby boomers – 50 plus – who may own a home in Florida, come to Florida regularly and perhaps have been there and done that. [Now they] have their house [in Florida] on Airbnb, and they’re travelling somewhere else with that money.”
He continued: “I think maybe we’ve taken our eye off the ball, so now we need to reach out to those folks and say that there’s more Florida than you’ve seen before.”
That message also applies to Canadians who looking for experiences, Lawson said, observing that Visit Florida needs “to make sure we expose both levels – to both snowbirds and also new Canadians – to [the diversity] we have to offer.”