TIAC town hall takes on the issues in Toronto 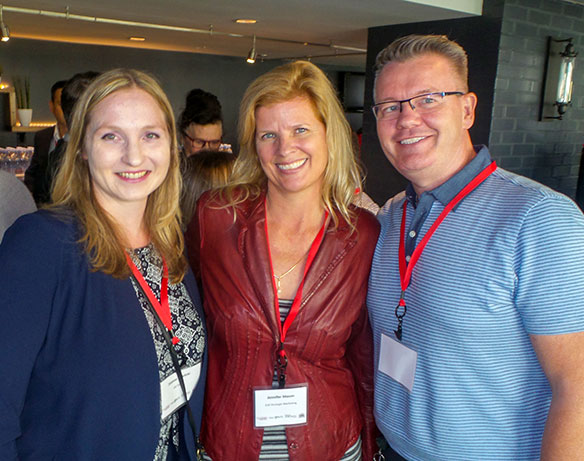 (Photo above: Joanne Pawlicki (l) and Patrick Leavey of The CN Tower and Jennifer Mason of Strategic Marketing were among those on hand for TIAC’s Town Hall event in Toronto.)

Several prominent people in the tourism trade want people outside their industry to show a little more love for travel and tourism.
Tourism Toronto head Johanne Belanger told a recent TIAC town hall session in Toronto that the “lack of understanding of the value of tourism outside of the industry” is baffling to her.
This country’s tourism trade frequently relies on government funding to get its message out and that funding is often inade-quate, she continued.
“It’s embarrassing when our country doesn’t have as much money as small cities in the US to market ourselves around the world,” she continued.
Tourism Toronto has long been having “these kinds of conversations,” Belanger continued.
TIAC’s Vince Accardi, in turn, told the gathering that new federal tourism minister Melanie Joly appreciates the value of tourism. But federal government decisions that affect tourism are often made outside of Joly’s department, he stated.
The concerns were raised at a time when this country’s tourism industry is doing well, with Maureen Riley of Destination Canada telling the crowd that 2017 was Canada’s best-ever year for tourism and visitations this year were up 2% through May, leaving Canada “on track to break that 21 million mark.”
Riley said this year being the Canada-China Year of Tourism is helping fuel the growth, with China being Canada’s fastest-growing market. Riley said over 10 million Chinese plan to visit Canada.
Chinese tourists are often willing to visit Canada outside of the peak summer season, a welcome development.
Meanwhile, Beth Potter of the Travel Industry Association of Ontario warned that the travel industry is often seen as unrewarding career-wise, with people often viewing it as “seasonal and low paying.”
Potter said those in the industry need to get students thinking about careers in tourism.
“There are great jobs [in tourism],” Potter stated.
Casey Vanden Heuvel of the Indigenous Tourism Association of Canada praised indigenous tourism’s growth and what it provides for tourists. There are now over 1,500 tourism businesses owned by indigenous people that “celebrate and showcase” their communities, he said.
Indigenous tourism “enhances the cultural awareness of the visitor,” he said.