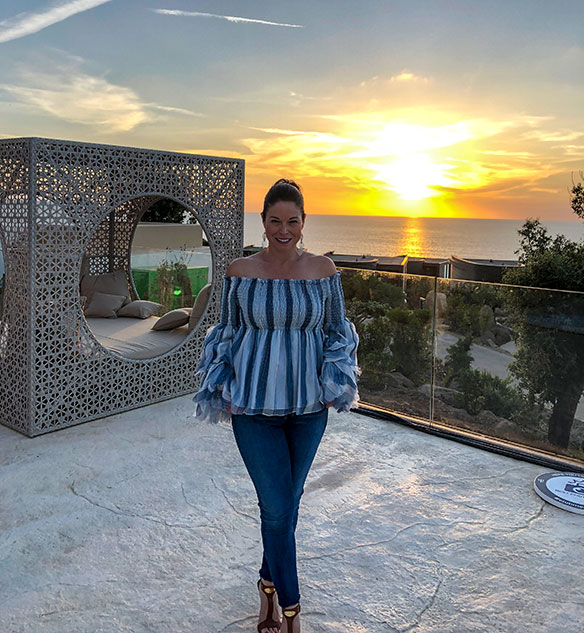 They’re movers and shakers. Their contributions have changed and continue to change the nature of travel, both in Canada and around the world. In this week’s issue, Canadian Travel Press’ series of profiles on Women in Travel continues with Carolyne Doyon, senior vice president, Canada and Mexico, Club Med.

For someone who is afraid of heights, embarking on an adrenaline-inducing flying trapeze lesson high above the ground can seem like a daunting task. But it’s having faced this challenge head-on that makes the experience stand out for Carolyne Doyon, senior vice president for Canada and Mexico at Club Med, years later.
“It took me a long time to go up the ladder, I was shaking, I thought that I would faint, and finally I overcame that fear and I actually did trapeze,” she tells Canadian Travel Press, recalling the moment at Club Med Sandpiper Bay she literally took a leap of faith. “There was not much style to it, and a lot of screaming, but the feeling that I got after was like I achieved something.”
Since it’s Club Med’s reputation as a pioneer and trendsetter that first attracted Doyon to the company, it’s no surprise then that not being afraid of taking risks is also something she applies to her work philosophy.
“Risk makes us grow and sometimes we grow through success, but we grow mostly through failure too,” she says. “Don’t be afraid to take risks, go for it, don’t be afraid of failure, and trust your instincts.”

In the beginning
Reflecting back on when she first knew she wanted to get into the travel industry, Doyon says growing up in a multi-cultural community in Montreal helped fuel her curiosity for other cultures.
“In elementary school, all my friends were from other nationalities, and I was really curious about their languages, about their cuisine, about their culture, so it started at a very young age,” she says. “And after I started to discover the world and to travel, I said to myself, wow, this is great. All this curiosity and this passion that I had, I decided well, I might as well make a living of it.”

After studying tourism, her first opportunity in the field was in the airline industry, where she worked on the operational side for carriers like Delta Airlines and Sabena for five years.
“I knew that I liked it, but there was so much more to the industry than the airline business,” she says. “So I decided to go into retail, for a year and a half, just to understand how the retail side of the industry was working. I had the operational experience, but it was important to understand how the distribution was done. Back then, you’re going back now almost 25 years, the Internet was not where it was today, the direct bookings were not what it is today, so for me, the retail side of the business was very important to understand. I did this for 18 months and after I decided to go into sales and that’s what brought me to Club Med.”

Starting with Club Med in 2008 as the sales director for Eastern Canada, Doyon rose to the ranks of VP of Canada a mere six months later.
“I had people who believed in me early on,” she recalls. “There’s my actual boss, Xavier Mufraggi, who wasn’t afraid to promote me to VP very early on. And through him believing in me, it gave me the self-confidence that I could do it.”

Doyon, who was also appointed to oversee Mexico in 2014, says her parents were her first mentors. From her mom, she learned to be empathetic, which she believes helps her be a better leader today.
“It’s allowing me to be very close to my team,” she says. “I understand them, they understand me, we have a very open channel of communication, open line of communication. Being empathetic makes me understand them better, and when you understand better, I can leverage their strengths. We need to leverage everyone’s strengths, and at the end of the day, it makes us a stronger team.”
Meanwhile, she learned to be respectful and gained a strong work ethic from her dad.
“He passed his work ethics to me, like working hard, don’t give up, if there’s an obstacle or a challenge, tackle it, go for it, and don’t be afraid once again to fail. There will always be a solution,” she says. “And mostly to remain true to myself, and true to others and to my values.”

A day in the life
Working in a quickly evolving industry, she says no two days on the job are the same.
“It’s very fast-paced, so even though I’m trying to organize my days often the to-do list changes,” she says.
Although highlights of her position include receiving great customer feedback or hitting sales targets, she says the most rewarding part of the role is watching her team evolve.
“When you see your team not only doing their job, but going above and beyond not only their role, but their actual scope and continue to develop themselves on transversal topics, it’s beautiful to see, and I’m able to do this because I’ve been in this position for now 10 years,” she says. “It’s a very fast-paced environment, so to see them develop themselves, and be more agile, within this type of environment, it is quite rewarding.”

As for the biggest challenges, she points to the factors that are beyond her control such as geopolitical challenges, currency challenges, and natural disasters.
“You could have a destination, it’s trending really well, an event happens, and unfortunately, I’ll give you an example of a hurricane, let’s say Turkoise, one of our beautiful properties was doing really well last year, and then there was Irma,” she says. “So it’s impacting our clients, it’s impacting us as an organization, it’s impacting us as a team. When all these unexpected events are happening, it’s quite challenging on the team, it creates often extra work, so once again we have to be agile, be able to take decisions quickly, try to accommodate the customers, there are many factors involved, you put all this together, and this is one of the biggest challenges I find.”
In this instance, she says Club Med used the opportunity to renovate the luxury, adults-only resort.
“We are creating happiness, we are creating memories and we’re also a trendsetter,” she says. “We’re the pioneers of the all-inclusive vacation. The company has been existing for almost 70 years now, and it’s a very strong tourism brand.”
Doyon, who spends about 25% of her time working on the Mexican market, says the next task at hand is launching Club Med Quebec Charlevoix, the first Club Med ski resort in North America, by December 2020.
“I have the privilege to lead this project and to sponsor this project with the team,” she says. “So being a Quebecer, a Canadian person, being able to lead such a project in my yard, it’s a once-in-a-lifetime opportunity.”

Where are you based? I’m based in Montreal.

How often are you on the road for work? If we do an average, I would say it’s at least once to twice a month. Sometimes it can be a month and a half without me travelling, but the following month, I can travel two or three times during the month. It depends on the period of the year.

Do you have a favourite thing to eat at a Club Med? The white chocolate bread is one of my favourites. And the beauty of it is you find it in every Club Med worldwide.

What about a personal favourite Club Med? It depends on what I’m looking for in a vacation. If I go as a family, I love places like Punta Cana, I love places like Cancun, Ixtapa, which are great – my son is happy, my husband is happy. After, if I want to go relax, it’s another type of vacation, so it’s another property. It could be Columbus Isle in the Bahamas, or it can be Cefalu in Italy, so it really depends on which mood I’m in. We have so many beautiful properties it’s hard for me to tell you one in particular!

What’s a memorable moment that happened on location at Club Med that stands out? I saw my son for the first time swimming without swim aids at Club Med Ixtapa. So that was for me a really proud mommy moment.

What are some top trending Club Med properties? Italy for us is a big destination. It’s ranked actually one of the most popular destinations for summer travel, and for us, we anticipated this by opening our resort in Cefalu, in Sicily, right, last June and it is doing great. If we look on our ski side, because we’re the leader of mountain experience vacations, Japan is becoming a really hot new spot for North American travellers. And we opened a village last December in Tomamu, which is located in Hokkaido in Japan, where we have amazing snow, like the term in skiing, they call it champagne powder. And it’s been doing really well.