Bigger, better and on course to a bright future 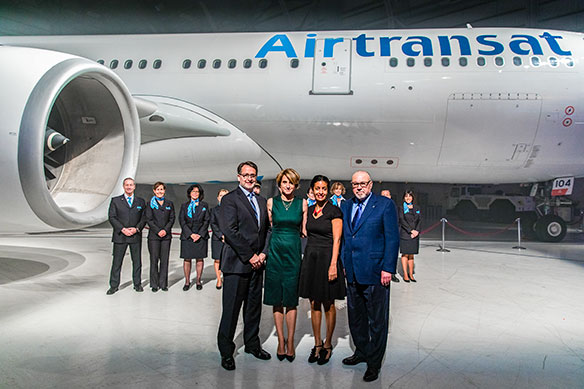 In its 30th anniversary year, the Transat group has hearkened back to its origins as a small travel agency by recommitting itself to the retail travel trade. And the group is about to get bigger with the announcement that the development of a hotel chain is in the works.
At a Dorval news conference celebrating three decades of Transat, president and CEO Jean-Marc Eustache reminisced that the multi-unit company began life as retail outlet Tourbec, which grew into modestly-sized tour operator Trafic Voyages, which, in turn, became Transat when the organization went public, founded its own airline and adopted the Transat name.
Fast-forwarding to the present day, Eustache stated, “Our commercialization and customer care centre teams work in a coordinated fashion with the thousands of travel agencies that sell our vacation packages and air tickets in Canada.”
“We are also continuing to support our own bricks-and-mortar distribution network, comprising 465 agencies across Canada, which has played a big part in our success over the past 30 years.”
And he pointed out, “In 13 European countries, as well as in Israel, our teams are also building durable relations with travel agencies for the sale of Air Transat flights.”
Stressing that Transat “strongly believes in the strength of the distribution network that remains entirely relevant,” Eustache said that, despite a changing market and online competition “Over the past three years, bricks-and-mortar agency operations have been holding their own; notably in the US, but also in Europe and in Canada.”
Turning to the company’s hotel aspirations, the long-time chief exec told reporters, “Our ambition to become a fully-fledged hotelier is taking shape. After a 10-year relationship with Ocean Hotels, we now seek to leverage our knowledge of the all-inclusive segment to develop a branded hotel chain in Mexico and the Caribbean.”
He explained, “The proceeds from three transactions in the past year or so have given us the means to achieve our objective. The sale of Transat France and Tourgreece; the sale of our 35% minority interest in Ocean Hotels and the planned sale of Jonview Canada will allow us to invest in our own hotel facilities.”
And Eustache revealed, “This hotel chain, even though it will meet part of our room requirements, will be independent and aimed at a diversified customer base. We are about to hire a company president, which will mark the beginning of this major project, and our goal is to have an inventory of 5,000 rooms, directly owned or under management, by 2025.”