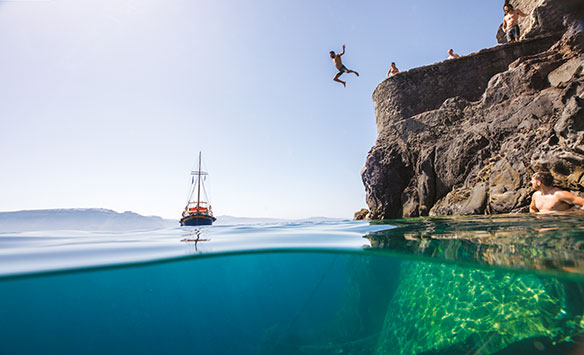 THINK ABOUT IT — HAS TRAVEL MADE YOU BETTER? WHETHER IT’S BEING MORE OPEN TO OTHER CULTURES, COMING HOME RECHARGED OR FEELING MORE CONFIDENT, THE ANSWER IS LIKELY YES.

“It’s something that we all think, that travel just makes us all better people. People who are well-travelled are always so open-minded,” Gabrielle Nydam, president of Contiki Canada tells Travel Courier. “At Contiki, we were like we can’t start saying these things anecdotally — we need to figure out why, and what are those aspects that really drive change, and is it true?”

Seeking insights on the transformative impact of travel, Contiki commissioned two third-party professional research organizations to survey 18 to 35 year olds from across Canada and compare the results from travellers against those who had never travelled internationally.

“What we found was there were multiple ways people felt they came out better. There was one part about confidence, the sense of belief in oneself did come out stronger for people who have travelled versus people who have not travelled,” she says. “They were actually more confident, they were better problem solvers when they got back, and they were also more satisfied with their employment and their employment opportunities. So, there was this sense of I’m actually really confident in who I am or I’m really happy to come back to my work because I really appreciate what I have.”

Called The Power of Travel, the results led the travel provider for 18-35 year olds to identify five key pillars that show how travel positively enhances the lives of young Canadians: 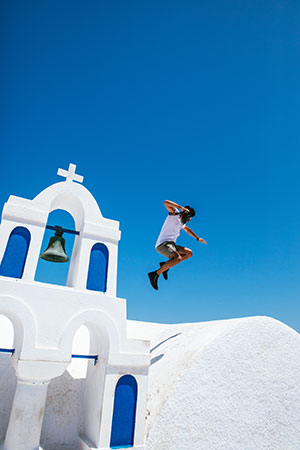 1) TRAVEL CREATES A SENSE OF BELIEF IN YOURSELF AND WHAT YOU CAN ACHIEVE.

“There was this aspect of being more confident at your workplace and being more confident in your job,” she says. “Travel gives people the opportunity to step back from their day to day, observe the country that they’re visiting, but also reflect on what’s happening back home and how they are back home. And to know that they feel more comfortable in their job, in their employment opportunities is a fantastic thing to see.”

According to the study, 59% of travellers indicated that travel experiences have improved their education and employment, and those who travel have an increased willingness to take risks or accept new challenges.

“The experiences young travellers have with Contiki push them out of their comfort zone, providing opportunities to apply open, flexible and out-of-the box thinking,” she says. “Travelling while you’re young sets you up for continued success throughout your career, which makes it so valuable for young people – especially in this competitive day and age.”

The data showed that 72% travellers believe travel has helped them learn to adapt and be resourceful in anticipated situations, compared to 41% non-travellers. Travellers also found it’s helped their ability to problem solve efficiently, and they’re 27% more likely to set goals for themselves and regularly achieve them.

“Something that also came up was open-mindedness, and I think that’s something that we all kind of recognize a little bit, but there was a sense of being open to different cultures that really was also a big benefit, so that was something that was fantastic,” she says.

Some of the notable findings included that travel has created an awareness of other cultures that has led to increased tolerance and/or compassion for 72% of travellers, versus 45% non-travellers. 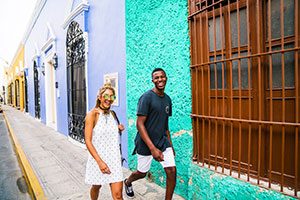 3) TRAVEL CREATES CONNECTIONS TO OTHERS.

“We saw that travellers were more likely to seek out friendships. We also found travellers also find greater satisfaction in their personal relationships,” she says. “If you’re sitting next to somebody on a coach, you’re going to get to know them really, really well. And you’re going to be putting yourself out there to have amazing experiences, and have these crazy highs.”

“When Canadians would travel abroad, the research that we found with travellers, the travellers feel a higher sense of citizenship than people who might not have travelled and that makes a lot of sense because they get to travel and see that Canada’s got it pretty good back home, and they’re also more engaged politically,” she says. “You see other cultures and then you have a sense of pride of where you come from.”

Overall, 57% felt more Canadian when they travel abroad, and 63% of travellers indicated that seeing the world has shaped their perspective on global politics. The data also found that 44% of young Canadians who have travelled abroad voted in the last federal election, compared with just 28% of Canadians who have never been outside of the country.
“We also found that people [who travel] would actually also be more engaged with their own municipal or local government,” she adds. 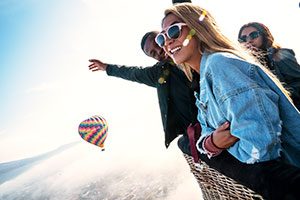 The key to happiness? It may just be travel!

5) TRAVEL CREATES A HAPPIER YOU.

For Nydam, the results really drive home the importance of taking vacation time, especially among millennials who are beginning their careers.

“[Millennials] are new to the workplace often times, they’re getting going in their careers, so they’re very dedicated to their workplace and they’re very dedicated to putting in all the hours they need to put in,” she says. “And sometimes they lose track of what’s important to them and so just reminding them that we’re going to have a low season now, it’s a great time for vacation, it’s really important to do.”

From a manager’s perspective, she suggests they evaluate if their team is getting enough vacation time, and if they’re actually taking it and come back feeling recharged.

“Using your vacation days to travel should be seen as an investment in one’s personal growth by young people and their employers,” she says. “Not only does the experience leave them refreshed and ready to tackle the workplace, but it has a real, tangible impact on their performance in their role, which should be embraced, celebrated and encouraged.”

As for travel agents, she says the trade can utilize the results as selling tips to encourage clients to take a break.

“I do encourage people to have a look at the research because why people might be motivated to travel can really help you guide them to where they might need to go and what kind of experiences they might need,” she says.
www.contiki.com/six-two/power-of-travel 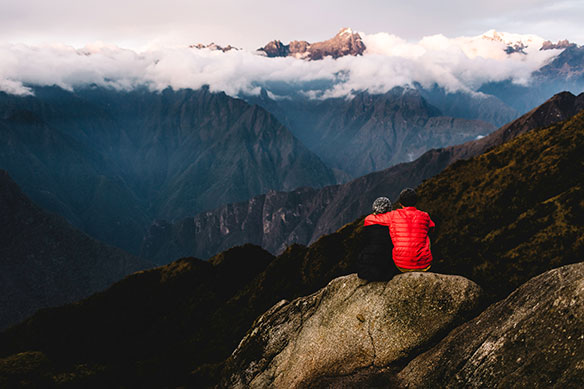