Turkey’s past receives another accolade 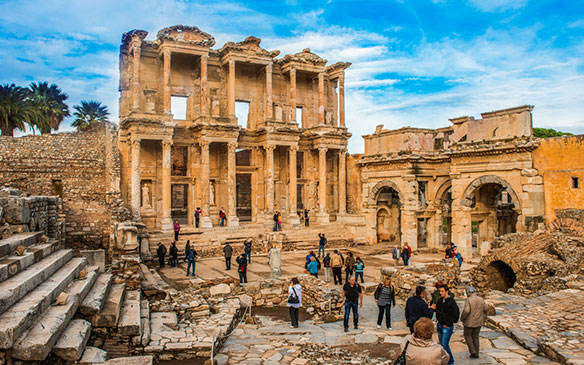 (Photo above: Ephesus is a spectacular showcase for Turkey’s long history.)

The UNESCO World Heritage Committee clearly loves ancient Turkish ruins named after the ancient Greek goddess of love.
The committee added the ancient Greek city of Aphrodisias, found in what’s now western Turkey and named after Aphrodite, to its World Heritage List this year, one more example of weighty recognition for a country that has seemingly endless reminders of its long past for tourists to visit.
And, says Derya Serbetci Acar of Toronto’s Turkish Culture and Information Office, it appears interest in Turkey’s tourism attributes is on the upswing again. Last year saw Turkey have to contend with terrorism and political upheaval, raising concerns among some that its tourism trade would suffer in a major way.
But Serbetci Acar says Turkey’s tourist trade is looking very healthy this year.
Tourism rose 14% in the fist six months of this year, with June alone posting a hefty 36.5% increase from June of last year.
Turkey, the sixth-most visited country in the world in 2015, has set an ambitious goal of hosting 50 million visitors by 2023.
Much of Turkey’s popularity results from its history, underscored by its many archeological sites, among them Ephesus, dating back to the 10th Century B.C. and shaped by the Romans, ancient Greeks and others. The Vatican has identified an Ephesus-area home as the home where the Virgin Mary spent her final years.
Istanbul – in the unique position of straddling the perceived boundary between Europe and Asia – is another cornerstone of Turkish tourism, home to the likes of the Grand Bazaar, which houses more than 4,000 merchants and which tourists frequently hire guides to lead them through because of its sprawling size.
Istanbul – named Constantinople by the Romans – was a capital of the Roman/Byzantine and Ottoman Empires and features many remind-ers of the Ottoman Empire tourists can enjoy.
History enthusiasts can also visit Gallipoli, site of fierce fighting in World War I and made famous in part by the movie of the same name.
“Turkey is a very unique destination with a lot of history but Turkey is much more than history,” Serbetci Acar says.
Among other tourism pluses for the country is its long Mediterranean coast that’s hugely popular with European sun-seekers and which includes a stretch of coastline Mark Antony gave to Cleopatra as a gift; the moon-like landscapes of Cappadocia; Mount Ararat, which some believe was the final resting place for Noah’s Ark; and medical tourism.
Serbetci Acar’s office participated in the Toronto Golf Show, surprising show-goers who she says didn’t realize Turkey has many golf opportunities.