Home › Digital Post › US CBP executive clears up some misconceptions

US CBP executive clears up some misconceptions 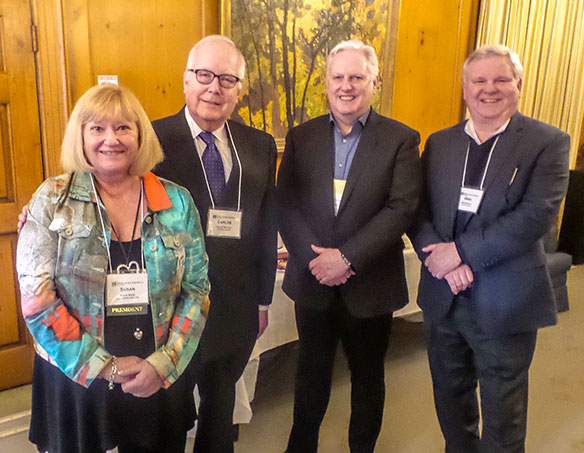 (Photo above: On hand for the event were Susan Webb of Discover America; Carlos Mercado of KCM Services of Rochester, New York; Paul Larcher of VoX International; and Greg Marshall of Visit Rochester.)

The man who oversees US Customs and Border Protection’s presence at Toronto’s Pearson International Airport says the United States remains a welcoming nation for both those wanting to visit it for vacations and people needing to travel there for business and uses CBP statistics to demonstrate that.

Lee DeLoatch told a recent Discover America gathering in Toronto that there were some 7.1 million instances of people leaving Pearson for different points in the United States last year and fewer than a 10th of 1% of those who arrive at the facility bound for the US are denied entry to the country by his department.

User friendly
DeLoatch said most people pass through US Immigration pre-clearance within a minute, with advances in technology expediting the process with his “user-friendly organization.”

There have been suggestions in some quarters that the current US administration isn’t welcoming to many of those wishing to visit the United States, with some government critics charging it’s adopting a stance that amounts to what they dub “Fortress America.”

But that, DeLoatch said, isn’t the case, with the US being “open for business” and seeing more foreign visits over the course of a year than there are Americans.
Tourism remains “very important” to the US economy, he continued.

But he cautioned that travellers who are unsure if there may be any issues with their crossing the border should “do all their homework upfront,” possibly contacting his department or a US consulate beforehand if they’re unclear on anything.

Safe and sound
Greg Gumbs, US Custom and Border Protection’s branch chief at the Toronto pre-clearance office, cautioned travellers that they must have the appropriate documentation, adding there are “bad folks… who are up to something nefarious” that his department must watch for.

“Our goal is to… see those aircraft go up safely and come down safely,” he added. “We want everyone to come [to the United States] and have a good time.”

Gumbs said he realizes many people become nervous when speaking to an immigration officer, but added that it’s a “very low percentage of people that will be refused” when trying to cross from this country to the United States.

Meanwhile, Gumbs said those who feel that they have been dealt with unfairly by a US immigration officer can ask to speak to an on-duty supervisor.

The presentation prompted Discover America’s Susan Webb to state that “we [those in tourism] have learned that we have to educate the people we’re sending” across the border.