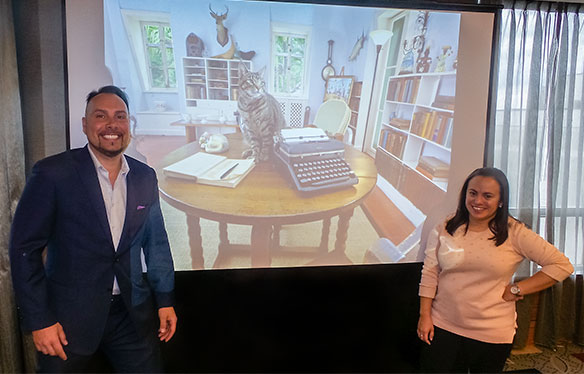 A publicist for The Florida Keys & Key West says the tourism infrastructure in the island archipelago off Florida’s southern coast is steadily rebounding after parts of it were battered by this fall’s Hurricane Irma.
Ashley Serrate told a Dec. 1 Toronto gathering that tourism facilities in some parts of the Florida Keys are operating normally, while “some areas need more time” to recover.
The area was closed to tourists for three weeks after the Sept. 10 hurricane.
But Serrate said there are enough lodging options and attractions available now to ensure that vacationers will enjoy their stays in the Florida Keys, known for its relaxed atmosphere.
“We understand travellers have choices for their destinations,” she said. “We honestly believe visitors [to the Florida Keys] will have a satisfying vacation experience…
“There’s a common misconception that we were wiped off the map… We’re still here.”
Serrate used a video made after Irma that featured one of her colleagues standing on a beach to underscore her message that the Florida Keys can now successfully host visitors.
Islamorada is one part of the Florida Keys that saw major damage, and a little more than 60% of its accommodations are now available. Serrate suggested that those wanting to visit Islamorada can do so, but overnight elsewhere in the Florida Keys if they don’t find suitable Islamorada accommodations. Most Islamorada restaurants are open.
All but two hotels on Key West are open, Serrate reported.
Damage to Florida Keys coral reefs is still being assessed, with Serrate stating that those reefs “may look a little different if you’ve dived them before, but they’re still there.”
Serrate conceded that parts of the Florida Keys look a “little less green,” and visitors will see debris from what was a “very significant storm” in some areas.
Serrate praised the resiliency of the heavily tourism-dependent Florida Keys, reporting that one hotel owner bought his own backhoe after Irma, so he could speed up reconstruction efforts at his damaged property.
She added some Florida Keys hotels have discounted rates as they work to attract visitors.
Meanwhile, Serrate said there are certain things that can only be found in her destination, among them an annual Humphrey Bogart film festival.