Whale watching operators part of solution to save killer whales 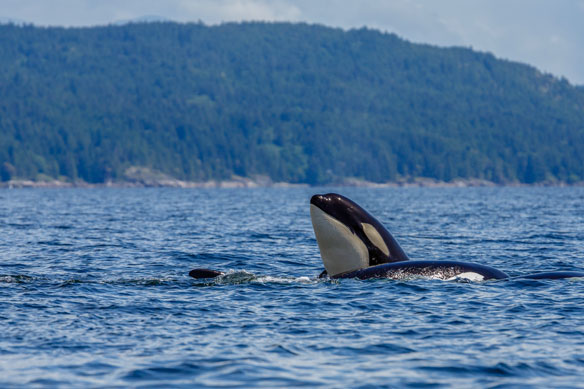 Last summer, the plight of a diminishing species of killer whale in BC waters was highlighted in the media by the spectre of a southern resident killer whale carrying its dead infant for two weeks. The infant was apparently a victim of increasingly difficult conditions in the seas near Vancouver Island, including a shortage of the Chinook salmon that they feed on. The story and images online and in the press caused sympathy and outrage around the world.

Now, a call for a ban on the commercial watching of the endangered southern resident killer whales has been presented. It was tabled by a governor’s task force in Washington state, as one of 34 recommendations to the governor on finding ways to save the southern resident orcas.

These creatures number just 74 in three related pods. The whales are usually encountered off the southern end and west coast of Vancouver Island in Canada, the Georgia Strait and the inland marine waters of Washington state in the US – an area of water known as the Salish Sea.

Whale-watching companies from both countries transit the international border that dissects the Salish Sea with regularity, protected under laws that allow such crossings, as long as no landing is made. This freedom gives the companies the ability to track and watch whales, regardless if they have crossed the US/Canada border to do so.

Counter proposal to ban
The proposed ban was met with a counter proposal by the Pacific Whale Watch Association (PWWA), which represents the interest of 32 whale-watching companies in both countries. The association agrees with the goals of the Governor’s Southern Resident Killer Whale Recovery and Task Force to protect the health of that orca species population, and supported most of the actions recommended in the report.

But it urged implementation of recommendations that address the critical issue of the lack of Chinook salmon in the waters of the Salish Sea, and to focus on science-based solutions supported by research partners like the Center For Whale Research, Orca Conservancy and the Orca Behavior Institute.

As such, “the association feels strongly that recommendation 28 restricting viewing on the southern residents was not properly vetted, and the implementation will lead to unintended consequences. PWWA is working in partnership with the scientific community to develop a science-based vessel management plan to mitigate risk of harm to the southern residents.”

Instead of an outright ban, “the PWWA looks forward to continuing conversations about vessel activity around each of the 74 southern resident killer whales. As studies have shown, vessel speed is a primary driver of sound, and we are proud that our boats already maintain a slow zone around the whales and model this behaviour for others in the area.”

Other cetacean choices
In any case, the ban would not have a severe impact on the whale-watching fleet in the Salish Sea, says a whale-watching company co-owner. “No, there wouldn’t be a big difference in viewing for customers,” says Brett Soberg of Eagle Wing Whale & Wildlife Tours in Victoria. He notes that the frequency of sighting of the southern residents is relatively low, at about 10% to 15% of all whale watching trips.

“There are lots of other options for cetacean (whales, dolphins, porpoises) viewing in the area,” says Soberg, indicating that other species like transient killer whales, humpbacks and grey whales, may also be seen on a whale-watching trip.

“Most days (95%), there will be other options,” said Soberg. “Even with the moratorium, it would be mostly business as usual.”

If the proposed moratorium does become law, whale-watching boats would have to leave the area when the whales being observed are identified as southern residents.

Rather than lose the option of choice, the PWWA would prefer an emphasis on solutions such as mandated lower speeds for ships like freighters, oil tankers and ferries, as well as the development of quieter motors.

But, most crucially, the association looks forward to the restoration of fish populations in the Salish Sea, which have been greatly depleted by commercial and recreational over-fishing, water toxicity, fish stock management policies, climate change, and fish farm hatcheries.

“Chinook and herring are key to supporting life in the Salish Sea,” said Soberg. “Their restoration is essential to the survival of the southern resident killer whales. Time is the critical factor for saving this population.”

The federal government supports this outlook and has announced that it will fund the creation of new ocean sanctuaries for whales – including southern residents – in BC waters. The federal Fisheries and Oceans department says that it is in the process of consulting on these critical habitat areas and that it expects to be able to move forward on those in the next few months.

Funding for the sanctuaries would be used to improve prey availability (salmon) for the whales, and regulate or restrict shipping activities there.