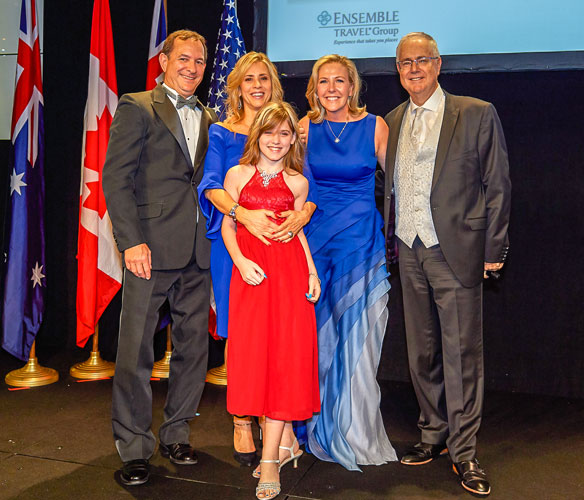 It was as if Elvis were inside the building. Somehow, an electric buzz as strong as the sixties high notes heard during the week commemorating the organization’s 50th anniversary lifted the spirits even higher. 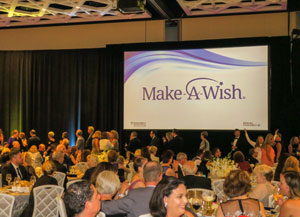 The packed house anticipated the auctioneer’s calls, but things changed when he regaled, “Canadian dollars at par.” The buzz turned even more electric. Ensemble members from Canada’s Great White North, who earlier watched their American members fan their auction paddles, suddenly swooped down to seemingly outbid their counterparts across the room.

The Make-a-Wish auction is a keystone pillar to the Ensemble family fold. “So, I love sitting at what I call the ego table,” confides co-president Lindsay Pearlman in watching partners adding surprise items to the live auction where the charitable acts turn into stiff competition. “Well, if you’re going to put that in, I’m going to put this in. People were lining up to make their donations, and people were high-fiving them. It was so inspiring to see that,” he told Canadian Travel Press the next day.

Making dreams come true
Ensemble Travel Group’s charity efforts to Make-A-Wish® not only broke a record for the organization but the dollars raised strongly surpassed the million dollar goal set in the previous eight years. That star-studded gala night, Ensemble raised $272,000 for Make-A-Wish which is an all-time record for the travel organization. To date, Ensemble’s total Make-A-Wish contributions: $1,142,000.

The audience heard how one advisor who couldn’t attend the conference saved all her commissions for a year to donate it to Make-A-Wish. “What a night of love and generosity from the entire Ensemble family – members, partners, staff … all coming together as ‘One Ensemble’ to support these deserving children and their families,” said co-president Lindsay Pearlman, who gave a shout out to staff members Chris Lackstrom and Sandra Lowe-Brown for their work in making the annual event a success.

He told the members,“Our business is all about making dreams come true, and tonight was truly a shining moment in the 50-year history of Ensemble Travel Group.”

Sharing stories
Each year, a Make-A-Wish child and family share their story at the black tie gala. This year’s special guest was no exception. The entire audience listened and watched as 12-year-old Bear and her mother Mimi took to the stage. For her wish, Bear who loves fashion and design eloquently relayed to a full room of strangers about her travels to New York City to meet fashion icon Diane Von Furstenberg.

Ensemble partners Ellen Bettridge of Uniworld and Tim Frederick of Delta Air Lines, whose company has made complimentary air donations for the past four consecutive year, surprised Bear and her mom with the donation of air transportation plus a river cruise. Mimi and her daughter later told CTP how the entire process was one of disbelief. “We couldn’t believe it. We didn’t know what to do,” she says rethinking the episode that will see her daughter and family embark on a Uniworld Cruise. 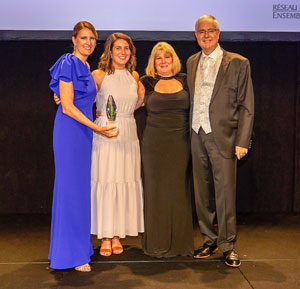 Kemp Travel Group, a privately owned family-run agency operating for 30 years, has been a strong Ensemble member for 15 years. The agency which shares best practices with other members is also recognized as a top producer in the Ensemble Elite status category. Guests heard how the Kemp’s commit countless volunteer hours spanning across the globe to places like India where daughter Erin has helped distribute bed kits to children in need, as part of the Sleeping Children Around the World global organization.

In addition, the Kemp family recently donated $2 million to their local Bowmanville Hospital Foundation, the largest gift received by the foundation in support of the hospital toward its redevelopment and expansion project. Mother-daughter team Sheila and Erin Kemp received strong applause, as they took to the stage to accept the new “Warren Buckner Innovation Award.” 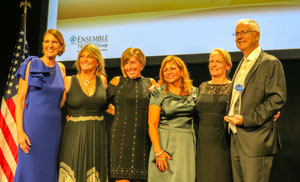 Excellence rewarded
Earlier in the evening, co-presidents Libbie Rice and Lindsay Pearlman awarded the top-producing members in Canada and the United States at the organization’s annual Circle of Excellence Gala. Rice announced the last three years as the best in the organization’s history. “We saw even greater returns (last year), so congratulations to this circle of market leaders for pushing the bar to record-setting levels at Ensemble and for our preferred partners.”

The organization’s top Canadian producers based on 2017 sales of Ensemble preferred partners:

In the “Highest Growth Award” category, regional producers with the highest year-over-year growth based on 2017 preferred partner sales compared to 2016 are: Go Travel of Carstairs, Alberta; Romantic Planet Vacations of Burlington; and, The Unity Travel Shoppe of Unity, Saskatchewan.

In addition to the Circle of Excellence Awards, Ensemble Travel Group awarded other members at the conference. Cruise Vacations of Winnipeg received the “Top Canadian Shareholder Engagement Award,” for participation and support of the organization’s events, technology, and marketing. Direct Travel Service of Ponoka, Alberta; Prelude Travel of Kenora; and Voyages 123GO of Blainville, Quebec, received the “Above & Beyond Award,” demonstrating many of Ensemble Travel Group’s core values (integrity, purpose, passion, community/family, innovation, and profit).