Where will your clients go? 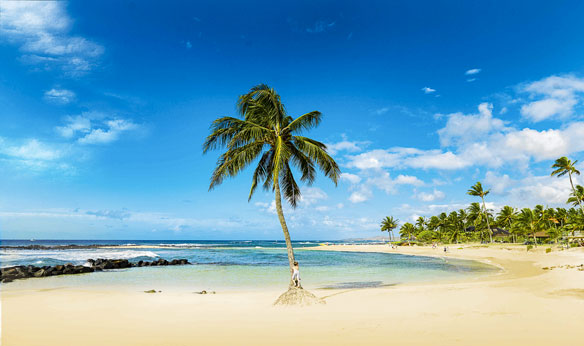 Pictured above: Hawaii is just one of the destinations that agents are reporting that their clients are considering for a winter vacation.

As Canadian airlines and tour companies recommence service into key Caribbean destinations following Hurricanes Irma and Maria – making it clear that the region was open for business – Canadian Travel Press spoke with a number of travel agents who told the publication that right now it was unclear where their customers would choose to travel this winter. [Editor’s Note]

Mother Nature’s wrath is being felt by the travel agency community these days.
Hurricanes that have been battering some Caribbean islands and parts of Florida, and the earthquakes that rocked Mexico City are leading some Canadians to reassess their upcoming travel wishes, with travel agents having to reaccommodate them.
“Mother Nature’s not really liking travel agents right now,” Theoni Mihalopoulos of Calgary’s Crowfoot Travel Solutions said last week.
She said it’s often unclear right now where people will choose to vacation this fall and winter, with a number of Caribbean islands seeing devastating damage.
However, there is interest in Hawaii and the Far East, with Mihalopoulos reporting that she’s getting inquiries about Thailand and Vietnam.
Roger Boyajian of Toronto’s Sevan Travel said it’s a “good question” about how the Caribbean will fare in the next while, with “nobody” asking him for it right now.
It’s unclear when interest in it will rebound, he said.
Like Mihalopoulos, he is seeing interest in Hawaii, and far-off Tahiti is being looked at.
Interest in Europe, including Italy, continues, he added.
Lisa Billings of Maritime Travel in Moncton said she’s certain “there will be some places we won’t be able to offer [in the coming months] because of the hurricanes.”
She’s confident that traditionally popular Cuba – which saw damage to some parts of its north coast – will rebound, but “will have a lot of hard work ahead” as the rebuilding takes place in damaged areas.
But she added that Mexico – also perennially popular – “is pricing out really well,” and she too has high hopes for Hawaii, which has seen expanded air access and has nice accommodation options. Cruises also remain attractive, Billings continued.
Milka Cook of Collacutt Travel in Toronto said her clients are “now trying to avoid weather that could destroy their holiday,” and some of those people are setting their sights afar, eyeing the other side of the Pacific.
“When you suggest Australia, New Zealand or the Far East, they always think it’s a long way, but once they get over that hurdle, they’re very excited about it,” she reported.
Former ACTA president Ron Pradinuk said both Thailand and Vietnam are both “excellent” destinations for those now seeking winter holidays.
Tunisia’s tourism trade is also rebounding, he stated.
Meanwhile, Boyajian expressed concern about the fate of residents of Caribbean islands hit by Hurricanes Irma and Maria. Those islands are often heavily dependent on tourism revenues and residents will suffer economically if tourists stay away, he noted. “It’s a pity.”