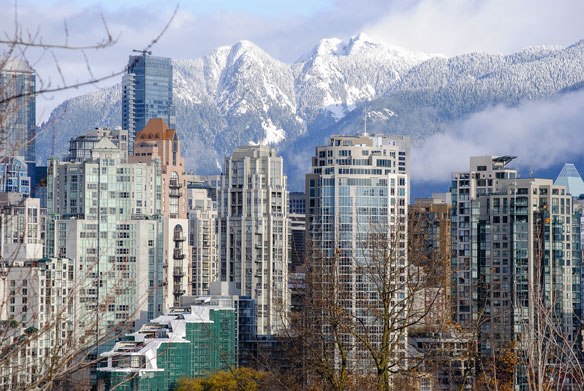 It’s no surprise that Canada has been ranked as one of the most favourable destinations to visit and live among the global LGBT community.
The highly reputable and LGBT advocate on global gay and lesbian issues, “The Economist Magazine,” recently published and reported the top 10 most liveable cities for 2017 based on various categories and factors, including stability, health care, culture, environment, education, and infrastructure; Vancouver, Toronto and Calgary among the three Canadian cities named as some of the best places to live in the world, according to a report by The Economist.
Top 10 cities (in order of rank):

In addition, I have indicated in the past that various LGBT publications and reports ranked Canada as a key and most favourable destination to visit. A landmark global event that provided a platform to recognize Canada as a safe and inclusive destination was “World Pride” hosted in Toronto, Ontario, from June 20 to June 29, 2014, as voted by a prestigious globally recognized committee, InterPride, an international association of pride coordinators.
Being a Torontonian, I could not have been prouder to be a supporter, contributor and reveller in the “World Pride” multi-day festivities leading up to the parade, the most celebrated event among the LGBT community.
Over the years, Toronto has set the stage as one of the most diverse scenes and hub to our Montreal neighbour offering a European “je ne sais quoi” to its vibrant gay nightlife. As I reported on Aug. 24 in Press Today (www.travelpress.com/celebrating-pride-montreal/#.WcqmHbJ951s), the very first Canada Pride was hosted in Montreal, Quebec, with festivities from Aug. 10 to Aug. 20 welcoming travellers from around the world ending the multi-day event with the largest crowd to attend a pride parade.
It’s worth mentioning once again that Justin Trudeau marched in the “Canada Pride” parade accompanied with the Prime Minister of Ireland, Leo Varadkar, representing a landmark moment as the first time a foreign head of government has joined a prime minister in a Canadian Pride celebration.
Let’s have a brief look at these Canadian cities that ranked as one of the top ten best cities to live in by The Economist:

Vancouver
The majestic backdrop of the Canadian Rockies while visiting this top 10 city leaves you breathless and wanting more. On numerous occasions, I’ve visited Vancouver on business and pleasure, and the latter never disappoints.
Last September, I hosted a trade event at the Fairmont Pacific Rim situated in the heart of the historic port with panoramic views of Coal Harbour, North Shore Mountains and the world-renowned Stanley Park. Firstly, a shout-out to the staff and event planners for an impeccable and flawless event that superseded my expectations. The calibre of quality and service at the Fairmont Pacific Rim sets the bar high, and as a customer and tourist, it’s so greatly appreciated.
There are so many quaint districts, however, my two favourites are Gastown situated in one of the oldest parts of the city stretching east from Canada Place to Maple Tree Square along Vancouver’s harbour. The Victorian-styled architecture, iconic Gastown Steam Clock and charming patio bistros and cafés line the streets for a delightful way to spend the afternoon in this picturesque and fashionable district.
My equally enjoyable district to revel in is Yaletown situated east of downtown Vancouver and adorned with cool looking brick warehouses and lined with elegant storefronts, chic restaurants/cafés, artists’ studios, and fashionable boutiques.
Dining in Vancouver, especially along the harbour, is quite a treat with a plethora of choices and my favourite this visit being Cardero’s Restaurant & Marine Pub – delicious!
Lastly, for retail therapy, Robson Street is thriving with every shop imaginable including some great dining options. For more information on Vancouver and its LGBT scene visit:
www.tourismvancouver.com/plan-your-trip/gay-friendly-vancouver/ 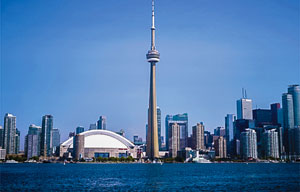 Toronto
It goes without saying how proud, as a Torontonian, that my city made the top 10 most livable cities in this prestigious list. Additionally, it’s no surprise that Toronto was chosen as the host city for World Pride. The sense of inclusiveness is very palpable as you walk the streets of Toronto and immerse yourself with such a diverse population of cultures and ethnicities regardless of sexual orientation.
Let’s go for a tour of the city with a stop at the historic Distillery District – cobbled-
stoned paths with an inspired blend of Victorian Industrial architecture and stunning 21st-century design and creativity a must visit. Next stop, Bloor-Yorkville village lined with great shops, restaurants, galleries, including some of my favourite haunts; Café Nervosa, Pusateri’s Fine Foods and renowned Executive Chef Mark McEwan’s One Restaurant.
There are so many more stops, however, let’s take this last stop and visit the gay village located in the heart of the Church/Wellesley area. The village has long been a safe haven for the LGBT community and now visited by tourists from around the world and still a popular meeting point with select bars, restaurants and shops welcoming all.
Toronto will be the host city at next year’s IGLTA Conference celebrating 25 Years from May 9–12 , 2018. For more information on Toronto and its LGBT scene visit:
www.seetorontonow.com/explore-toronto/neighbourhoods/the-gay-village/
#sm.00001bn7c7hclzd5wwgotooe8a4em 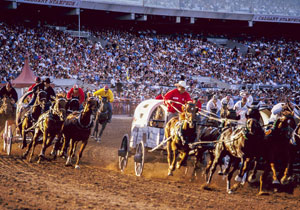 Calgary
A brief visit last year in Calgary as part of my cross-country trade events left me pleasantly surprised on how much the city changed over the years. My accommodation at the Fairmont Palliser did not disappoint, and the friendly welcome and service made my stay quite enjoyable. The location is ideal and walking distance to some cool pockets with an array of dining and shopping options. The Canadian Rockies are a short distance away and home to the Banff National Park.
The city is world-renowned for its annual “Calgary Stampede” which draws millions of visitors over the years. Back in the day when Canadian Holidays had an impressive ski program, I escorted a group of writers and editors from various US and Canadian publications with a visit to the Calgary Olympic Park with a fun luge toboggan competition among the group – this turned out to be the highlight of the trip.
There was/is something majestic about the grounds, and I’m sure even until today this still holds true – plan a visit and participate, as it leaves an indelible mark. For more information on Calgary and its LGBT scene visit: www.visitcalgary.com/maps-tools/inside-guide/lgbt-travel-guide

Armando Mendonça is a tourism entrepreneur, philanthropist supporting HIV/AIDS charities and LGBT travel expert. He can be reached at armando@baxter.net .