Discover Uganda: The Pearl of Africa 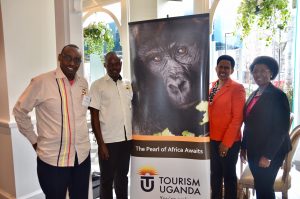 Uganda, or as Winston Churchill called it, the Pearl of Africa, was on display in Toronto yesterday (April 12) as tourism representatives were on hand to highlight the country’s unique offerings.

While the East African destination is most often associated with gorillas and the Big Five, Stephen Asiimwe, CEO of the Uganda Tourism Board, says it offers much more.

“You have wildlife, you have nature, you have the birds, the primates, you have culture, history, heritage, the weather is great all year around – and the people are fantastic, we’ve been voted the friendliest people on earth,” he told PressToday. “Uganda is a very accessible country. We have over 18 international airlines. We speak English, so there won’t be a problem with the language. It’s a very easy sell, but more importantly the experiences are pretty much a cocktail.”

Uganda, now represented by PHG Consulting in North America, is one of three countries where visitors can trek with mountain gorillas, and permits at Bwindi Impenetrable National Park come at a cheaper price tag than in Rwanda.

“Uganda was called the Pearl of Africa by Winston Churchill… because of its uniqueness,” says Doreen Katusiime, permanent secretary for the Ministry of Tourism, Wildlife and Antiquities, The Republic of Uganda. “Uganda is right at the equator, yet at the same time it has mountains that are snow capped, so it is such a unique experience to see snow at the equator. Uganda has the source of the river Nile, the second longest river in the world… so it is such a unique place to be. You can have experiences of a lifetime that you cannot get anywhere else in the world.”

Katusiime says the government of Uganda has prioritized tourism as one of its top five growth targets.

Pictured at the event are Asiimwe; Ssebaggala James, Uganda Tourism Board; Katusiime and Margaret Kyogire, deputy head of mission, Uganda High Commission, The Republic of Uganda.