Disney Provides a Preview of Pandora 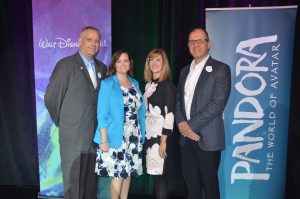 Yesterday, The Walt Disney Company (Canada) Ltd. gave the trade a sneak peek into the out of this world adventures awaiting clients with the opening of Pandora — The World of Avatar on May 27 and what’s new at Walt Disney World Resort.

“We can’t wait to transport your guests to this exotic new world,” says Marlie Morrison, Managing Director, Marketing & Sales, Parks and Resorts, The Walt Disney Company (Canada) Ltd. “You can start booking your clients right now so they can be among the first to go and visit Pandora. We recently announced exclusive Pandora Extra Magic Hours every night available for a limited time only for our Disney Resort hotel guests — give your clients a little more time to explore this amazing new destination. Pandora will be the final piece, in fact the centrepiece, of one of the most incredible expansions in Walt Disney World history.”

Departing from Disney’s Animal Kingdom — and inspired by the record-breaking box-office hit, Avatar, attractions include the family-friendly Na’vi River Journey boat ride down a river hidden within a glowing rainforest, and the Avatar Flight of Passage, where visitors can fly above the jungles of Pandora on a Mountain Banshee. For those looking to fuel up, Satu’li Canteen is the main dining location in Pandora, or there’s  Pongu Pongu, an eclectic drink kiosk.

Along with experiencing other expansions at Disney’s Animal Kingdom, such as Rivers Of Light, night time safaris, and new entertainment offerings, she says the best thing about visiting Disney this summer is a Canadian resident ticket offer.

“We’re so happy to offer something like this to Canada — to have our own Canada ticket offer — but it’s only available until May 20, so make sure your clients get those tickets now,” she says.

Some other notable news and developments: