Home › Destinations › Diverse Cuba Much More Than Sun and Beaches

Diverse Cuba Much More Than Sun and Beaches 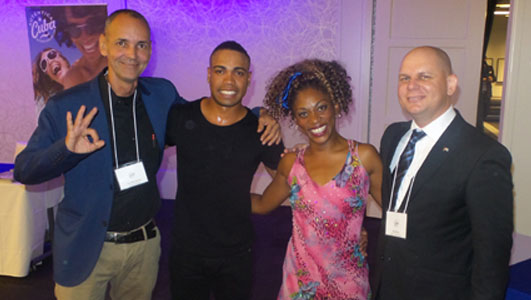 The impending arrival of Jack Frost has the Cuba Tourist Board gearing up for the busy winter season.

“Cuba is not just sun and sand. It’s a diverse destination,” one official from Havana told the audience.

Event speakers praised Cuba as a safe part of the world and noted it is gaining new hotels and seeing existing ones renovated.

The audience was also told that tourism authorities are committed to spreading WiFi throughout tourist destinations.

The event featured both Cuban musicians and salsa dancers, with salsa dancing and music being a mainstay of Cuban culture.

“If you do a tour, in Cuba, it’s like a tour around sound [music],” Ricardo said.

The evening also saw numerous prizes given away, including a stay in Havana’s storied Hotel Nacional de Cuba, which Ricardo labelled an “icon of the city.”

Pictured are Ernesto Manzanares, manager of the Faro Luna Diving Center in Cienfuegos; the evening’s salsa dancers; and Eloy Govea, manager of the tourist board’s Toronto office, who demonstrated his own salsa skills on the dance floor.