Home › Destinations › Behind the Scenes of Corner Gas

Behind the Scenes of Corner Gas 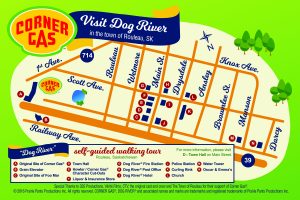 In honour of Canada’s 150th birthday, the producers of the Corner Gas franchise, in association with the Town of Rouleau, Sask., have launched an interactive Corner Gas – Dog River Walking Tour.

Dog River is the fictional town featured in the smash hit Canadian television franchise Corner Gas, about small-town life in the Prairies. The franchise includes the upcoming series Corner Gas Animated, launching on The Comedy Network in 2018. A ribbon-cutting ceremony and inaugural walking tour was held in Rouleau, a 40-minute drive from Regina, July 5, offering sneak peeks of Corner Gas Animated locations.

Corner Gas commemorative bronze plaques with QR codes and a detailed map of the Corner Gas – Dog River Walking Tour are located at points of interest on the tour. Postcard-sized maps of the tour are available at the Rouleau Community Complex, Tourism Regina, Tourism Moose Jaw and the Moose Jaw Western Development Museum. The map and animated images of Dog River sites are available on cornergas.com.

Visitors can use their smartphones to scan QR codes for behind-the-scenes details, depictions of the site in the series, the movie and Corner Gas Animated. Fans are encouraged to share photos and comments using #DogRiverTour. 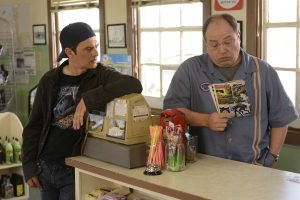 “Corner Gas fans can visit our town and enjoy the digitally interactive, self-guided Dog River Walking Tour with a sneak peek of the locations as they appear in the new animated series,” said Rouleau Mayor Grant Clarke. “With Corner Gas Animated launching in 2018, we are thrilled that Rouleau will continue to be a tourist destination for years to come.”