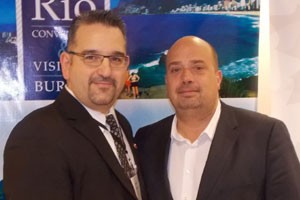 In Toronto, the event welcomed between 70 and 75 retailers, who had the chance to discover everything they need to know about Rio as the city gears up for the 2016 Summer Olympics. The workshops are also slated to make stops in Montreal, Calgary and Vancouver.

Tony Celio, manager, specialty sales for Air Canada, told Press Today that Brazil is a strong market for the carrier. AC introduced its thrice weekly service to Rio in December of 2014 to compliment its daily service to Sao Paulo and judging by the agency response at the Toronto workshop, business is good and getting better.

Michael Nagy, commercial director of the Rio Convention and Visitors Bureau, told retailers attending the workshop that since the World Cup and as the city gears up for the Olympics, Rio has changed.

“It has a whole new dynamic,” Nagy said, “ It is better for us and that makes it better for the visitor.”

He pointed to a range of new attractions, new hotels, an expanded Metro system, a revamped airport that have revitalized the city.

“Rio was already a fantastic destination,” Nagy observed, “but now it is even better.”

For more on Rio, go to http://visit.rio/en/home-2 and for more on the Convention & Visitors Bureau, check out http://www.rcvb.com.br .

And watch for more on Rio in an upcoming issue of Canadian Travel Press.

Seen in the photo, from l to r, are Air Canada’s Tony Celio and the Rio Convention and Visitors Bureau’s Michael Nagy.